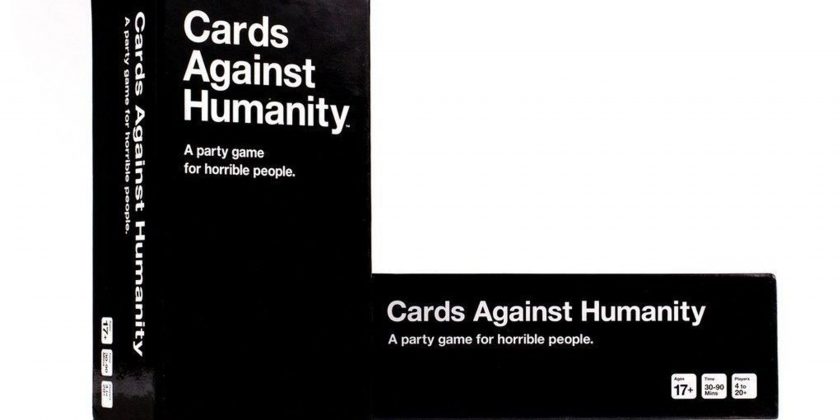 Look no further: here’s the funniest and most outrageous Black Friday deal of the year.

“Cards Against Humanity,” the controversial card game company, built a special Black Friday website this year: 99percentoffsale.com. The products cover a wide berth of prices, but all had one thing in common: they were sold  at a 99 percent discount.

“This year, we want to remind everyone of the reason for the season: deals,” the website reads. “Holy (expletive) have we got some deals… As the ancient Mayans foretold, a savings event of this magnitude only occurs once every thousand years. Act now while supplies last.”

This may seem like it’s just a prank, but the company assures site visitors the sale is legit, despite the fact that the sales seem “too good to be true.”

“This is a financial catastrophe for our company,” the FAQs joke. “In the long run, we hope to make it up in volume. We like to think we’re following in the footsteps of our hero, Jeff Bezos.”

Buyers have also been tweeting their confirmation emails, and “Cards Against Humanity” co-founder Max Temkin assured shoppers these purchases are for real.

“We have most of these items in hand at the office here (and our office is filled with crazy stuff right now),” he wrote in an email to Business Insider. “This is 100% real and possibly a very bad idea.”

This isn’t the company’s first foray into out-of-the-box stunts. During a 2015 Black Friday event, the company made $70,000 while making it clear they weren’t even selling anything. Last year, they purchased a portion of land near the border to make it “as time-consuming and expensive as possible” for President Donald Trump to build a border wall.

We compiled some of the strangest items that sold this year, ranging from interesting to really, really weird.

The website boasts this as a “$100 value!” They also dub it “as big as money goes,” which may not be quite as true.

Bloom’s days as a Hollywood heartthrob may have been in the early 2000s with breakout roles in “The Lord of the Rings” and “Pirates of the Caribbean,”  but, as the description notes, he’s “still pretty hot” and “there are worse actors.” Plus, it was only 75 cents.

Channel your inner Britney and satisfy your sweet tooth at the same time with this dentist’s nightmare. For  $1.29 , buyers nabbed this 27 pound “sticky” treat.

4. A 50-pound wheel of cheese from Costco

This one’s a little questionable. It’s described as “a poncho you can poop in,” which is supposedly great if you want to “avoid long bathroom lines.” Use at your own discretion, but for only 9 cents, this one wasn’t a huge gamble.

This poncho toilet is the perfect gift for the gamer in your life! Only 9 cents. https://t.co/GWw4440dbypic.twitter.com/ltJJOYAhts

For $5.79, the buyer of these bags won’t have to worry about going hungry for quite some time. We’re also guessing they’ll never want to look at another garbanzo bean again.

Originally priced at nearly $2,000 — which seems more than generous, one lucky shopper nabbed this piece of cinematic history for just  $19.95. “Cards Against Humanity” called this one “the titular cone from the eponymous head” and “disgusting.”

Folks, we've still got some incredible deals left. Like this one! You'll never be closer to @dan_aykroyd than when you're wearing his actual cone head from the movie "Coneheads." Just $19.95 https://t.co/GWw4440dbypic.twitter.com/4rfuJtsBie

According to the site, this poster, originally found on eBay, was signed by Rachel McAdams (who played Regina George) “through her car window while leaving Jimmy Kimmel Live,” Amanda Seyfried (Karen Smith) “at an Italian restaurant” and Lindsay Lohan (Katy Heron) “at a radio station.”

“Cards Against Humanity” challenged the buyer to “make up your own story for why Jimmy Carter signed this guitar.” Your guess is as good as ours, but for $23, do you need a reason?

The card company is also selling a new expansion pack of cards they claim is 99 percent off, as well. The 300 new and “pretty good” cards are “on sale” for $20, but we think it’s safe to say their regular price might not actually be $2,000.

Up next for sale is a guitar. A guitar that has been signed by Jimmy Carter. Shut up, don't ask questions! Just buy it! https://t.co/D5nlSuemvupic.twitter.com/0aj6XbP1uY