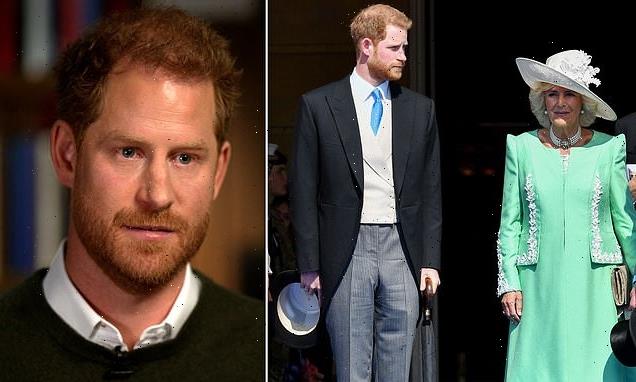 Camilla ‘has been left astounded’ by Prince Harry’s comments – as sources say the Duke is ‘on a path of self destruction’ and ‘fails to see the irony in his behaviour’, royal editor claims

The Queen Consort has been ‘left astounded’ by Prince Harry’s comments in his book and press tour, sources have claimed.

The Duke of Sussex, 38, has launched a series extraordinary attacks on King Charles’ wife Camilla, including branding her ‘dangerous’ and a ‘villain’, as he continued his publicity blitz for his explosive memoir Spare.

Harry – who also reveals in his book that he and William ‘begged’ their father not to marry Camilla – accuses his step-mother of ‘trading information’ with the press in an attempt to get more positive stories written about herself, before sensationally suggesting that her ‘connections’ with the media would end up with ‘people or bodies left in the street’.

However sources told Vanity Fair the family had been shocked and devastated by the comments,  with one saying: ‘He is on a path of self-destruction. There is so much vengeance. The late Queen would have been absolutely devastated.’ 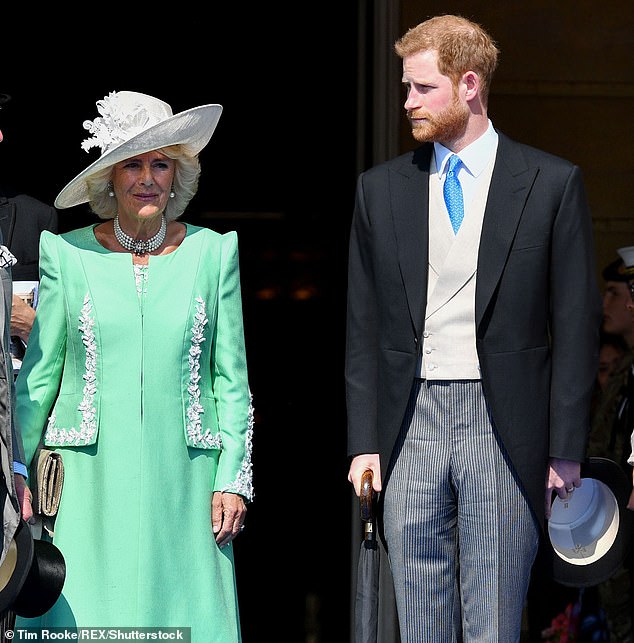 The Queen Consort has been ‘left astounded’ by Prince Harry’s comments in his book and press tour, sources have claimed

Elsewhere, insiders detailed how the Duke ‘fails to see the irony’ in his behaviour, accusing him of being the one leaking private conversations to the media.

Harry has discussed, in depth, his relationship with Camilla in both his book and his publicity tour to promote.

Harry told Anderson Cooper that the Queen Consort was content with bodies – including his own – being ‘left in the street’ as she tried to rehabilitate her image after her long affair with King Charles while he was married to Princess Diana.

Referring back to a 1995 interview in which his mother, Princess Diana, famously referred to Camilla as the ‘third person in her marriage’, Harry said that this admission turned the now-Queen Consort into a ‘villain’, adding: ‘She needed to rehabilitate her image.’ 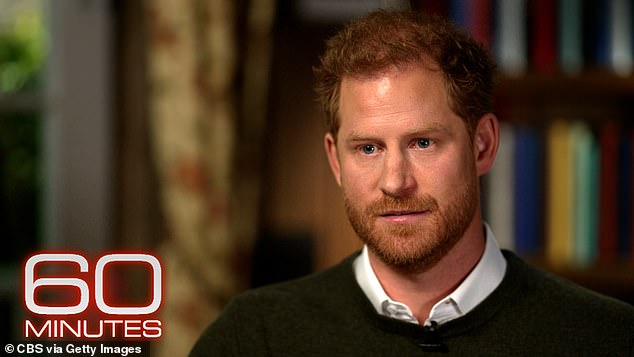 The Duke of Sussex, 38, has launched a series extraordinary attacks on King Charles’ wife Camilla

According to Harry, this desire to transform her public image made her ‘dangerous’.

‘That made her dangerous because of the connections that she was forging within the British press,’ he said.

‘And there was open willingness on both sides to trade information and with a family built on hierarchy, and with her on the way to being Queen Consort, there was going to be people or bodies left in the street because of that.’

The Duke also wrote in his memoir Spare that Camilla ‘sacrificed me on her personal PR altar’, and revealed that he and William asked Charles not to marry her, and accused her of scheming to wed the now King and become Queen Consort.

However in another interview, speaking to host Michael Strahan on GMA, he said he has ‘huge compassion for her.

Michael asked Harry ‘what [Camilla] had done’ to prompt both he and his brother to ‘beg’ Charles not to marry her, the Duke of Sussex insisted he actually sympathized with her role as the ‘third person in his parents’ marriage’, claiming that he ‘doesn’t look at her as an evil stepmother’. 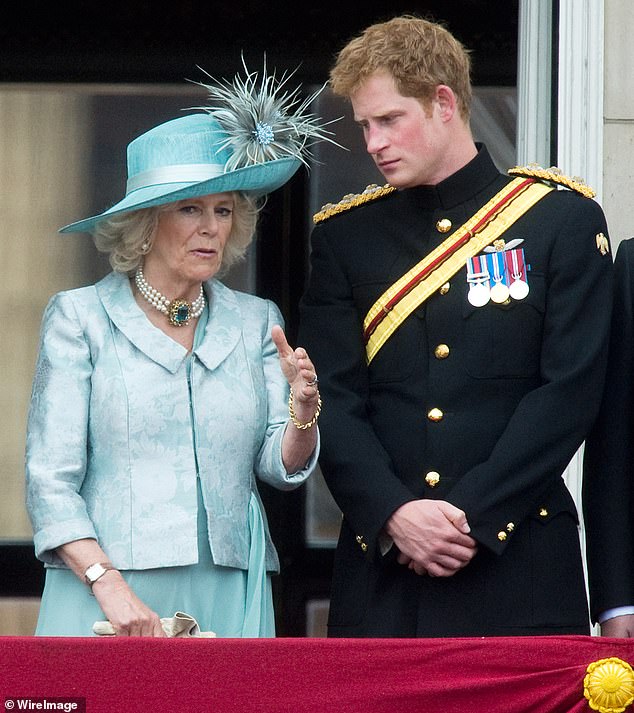 ‘I have a huge amount of compassion for her, you know, being the third person within my parents’ marriage,’ Harry told Strahan – despite telling 60 Minutes’ Anderson Cooper last night that Camilla’s affair with Charles made her a ‘villain’.

When asked where his relationship with Camilla stands today, Harry conceded that they ‘haven’t spoken for a long time’, but added that he ‘loves every member of his family’ and that when he and the Queen Consort ‘see each other, we’re perfectly pleasant’.

Ironically, Harry doubled down on those claims that she ‘traded’ stories with the press in order to ‘rehabilitate her image’ after her affair with Charles was revealed.

‘She had a reputation, or image, to rehabilitate, and whatever conversations, whatever deals or trading was made right at the beginning, she was led to believe that would be the best way of doing it,’ he said.

He went on to suggest that Camilla was only ever focused on herself – saying that she ‘has done everything she can’ to ‘improve her own image… for her own sake’. 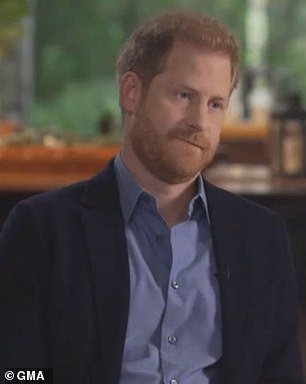 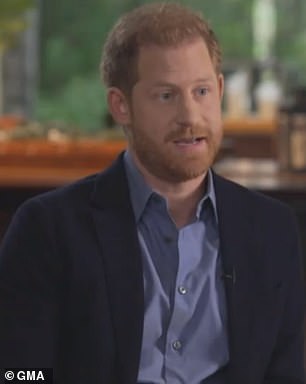 When asked where his relationship with Camilla stands today, Harry conceded that they ‘haven’t spoken for a long time’ 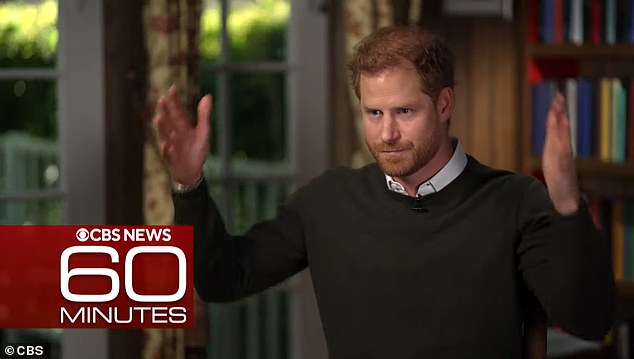 ‘She’s my stepmother. I don’t look at her as an evil stepmother,’ he went on. ‘I see her as someone who married into this institution and has done everything that she can to, you know, improve her own reputation and her own image. For her own sake.’

The Duke’s sensational public attack on Camilla was the latest in a line of barbs that he has flung at his stepmother – having already painted what Cooper described as a very ‘unflattering portrayal’ of her in his explosive memoir Spare, which was accidentally released in Spain last week. 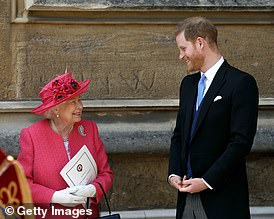 But just hours earlier, in a British interview that viewers said contained several contradictions, he told ITV’s Tom Bradby that he was not ‘scathing’ towards Camilla in his book.

Bradby was visibly stunned – as were millions of viewers – by his screeching U-turn from previous incendiary claims that an unnamed senior royal had raised concerns over the color of his son Archie’s skin.

The broadcaster raised the 2021 Oprah interview with Meghan and said: ‘You accused members of your family of racism.’

But Harry snapped back: ‘No I didn’t. The British press said that’.

There was further disbelief when Harry told Bradby that whatever he says to William in future will remain ‘private’, despite using his memoirs, TV interviews, a Netflix documentary, and a primetime Oprah special to spill the beans on what his family has said to him and Meghan behind closed doors.

He also insisted to Cooper that he ‘never intended to hurt his family’ with the contents of his book.

Drowning his sorrows! Prince Harry downs tequila shots as he answers a series of questions on The Late Show with Stephen Colbert and unleashes his latest tirade on royal family

EXCLUSIVE: Sticking to his guns! Harry is protected by armed bodyguards – with one carrying a Glock box – as he heads to The Late Show studio to record latest tirade against royal family