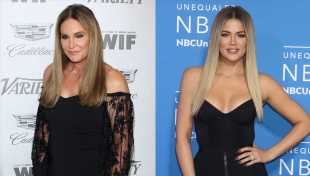 Khloe Kardashian has had some kind words for ex-step parent Caitlyn Jenner, who is thrilled that their strained relationship is finally getting repaired.

In a recent podcast, Khloe Kardashian, 34, came to the defense of Caitlyn Jenner, 69, and Sophia Hutchins‘ relationship, despite their 46 year age gap. She told Laura Wasser that “She’s really sweet. She’s younger, but she’s not bothering anyone. She’s super sweet,” of Caitlyn’s 23-year-old companion. “Caitlyn is ecstatic that Khloe has spoken out to defend her and Sophia, it means so much to her. This time last year Caitlyn was terrified her relationship with Khloe might never heal. Khloe means so much to Caitlyn, she may not be a blood relative but she truly loves her like a daughter and she’s overjoyed to have her back in her life, it’s an answered prayer,” a Kardashian insider tells HollywoodLife.com EXCLUSIVELY.

“Caitlyn and Khloe had a huge breakthrough a few months ago. They had a long heart to heart that changed it all. They talked about everything and Caitlyn apologized for hurting Khloe and Khloe was finally able to accept that apology. It was very emotional for both of them, there were a lot of tears. Caitlyn knows she still has a long way to go with Khloe, there’s more healing to do, but she’s so grateful for the progress that’s been made, it’s a huge weight off her shoulders,” our insider continues.

Caitlyn had written in her 2017 memoir The Secrets of My Life that “”Khloé has the hardest time with it,” when it came to her transition. “It is something Khloé and I should talk about privately, as we have on many occasions on other sensitive subjects. But we have not, although I have tried. We have not been the same since.” No wonder she’s so happy that Khloe is finally warming up to her again.

In the same book, Caitlyn had some not so nice things to say about ex-wife Kris Jenner, 63, and those disses absolutely infuriated that Kardashian sisters. “Khloe is the kind of person who is very, very protective of her family and friends which is why she felt the need to cut Caitlyn out in order to protect Kris. It was hard for the family as the other sisters had a relationship with Caitlyn and Khloe would just not budge. Kris actually pushed for Khloe to have the relationship with Caitlyn,” a second source tells us EXCLUSIVELY.

“Caitlyn would like nothing more than to have no drama in her life. She is really over all of the nonsense that everyone including herself has caused because she just wants to live life and be happy. She has everything she needs so having the love from family would be the icing on the cake,” a third source tells us EXCLUSIVELY. “Caitlyn is looking to get to a way better place with everyone from Kris to Khloe to everyone in between and she is looking to make everything amazing before the holiday season in a few months. Slowly but surely it is getting there and she is really happy that Khloe and everyone is playing their part to get reconciliation.”