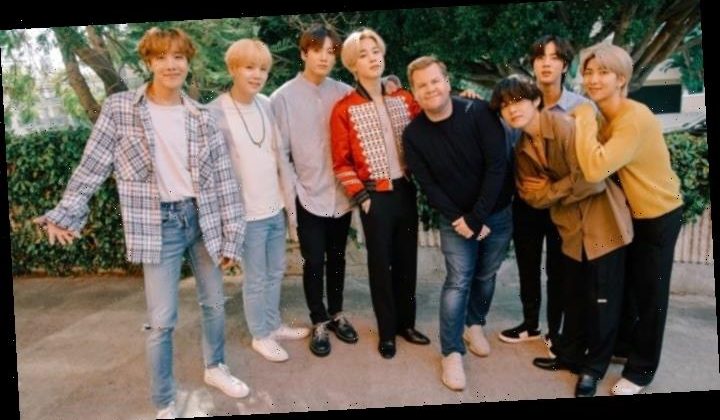 A language barrier with six out of seven BTS members was no barrier to comedy ensuing when the entire K-pop group maxed out James Corden’s SUV on a new installment of “Carpool Karaoke” that aired on “The Late Late Show with James Corden” Tuesday night.

In the 17-minute clip, the group sings along with its own “Mic Drop,” “ON” and “Black Swan” as well as Bruno Mars’ “Finesse” and Post Malone’s “Circles.” The latter singalong occurs after Corden asks the members which stars they’ve most enjoyed meeting, and Malone’s name comes up, followed by the thought that “he smokes too many cigarettes.”

The segment ends with BTS tagging along to Corden’s cardio dance class (“These are all Brentwood millionaires’ wives,” the host tells them), as they follow the class leader in shaking some moves to Iggy Azalea’s “Black Widow” before Jimin himself steps up to lead the class.

Corden talks mostly with the most fluent English speaker of the group, RM, who translates for the others as he sits in the front seat. He explains that he learned English by watching “Friends,” but it quickly becomes apparent that everyone else in the group has put in a lot of time watching the show, too, as they laugh at the invocation of the “We were on a break” meme and sing and clap along with the “I’ll Be There for You” theme.

With cameras trained strategically on all three rows of seating in the vehicle, subtitles offer translations for some of the non-English speakers’ remarks, like Jin (aka WWH Worldwide Handsome) confessing, “I don’t know what he said, but let’s laugh.”

Also up for discussion: dumplings as a source of band dissent, and the comedic value of mochi, both as an actual food and when, as a complement to the group’s “Little Mochi,” Corden becomes “Papa Mochi.”

For members of the BTS Army, the segment wasn’t nearly long enough. As one fan tweeted, “Corden recorded four hours of BTS Carpool Karaoke content and condensed it down to 16 minutes. Now release the other 3 hours 44 mins content sir while I’m asking nicely.”