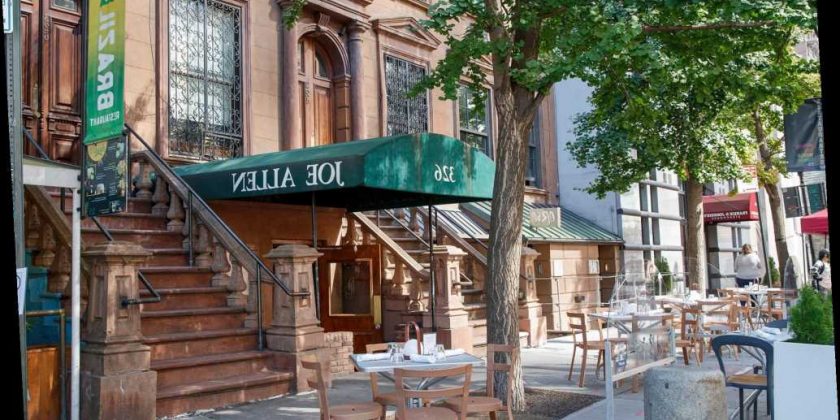 The question “Where should we go eat after the show?” has had the same answer for 55 years: Joe Allen.

The classy Theater District mainstay has been serving Broadway burgers and beers since the day it opened. However, for the past seven months, there’s been no Broadway shows and no Joe’s.

Stages, sadly, will remain dark until at least June 2021, but on Thursday the West 46th Street restaurant will flip its lights back on, and its notorious wall of flops, honoring the Broadway productions that never made a buck, will be gawked at once again.

“Joe Allen has to survive,” actor Nathan Lane, who likes to nosh on Joe’s comfort food between shows on matinee days, told The Post. “It’s too important a landmark.”

Never a place to make a big fuss — the wood-paneled joint has a tucked-away exterior, with only a subdued green awning to announce itself — the reopening won’t have confetti cannons or a Champagne toast. Nonetheless, regulars, many of whom are in the theater community, have been excitedly booking tables for weeks, ready to return to the restaurant that’s fed everybody from Ethel Merman to Andrew Rannells.

Opened in 1965 by its eponym, a debonair gentleman who still keeps an apartment above his eatery, the hot spot’s earliest years were during Broadway’s Golden Age, when new musicals such as “Fiddler on the Roof,” “Hello, Dolly!” and “Cabaret” starring Joel Grey were packing in crowds a few blocks away.

Did Grey, when he was through wiping off his iconic white Emcee makeup and singing “Willkommen,” spend the occasional night at Joe Allen?

“How about most nights!” the Tony and Oscar winner, 88, told The Post of his late-60s “Cabaret” days. “They had a jukebox with all the hits of all the theater cast albums. And when you were finished with the show, you were still up, still ready to have a beer and talk to your friends. The experience of being onstage for a couple hours was very high, and [afterward] you’d see everybody you loved.”

The staff’s hope is that love will keep them afloat, while musicals and plays can’t.

“Everybody wants to come for the first night,” general manager Mary Hattman said of Joe’s many devoted regulars. “But we don’t know what that’s going to turn into. Will people be back the following week?”

While Allen, 87, has been living out of state during the pandemic, Hattman has been the reopening ringmaster, and has spent weeks updating the restaurant’s air-filtration systems, reducing the indoor capacity to 25 percent and revising the cleaning regimen. For now, Joe Allen will be open for indoor and outdoor dining, with a few design updates courtesy of architect David Rockwell, plus takeout and delivery. Their Italian restaurant Orso next door will remain closed for the time being, as will the see-and-be-seen Bar Centrale upstairs.

“We can’t try to open too much, because we can’t bring enough people back,” Hattman said, adding that of the three restaurants’ 100-strong staff, only 18 are resuming work for now. The hard-fought effort is appreciated by decades of devotees.

Marsha Mason, the “Goodbye Girl” Oscar nominee and Broadway star, moved to New York in 1964 and began going to Joe’s as soon as it opened. “My first show, which was ‘Cactus Flower,’ was literally around the corner,” the actress, 78, told The Post. “It was fun when the English actors would come, because for some reason the English really understand socializing. And we used to have the best time practically closing down the place.”

Chita Rivera, the legendary star of “West Side Story” and “Chicago,” came to Joe Allen in the ’60s for the food, and kept coming back for the dude.

“I was mad about [Joe] and how he treated everybody in the business,” Rivera told The Post of her former flame. The dancer would arrive after her evening shows, bag of clothes in tow, and fell for the restaurateur’s intelligence, quiet demeanor and his Labrador retriever Alice, who would wag her tail all over the bar. As burgers sizzled, a romance bloomed.

“I went out with Joe for a little bit during ‘Chicago’, and nobody knew that he was a warm, funny guy that really cared,” Rivera, 87, said. “I just want people to know that he is that guy. He is Joe’s, he is Orso.”

Rivera, who currently lives outside the city, has just one request for customers returning to Joe Allen this week:

“Have a martini for me!”