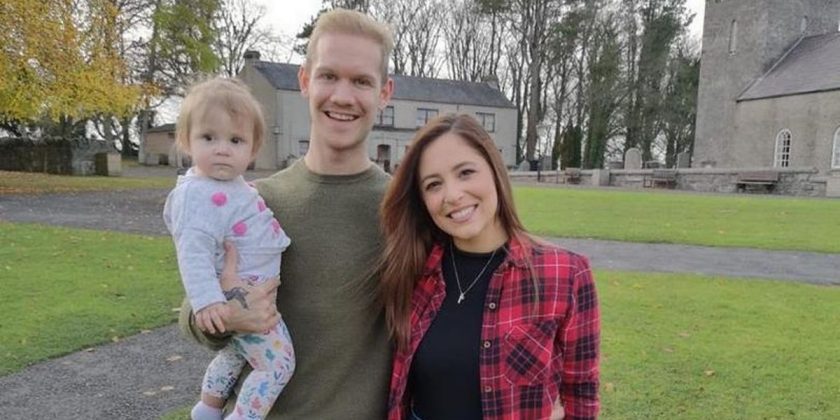 A young family claim they will be torn apart after the UK government ruled that a mum has no right to stay in the country.

Christina Campbell, 25, has been told that she must leave her home in Northern Ireland in the New Year.

The pair have a young daughter, Olivia Rose, who was born in the US – but the couple say they will not allow her to be separated from her mum.

Repeated problems with government paperwork means that the three will be separated indefinitely, Belfast Live reported .

New mum Christina will be transported to and abandoned in Spain under current plans.

Husband Adam, 30, originally from, Co Derry, Northern Ireland has spoken out against the bureaucracy.

"She is from Miami and because we have been repeatedly refused our legal paperwork by various government offices the Border Force officials say they are going to remove Christina from our home in Northern Ireland and return her to Spain because that was Christina’s last point of exit from for entry into the UK.

“We were on a week’s holiday in Majorca, Olivia’s first holiday, and so they have decided she will be returned to Spain and left there.

“A flight has been booked for January 4 but I can tell everyone categorically now, Christina will not be on that flight.

“Our solicitors have advised the Border Control authorities that she will not be in the airport and she certainly won’t be on that flight. She will not be separated from our daughter or me.

“We are good and decent people. We have done everything the right way. We give to our community every day. Christina was a volunteer here in Northern Ireland when she came to Belfast in 2016 and she helped a company grow and thrive.

"And she had her own beauty business before coming to Northern Ireland.

“We’re married, we love and support each other but we are being hounded by the authorities over paperwork that we just cannot get sorted and now we have been threatened with having our family blown apart.

“I am currently living in East Belfast due to work and studies but as part of Christina’s so called ‘bail conditions’ – that’s what it’s called ‘bail’ – she must reside in Portstewart at my mother’s house.

"So already even here at home, we have obstacles to being together throughout our weeks which is putting a terrible strain on family life and stability.

“We spent six months in Miami and Olivia was delivered there. Before that I had been in full time work in the community since 2012 only to take the break to be with Olivia Rose and Christina for our daughter’s birth.

“The removal threat placed on my wife was subsequently put in place as our latest European Economic Area visa had been refused on the basis I hold British and Irish nationality, BUT under the Good Friday agreement and by birthright I am entitled to do so.

"We were also given no right to appeal. We feel very lost and devastated but we are together and fighting this so any support is welcome.”

Christina and Adam are now urging support from the community in Northern Ireland.

"We only went back to the States because of healthcare provisions for me and because Olivia’s delivery was a planned Caesarian section, we knew we’d be out there for a while.

“When we came back to Northern Ireland where we planned to live, at the time of the application Adam hadn’t been in employment in the UK for six months because he wasn’t in the country. So they rejected our application.

“We tried the EEA and because Adam has a dual nationality which is his birthright, we were rejected again."

Councillor Julie-Anne Corr-Johnston said: “Kerry and I have known Adam for several years. We watched him meet a woman who was as equally fun and lovely as he is, fall in love and eventually become both a father and a husband.

"We can’t quite believe that we’re going to watch this same family be ripped apart and separated by land and sea.

“They are both skilled, educated and well rounded individuals and so we figured as long as they did everything asked of them they would be grand.

“We can’t quite believe that it’s came to this, in particular that Border Force is quite literally airdropping Christina in Spain simply because it was her last point of entry in to the UK. What do they expect her to do? Sleep on the airport floor?

“We’ve called everyone we know and asked for help. Press, politicians and people of influence. I only hope someone can.”