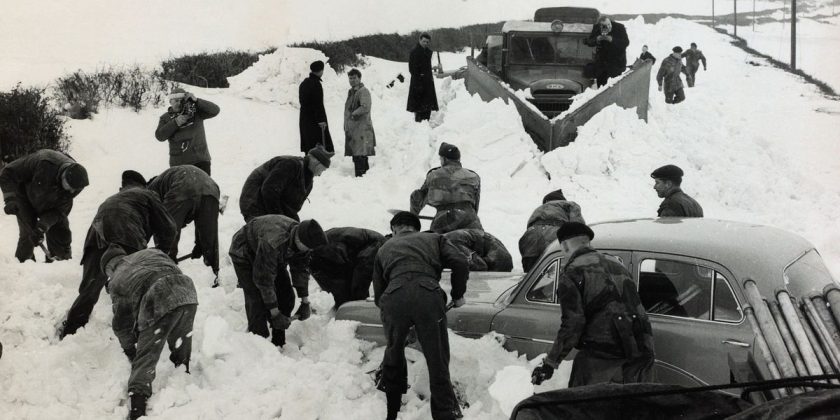 Britain is battling snow and freezing conditions which have brought chaos to roads, rail and buses.

Even a Wales’ Six Nations tie is under threat after the plane the squad were due to travel on was cancelled because of the weather.

Southern England and Wales have been hit by heavy snowfall as many schools are closed during the big freeze.

Temperatures in Braemar, Aberdeenshire, plunged to minus 14.5C (5.9F) on Thursday evening, which is the lowest temperature recorded anywhere in the UK since 2012, according to the Met Office .

The snowfall already exceeds the maximum 10cm of snowfall that was predicted when the forecaster issued a severe weather warning for Thursday.

But this is nothing compared to what people went through in 1963 during Britain’s coldest winter since records began.

Snow started falling on Boxing Day 1962 and the UK didn’t start to warm up until March.

Huge snowdrifts of up to 20 feet deep were seen across the country and it was so cold even the sea froze over.

In some places temperatures dropped to minus 22C and massive ice boulders formed on the nation’s beaches.

Even the Thames froze over and the winter had such an impact on the nation it has featured in an episode of Call The Midwife.

School closures were common and as the big freeze dragged on, telephone lines were brought down and thousands of homes were hit by power cuts.

Virtually all of England and Wales were coated in a thick blanket of snow.

While a huge number of sports matches had to be called off because the pitches lay below feet of snow, people found new hobbies.

The first ever car rally was held on the Thames and instead of water skiing, people were towed across the ice behind a motor.

Met Office spokesman Grahame Madge reveals the average temperature across the UK for the whole of the winter was a bone chilling minus 1.8C.

The big freeze was caused by an anticyclone, which hovere over Scandinavia and pulled the cold air from the arctic and Russia to Britain.

An area of high pressure near Iceland meant the milder and wetter air from the Atlantic was blocked from reaching Britain and the snow could never thaw.

And still the snow kept coming.

Finally the thaw set on on March 6 when people woke up for the first time in months to no snow anywhere.

And while the current weather looks set to cause chaos for the rest of the day and into the weekend, an Atlantic jet stream will be bringing wet, windy and warmer weather next week.

And experts say that wnter weather patterns are changing as the UK gets warmer.

Grahame explained: "The climate records tell us that winter is changing.

"For example in the decade from 2008 to 2017, the UK had five per cent fewer days where temperatures dipped below freezing and motorists had to scrape their car windscreens nine per cent fewer times because of a corresponding drop in the number of ground frosts when compared with the period from 1961-1990.

But that doesn’t mean the winter of 1963 – or last year’s Beast from the East – won’t even happen again.