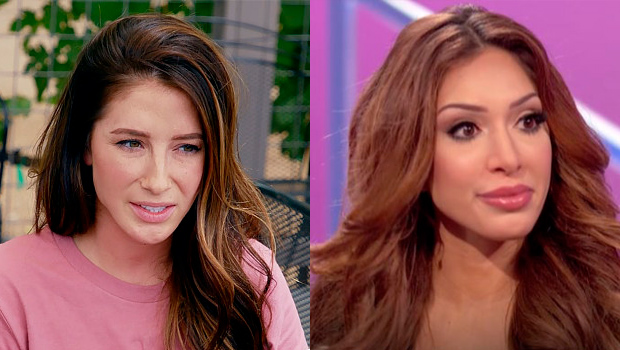 Farrah Abraham was the topic of conversation when the ‘Teen Mom OG’ stars met the show’s new faces. And Bristol Palin shared her not-so fond memories of the controversial mom.

Bristol Palin, 28, doesn’t think Farrah Abraham is very nice. She doesn’t think it now and she didn’t think it nearly a decade ago when they first met. The mom-of-three made her revelation in a sneak peek of the Nov. 12 episode of Teen Mom OG, during which she met the old school stars of the series – Amber Portwood, 28, Maci Bookout, 27, and Catelynn Lowell, 26 – along with fellow new girl Cheyenne Floyd, 25.

In the clip it quickly became clear that Maci and Bristol had met before, about nine years ago. “We were working some teen pregnancy panel,” Bristol said in a clip obtained by PEOPLE. Maci then added, “A long time ago when Farrah was somewhat nice.” Bristol agreed, giving her honest opinion about the 27-year-old mom-of-one who left the show in 2017. “She was so rude back then…” the Alaska-native said. “And you watch the show and you know… I always see it ‘cause – I know that people talk about me in such negative ways – so I like give everyone the benefit of the doubt. So I watch the show with like, ‘I feel bad for her. That must suck to feel like people hate you.’ But I feel she really does just choose to have enemies all over.”

Obviously, Amber and the other Teen Moms – who have a long history of logging heads with Farrah – didn’t rush to the former 16 and Pregnant star’s defense. “She feels like it’s just her way of shining through, I think,” Amber said. “She used to separate herself from us every time we did anything…” Clearly emphasizing that she’s not going to miss Farrah, she added, “I just want to be like cordial and friendly and just have a good fricking season without a crazy reunion.”

As for Bristol, this is not the first time that she’s dissed Farrah. Following the former Teen Mom OG star’s claim that Bristol was trying to copy her, Sarah Palin’s daughter clapped back. “[After] it was announced that I was on the show, it’s just like, ‘Oh, she’s trying to be me,’” she said on The Jenny McCarthy Show in September. “It’s like, girlfriend, you could not pay me to want to be anything like you.”