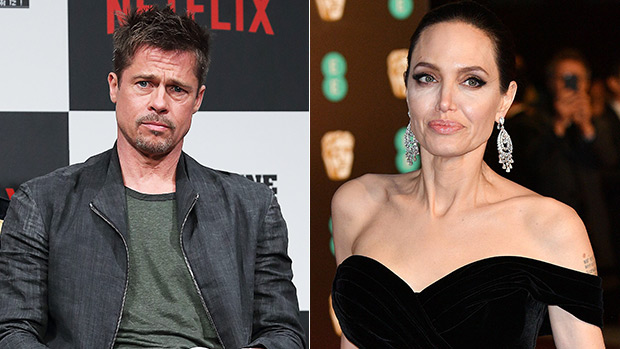 After two years of fighting over custody of their six kids, Brad Pitt is beyond frustrated that so little progress has been made with estranged wife Angelina Jolie. We’ve got details on how feels she’s being unreasonable by wanting full custody.

If it seems like Brad Pitt and Angelina Jolie’s custody war over their six kids has been going on a REALLY long time, it’s because it has. The pair split in Sept. of 2016 with Angie, 43, filing for divorce and initially getting primary custody of their brood as the former couple battles it out before a private judge. All of this time later it looks like things might be finally moving forward with a custody trial scheduled for Dec. 4, 2018. “It is breaking Brad’s heart that Angelina is dragging on this custody battle and that things seem to be far from over. He wants nothing more than for his divorce war with Angelina to come to an amicable end as soon as possible so that the kids and the family can begin healing,” a source close to the 54-year-old actor tells HollywoodLife.com EXCLUSIVELY.

“Brad desperately wants fair custody of his kids so that they all can have a healthier relationship. Brad is upset and annoyed that Angelina continues to fight him on this issue. Brad would love nothing more than to come to terms with Angelina out of court, but he feels he has tried and tried and she is constantly being unreasonable. Angelina can’t agree with Brad on almost anything, which really hurts him and he wishes things were different,” our insider continues.

The judge handling the couple’s private divorce admonished Angie in June for not letting five of their six kids — Pax, 14, Zahara, 13, Shiloh, 12 and twins Vivienne and Knox, 10 — have enough time with their father. 17-year-old son Maddox has been determined to be old enough to make his own decisions on what kind of relationship he wants with Brad. Their judge ruled on June 12 that “not having a relationship with their father is harmful to them,” adding that “it is critical that each of them have a healthy and strong relationship with their father and mother.” He added that Angelina was risking her primary custody status if she didn’t comply with giving Brad more time with their kids.

TMZ reported on Nov. 5 that paperwork has been filed for the former couple to go to court and battle over custody of their children in a trial scheduled for Dec. 4. Angie has refused to budge on wanting full physical custody while Brad hopes to share the children in a 50-50 joint custody situation.

“Angelina feels strongly that she deserves full custody of the kids. She absolutely wants them to have a relationship with Brad and she will encourage them to spend time with him. But she believes ultimately the best thing for the kids is that they live primarily with her. She does not want them shuttled back and forth between her and Brad. The idea of them living that sort of fractured life is a knife in her heart,” a second source tells us EXCLUSIVELY. “Angelina is very committed to winning this and will fight as long as she has to, until she wins. It’s not about dragging anything out, this is about getting to an agreement that she feels is best for her children.”