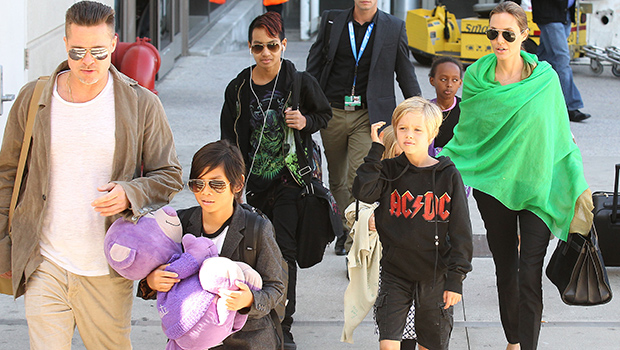 Brad Pitt doesn’t feel Angelina Jolie is treating their kids right during their custody battle and he feels the spotlight she’s putting on them is a way to get the public to side with her.

Brad Pitt, 54, is not happy about the way Angelina Jolie, 43, is handling their custody battle with their children and he feels she’s putting them in the public too much during their messy divorce. “Brad continues to be disappointed and disapproving of Angelina’s actions with their children during their custody war,” a source close to Brad EXCLUSIVELY told HollywoodLife. “Brad feels like Angie manipulates the kids, trots them out in public to make it look like she is an amazing mother in an attempt to win the divorce war in the court of public opinion, which is upsetting to Brad. While Brad continues to nurture his relationship with the kids privately, behind closed doors, he is bothered every time Angelina puts the kids on display in public, something Brad is working hard to avoid while the divorce war rages on. He thinks the kids’ privacy is most important during this time and it makes him sad that Angelina does not protect the children the same way.”

Brad and Angelina’s custody battle has been going on for two years and they have an upcoming custody trial that will take place on Dec. 4 unless they agree on a settlement. Since Angelina reportedly wants full custody of their kids, Pax, 14, Zahara, 13, Shiloh, 12 and twins Vivienne and Knox, 10, and Brad wants joint custody, things are bound to get even messier fairly quickly. California family law attorney David T. Pisarra recently EXCLUSIVELY told us that although Angelina is doing all she can to get full custody, there’s about a “one percent” chance that that will happen since Brad is a stable person and isn’t violent with their kids. Their oldest son Maddox, 17, is not a part of the custody battle since he’s old enough to make his own decision about what he wants his relationship with Brad to be.

Despite the tough situation currently going on, a source EXCLUSIVELY told us that Angelina wants to make sure all the kids have both parents around for the upcoming Thanksgiving holiday. “Angelina wants to surprise the kids and have their father over for Thanksgiving dinner,” a source close to the actress said. “Angelina knows the kids would love Brad to be there for the special day. She would love to recreate that bonding time for her kids.”

We definitely hope this is true. There’s no time like the holidays to put aside differences and bring out love!