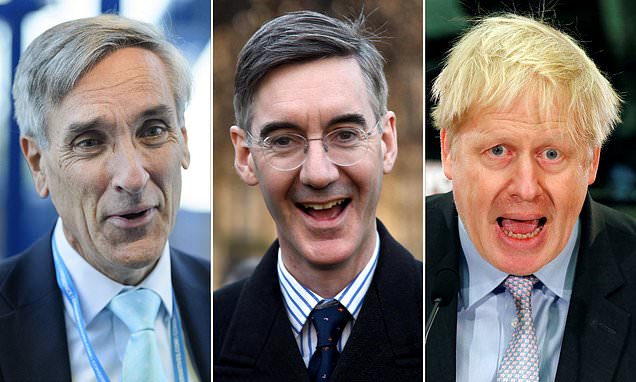 IAIN DALE: The Bollinger swillers of Redwood, Johnson and Rees-Mogg are turning into the real Brexit wreckers

Of all the many colourful scenes and events surrounding the tumultuous defeat of the Prime Minister’s Brexit deal last Tuesday, one image stays with me more than any other – and for all the wrong reasons.

It is the mental picture of senior hard-Brexiteers including John Redwood, Boris Johnson and Jacob Rees-Mogg triumphantly swilling glasses of Bollinger champagne as they celebrate the part they played in destroying the compromise agreement with the EU that Theresa May had so painfully negotiated.

Not only did Redwood, Johnson, Rees-Mogg and other like-minded MPs play a major role in inflicting the biggest parliamentary defeat on their own Government in modern times, they have done huge damage to the prospect of getting any meaningful Brexit at all. 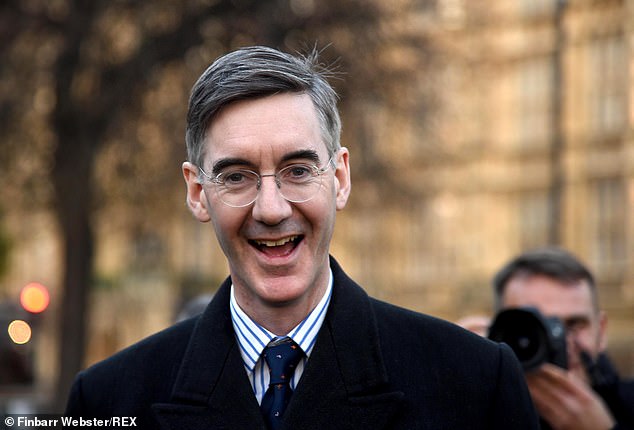 So to host an ostentatious celebration party, as Rees-Mogg did that evening, will feel like a slap in the face to millions of ordinary people, who will be asking themselves what these MPs were playing at.

Most voters cannot afford champagne, let alone agreeable £5 million homes round the corner from the Palace of Westminster, like Mr Rees-Mogg. They badly need a change in fortune for this nation and believe passionately that leaving the EU is the right way forward. I am no great fan of Mrs May’s deal. In fact, I hate the many compromises it makes. But I’m also not a fan of shooting myself in the foot.

Had the Prime Minister’s deal passed, we would be guaranteed to be leaving the EU on March 29 – a decisive step in the history of this nation.

Yet now it has been blown apart. And it is the likes of Johnson, Redwood, Rees-Mogg and other MPs in the European Research Group who are at least partly to blame. They are in danger of becoming the true wrecking crew of Brexit because of their refusal to compromise.

And with Mrs May’s proposals defeated so comprehensively, I see little alternative to extending Article 50 – the mechanism for leaving – beyond March 29 and remaining in the EU for some time to come.

Working class voters will surely be outraged at this continuing Brexit betrayal. When 17.4 million people decided they wanted to leave the EU, it was – at least in part– a howl of rage against the ‘Establishment’ and those they see as champagne-swilling elites.

Many callers to my LBC radio show last week said if the Government doesn’t deliver on the referendum result, they will not only refuse to support the Conservatives, they will never bother to vote again, such is the disillusion. Even a substantial proportion of Remain voters acknowledge that if democracy is to mean anything, we must leave. 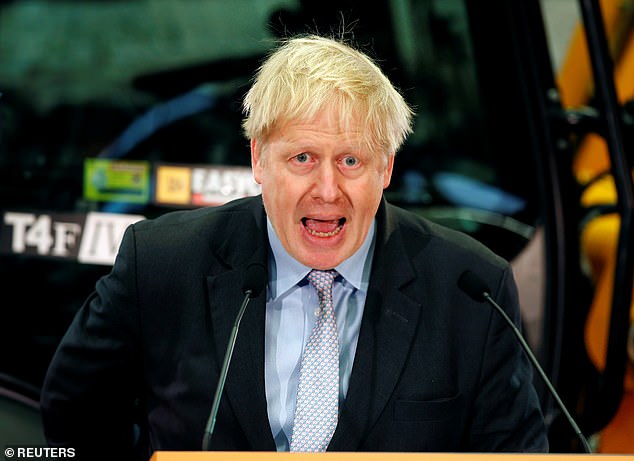 Deal or no deal: Former Foreign Secretary Boris Johnson is claimed to have put the chance of a meaningful Brexit in jeopardy by being one of the MPs who inflicted the biggest Commons defeat on their own Government in modern times

So what are we to make of Boris Johnson’s dramatic insinuation that there is an ‘Establishment conspiracy to thwart Brexit’ and that a nefarious ‘dark state’ is up to mischief? It is preposterous, in my view, the more so given Mr Johnson’s own role in destroying the only viable way forward. His behaviour could be described as self-indulgent at the very least. He failed to shine as Foreign Secretary, and since his badly calculated resignation in July, he has resembled an injured buffalo licking its wounds, wallowing in self-pity.

He writes weekly newspaper columns railing against the Government’s Brexit policy, yet seems unable to articulate a coherent alternative beyond hackneyed soundbites and wishful thinking.

Yes, he can find the collective G-spot of Conservative Party activists, but in his six months out of office he has wasted his time. He should have formulated a real post- Brexit vision and how to achieve it. Instead, all we see are headlines about his post-marital love life.

When Mrs May is eventually replaced – and that surely can’t be too far away – Britain will need a serious politician to lead us through some very serious times. Boris Johnson has so far failed to show us he can be that man.

Over the past two days, the Prime Minister has been meeting other parties and senior MPs, trying to find a way through the log-jam. But she apparently says little that isn’t contained in the briefing paper in front of her. The mantras are all-too familiar. 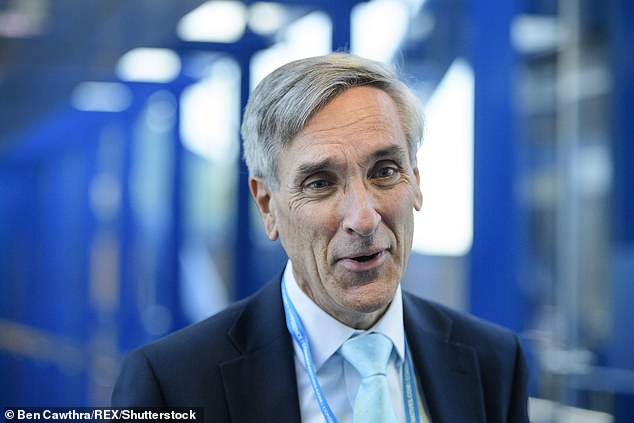 Her advisers and her de facto deputy, David Lidington, are the ones who actually engage with those ranged on the other side of the table. Although still desperate to deliver the Brexit that people voted for, I’m sorry to say that Mrs May seems incapable of any original thought and still has a bunker mentality. She has that in common with Jeremy Corbyn. Both are in danger of being sidelined by people who believe replacing them is the only way to guide their parties through the rapids of Brexit.

There is just one faint chink of light for the Prime Minister.

I understand the Democratic Unionists, her Northern Irish allies who have been blocking the deal, have drawn up plans to send her back to Brussels with the support of Parliament in the hope of putting a time limit on the hated Irish ‘backstop’ (which could see us tied to Europe indefinitely).

Would Brussels bend? If so, it could completely change the dynamic in the House and help free the Westminster blockage. It’s worth a try.

Mr Rees-Mogg’s conciliatory article in today’s Mail on Sunday at least raises the hope he will bring the Brexiteers closer to No 10.

Something, somewhere will certainly have to give if the country is to avoid leaving the EU on March 29 without a deal. That is why an extension of Article 50 is becoming ever more likely, as is a Norway-style arrangement in which Britain leaves the EU but remains in the single market, and perhaps also a form of a customs union. 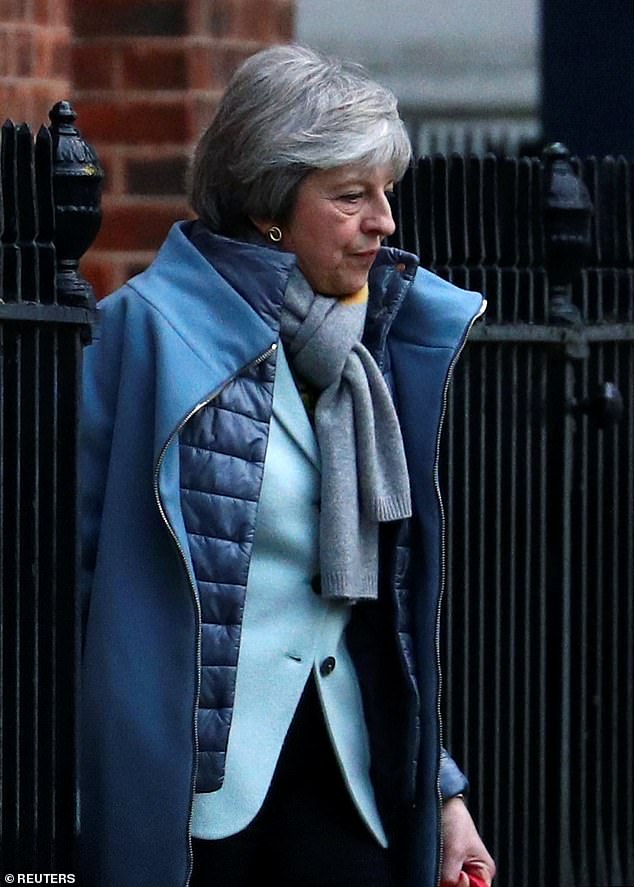 Fighting on: Prime Minister Theresa May is battling to keep her Brexit plan alive

Like most of those who voted to leave all aspects of the EU, I would regard any such arrangement as a gross betrayal by a Prime Minister and a Government who have handled the Brexit negotiations with all the skill of Eddie the Eagle careering down a ski jump.

But there’s little point obsessing about past mistakes. We are 68 days from leaving the EU. Let’s hope someone, somehow, takes back control and shows real leadership.

Tuesday night’s Bollinger party at Jacob Rees-Mogg’s home was a real Animal Farm moment – when the pigs who staged the revolution against their human overlords in the George Orwell novel finally start behaving like the human beings themselves. Famously, they are indistinguishable.

Johnson, Redwood and Rees-Mogg are supposed to be the strongest cheerleaders for Brexit, but now they are prime suspects in the case of Ordinary People v The Elite. They are in danger of betraying the cause they promised to support.

For two years they have affected to represent the interests of ordinary men and women in their fight with the Establishment. But it looked very different on Tuesday night.