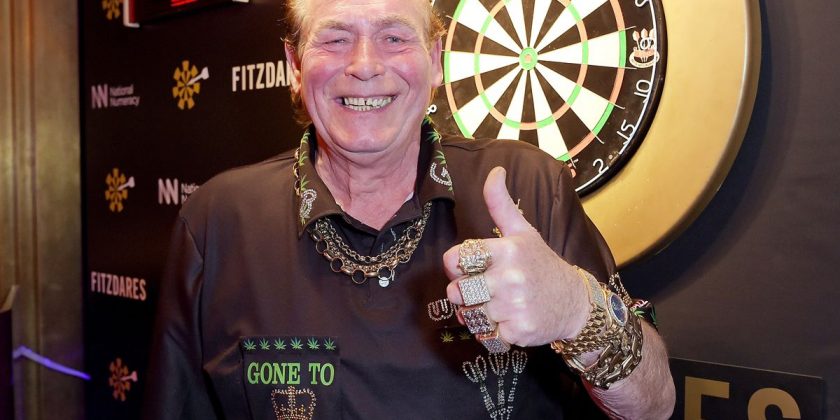 Bling king Bobby, 72, fears political correctness went a step too far when models who accompany players to the stage were axed on the grounds of taste.

Bobby, whose wife Marie, 60, was a walk-on girl at Professional Darts Corporation tournaments, said: “It’s ridiculous. My missus was the first walk-on girl. She never felt victimised. She would hold the cup up and I’d do the music. Razzmatazz!

“I thought it needed it and the walk-on girls are getting a living out of it, so good luck to them. You have women in magazines with clothes and swimsuits. It’s a nice thing, why not look at it? We look at a nice flower, isn’t it beautiful? This is the same thing.” Bobby spoke to the Sunday Mirror at the Fitzdares Darts at the Arts charity tournament in London in aid of National Numeracy.

Bobby, who played against World No1 Michael van Gerwen, added: “I started the walk-ons and the dressing up.

“I thought the game needed the fun. It’s people that make it a game – people.

“Well rules are made to be broken. It doesn’t mean anything for me, I make my own rules up.

“Years ago, you could say things. It wasn’t racist and it was with humour and fun. Now you can’t say nothing.

“It’s like pantomime, but that’s what pantomime is about. It’s fun and even the kids could get the jokes.”

The BBC no longer uses the girls for the Champions League of Darts. And Professional Darts Corporation chiefs axed them at TV events this year for being unsuitable for a family audience.

The PDC said: “We regularly review all aspects of our events and this has been made following feedback from our host broadcasters.”

MP: Get posh fans onboard

A veteran Tory MP reckons darts could become the next posh sport – and getting fans to wear hats could help!

Sir Bill Cash (below), 78, who was at the Fitzdares Darts at the Arts charity tournament, said: “The whole point about this evening is to make darts socially a bit like the Henley Regatta and the Cheltenham Gold Cup. Darts is the next posh sport.

“We have really posh people here.”