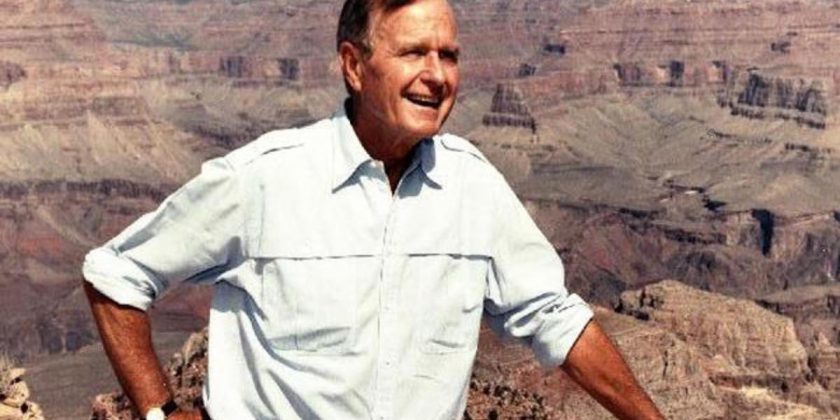 From World War II hero to Texas Congressman, U.N. Ambassador, CIA director, vice president and president, George H.W. Bush has left a lasting legacy on this country. But when asked about that six years ago, he said he banned the “L” word, adding, “I think history will point out the things I did wrong, and perhaps some of the things I did right.”

CBS News veteran Bob Schieffer, who covered the former president’s runs for the White House in 1980 and 1988, described for “CBS This Morning: Saturday” his first interview with Mr. Bush, who died Friday at age 94.

When asked about Mr. Bush being possibly the most qualified man to have become president given his resume, Schieffer said, “Who knows what qualifies someone to be president? But he had all of this experience. And in the end, I think what we’ll remember him for is, number one, the invasion of Iraq when Saddam Hussein had invaded Kuwait, he drove him out, American forces did. And he got other countries in that region to pay for it, which was a remarkable thing.

“But I think even more important than that, in history, he was the one who was in office when the Soviet Union came apart, when it collapsed. And I think the way he guided American reaction to that, he would not allow bragging and talking about how, you know, we’re superior to them and all that. He just kind of played it cool. And I think the tone that he took, other countries – our allies and friends – took the very same tone. And I think it probably got us through a very difficult time that, who knows what might have happened if some desperate person in the Soviet Union, they had all these nuclear weapons, had decided to try to overturn this? So, I think he gets great credit for that.”

A look at the life of the 41st President of the United States, Ambassador, Congressman, World War II veteran, and patriarch of a political dynast…

Following the Gulf War, in 1991, President Bush’s approval rating was nearly 90%. And yet, the following year he lost his re-election bid to Bill Clinton. In his concession speech he allowed that he would continue to find ways to serve, while also getting active in “the grandchild business.”

When asked how hard that defeat was for him, Schieffer said, “It was very difficult because, what it was, he had to break a campaign promise. He had gone through that campaign with the mantra ‘Read my lips: no new taxes.’ And then the country got into an economic bind and he had to do just that. His popularity went down sharply and he lost the election.”

Despite having built an incredible resume as an entrepreneur, politician and diplomat, Mr. Bush was sometimes hampered by his geniality, said Schieffer.

“He was so nice, he was so proper, that some people mistook that for weakness,” he said. “And Newsweek, in the ’88 campaign, actually ran a cover with his picture on the front that said ‘The Wimp Factor.’ He was anything but a wimp.

“And yet his people said, ‘We’ve got to change this image.’ That year he’d lost in Iowa, [so] they redid the campaign. They went to New Hampshire, and the way they decided to make him be more ‘manly,’ as it were, is he abandoned the coat and tie, started wearing trucker tractor hats and wind breakers and things like that, and [he] drove every piece of heavy machinery that he could find in New Hampshire. I mean, at one point somebody said to me, ‘Hide the forklift, mama, George Bush is coming!’ He would drive tractors, he would drive snowplows, once he drove this 18-wheeler truck. He only drove it around the parking lot and the Secret Service was hanging off the side, but he was driving around out there tooting the horn, honk, honk it would go. And the thing is, American politics being what it is, he won! He beat Bob Dole and went on to get the nomination.

“But he was truly one of the kindest people that I ever knew. He probably had more friends than any president I ever knew. And you know, he didn’t write his own biography. He was so shy about being in public life, but he never lost the opportunity to write people to thank them. And there must be a million of them out there somewhere. He was really a nice man.”