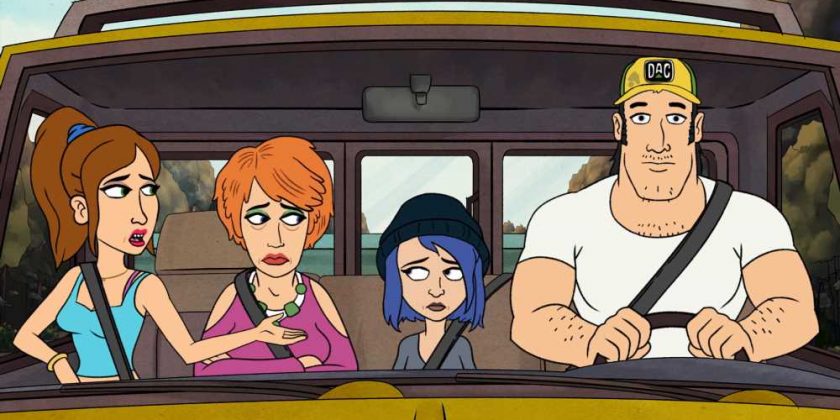 Fox’s new animated series, “Bless the Harts,” won’t pose much of a challenge to mainstays “The Simpsons” and “Family Guy” — but it’s a pleasant-enough diversion for a Sunday night.

This tale about an economically challenged blue-collar family, living somewhere in the deep South, boasts the vocal talents of A-listers Kristen Wiig, Maya Rudolph, Jillian Bell, Ike Barinholtz and Kumail Nanjiani. While only intermittently humorous, its good-natured approach — it’s not snarky a la “Family Guy” — are enough to get “Bless the Harts” over the hump.

The series follows single mom Jenny Hart (Wiig) who lives with her mother, Betty (Rudolph) and her teenage daughter, Violet (Bell), a fledgling cartoonist given to her age group’s sullenness and sarcasm. Wayne Edwards (Barinholtz) is Jenny’s boyfriend, who longs to be more of a father figure to Violet. His main goal in life is to win Violet’s approval, since her biological father, Dan Reynolds, is alive and well and living high off the hog as a wealthy town elder.

The humor here is gentle; Betty owns a dot matrix printer, calls her daughter “Nosy O’Donnell” and has filled a storage-facility room to the brim with highly flammable ’90s-era “Hug ‘N Bug” dolls (including the Jose Canseco Y2K and Colin Powell Macarena models), which she’s hoping to sell online for big bucks to help pull the family out of their financial bind.

Jenny, who has “a bejeweled calculator, obviously,” works as a waitress at the Last Supper restaurant and chews the fat there with Jesus (Nanjiani), who materializes every now and then to listen to Jenny’s problems and to dispense his own brand of wisdom.

It’s harmless, inoffensive stuff that has a retro kind of “King of the Hill” feel and should appeal to those seeking a kinler, gentler animated series. “Bless the Harts” has the added advantage of its “Simpsons” lead-in at 8 p.m., at least regarding early sampling, so that should help its cause — as will its creative pedigree, including creator/executive producer Emily Spivey (“The Last Man on Earth,” “Parks and Recreation”) and several heavy-hitting guest voices including Holly Hunter and Mary Steenburgen.