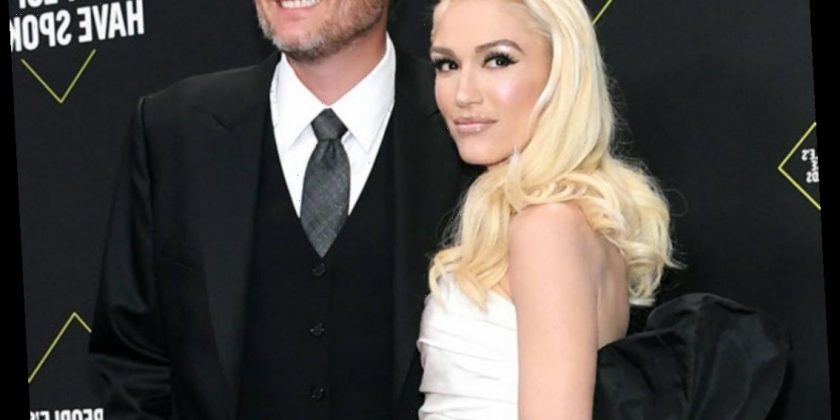 Celebrate Blake Shelton and Gwen Stefani's engagement by looking back on their sweetest quotes about one another over the past five years.

There's no doubt about it: Blake Shelton and Gwen Stefani are crazy about each other.

In case you missed the big news, The Voice coaches confirmed through Instagram on Oct. 27 that they are engaged and taking the next step in their relationship.

"Hey @gwenstefani thanks for saving my 2020… And the rest of my life," Blake shared online. "I love you. I heard a YES!" Gwen added, "@blakeshelton yes please!."

The private proposal comes after the musicians started dating all the way back in November 2015. Since then, the pair has been able to work together on The Voice and collaborate on huge hits like "Happy Anywhere" and "Go Ahead and Break My Heart." And yes, they've also been able to gush about each other both on social media and in special interviews.

One unforgettable moment was when Blake recalled falling head over heels in love with the former lead singer of No Doubt.

"I looked over at Gwen—who I didn't really know—and she had these huge tears in her eyes," he recalled to Billboard in July 2016. "I thought it was going to be another one of those 'things are going to be OK' talks. She said, 'I'm going through something very similar to what you're going through. I understand. And I hate it."

Both Blake and Gwen experienced public divorces before their friendship turned into something more. Fast-forward to today and it's simply time to applaud the pair.

Keep scrolling to see the couple's cutest quotes about each other as E! News celebrates their engagement.

"I think he's hot, don't you? But to be super honest, it is kind of crazy we both went through the same thing at the same time. There's been so many people that I've gotten so much comfort from. Just people coming to me and telling me their story. Not confiding, but sharing, which has just helped me see things from a different perspective and move forward." —Gwen to Ryan Seacrest in November 2015

"When you have a broken heart—at least, when I do—you got to get it out of your system. You want people to sympathize with you. I was at rock bottom, in the middle of hell…Gwen saved my life. Who else on earth could understand going through a high-profile divorce from another musician?" —Blake to Billboard in July 2016

"I grew up in Orange County, so I don't know if you've been down there, but it's nothing like the middle of America and our nature was the beach. So to be able to be in Oklahoma and be able to experience a ranch kind of vibe is just something I never ever had, so it's just been really, it's been great, amazing." —Gwen on Jimmy Kimmel Live in August 2020

"You know, what? I love weddings. The kids love him. We love him. Everybody loves him. He is lovable! I think about it all the time." —Gwen to Ellen DeGeneres when discussing marrying Blake

"He doesn't even like to do a photo shoot. You can never convince him to do it. So he just called me like, ‘They want me to do this.' And I was like, ‘You should totally do it! You're so sexy!'" —Gwen's reaction to Blake being named People's Sexiest Man Alive

"[My style is] more feminine than ever before. It's probably because I'm super in love and have a really manly man. I enjoy letting that part of me come out now because when I was in No Doubt, I never thought of myself as sexy. Even in my 30s, I was a tomboy. I hardly ever carried a purse." —Gwen to InStyle in July 2018

"Setting here watching @gwenstefani rehearsals it continues to shock me the amount of GIANT hits this girl has written… I highly recommend y'all catch her Vegas show if you can get tickets!!!" —Blake on Twitter in June 2018

"He's so good at the show, I mean, he's just so magical. Blake is literally a unicorn. Like anywhere he goes, people are just attracted to him, and he's such an incredible talent." —Gwen on SiriusXM's Andy Cohen Live in September 2019