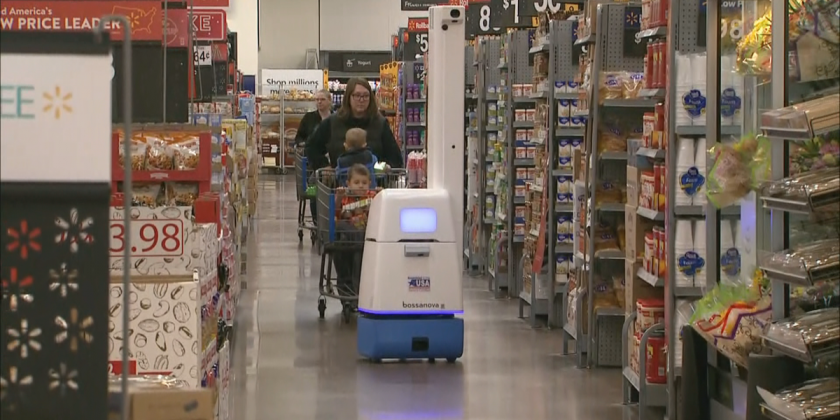 As the Black Friday shopping rush begins, major retailers are looking for new ways to use technology to compete with online competitors. Total retail sales in the five days around Thanksgiving, excluding cars and fuel, are expected to reach $144 billion, according to Adobe Inc. and Internet Retailer Research. Fifteen percent of those sales will be online.

A Walmart in Rogers, Arkansas, looks like the store you’ve been shopping at for years – almost. America’s largest retailer is hoping to stay on top by bringing a dose of online convenience to old-fashioned, off-line shopping, reports CBS News correspondent Tony Dokoupil.

This holiday season, every aisle can be the check-out aisle. And if you’re tired of getting lost in giant stores, Walmart says it has a solution. Type, say, Instant Pot, into your Walmart app and your phone will guide you to it.

If you’d rather not wait for your online order to come to you – you can come to it by using one of the pickup towers. Walmart’s Mark Ibbotson gave us a demo.

“It is as simple as scan the bar code… you can hear it clunking away in the background. Not sure it should be clunking. But there you go,” Ibbotson said. “Within seconds, there you go, there’s your purchase.”

Walmart isn’t the only retailer selling convenience these days. Thanks to curbside pickup, Nordstrom and Target customers don’t have to leave the car. Home Depot shoppers can skip the line by picking up their order from in-store lockers.

“Amazon revolutionized retail by making shopping so easy, so fast, so convenient,” said Charisse Jones, USA Today national business correspondent. “And I think traditional retailers are really having to roll out this technology and be very savvy on smartphones to kind of attract those shoppers that they’re losing to Amazon.”

Though stores are giving customers more options, the popularity of online shopping is growing. Last Thanksgiving weekend, people spent $19.6 billion online – up more than $2 billion from 2016.

But even so, Jones believes traditional retailers will always have one particular advantage when it comes to holiday shopping.

“Literally every year for the last 20 years, mothers and grandmothers and daughters… line up, they’ve got their hot coffee, it’s this ritual that a lot of people embrace as much as the turkey and the pumpkin pie,” Jones said.

For all the shoppers out there, we urge you not to splurge too much on a holiday dream item. According to Jones, about 25 percent of people are still paying off debt from last year.