In the first taste of Billie Eilish’s new album, the ‘Bad Guy’ singer calls out an older man for ‘ruining’ a young girl’s life, all while a python constricts around her.

The next era of Billie Eilish kicked off on Thursday (Apr. 29). Days after announcing her sophomore album, Happier Than Ever, would be out this summer – and giving fans a preview of the title track – Billie, 19, delivered the first track off of Happier, “Your Power.” Set against a scenic desert landscape, the accompanying video sees Billie sit alone… until a large reptile starts to coil around her. The lyrics have Billie, as an onlooker to something sinisher, accuse a man of manipulating an unsuspecting young woman. “She said you were a hero / you played the part / but you ruined her in a year / don’t act like it was hard / and you swear you didn’t know / no wonder why you didn’t ask / she was sleeping in your clothes / but now she’s got to get to class / how dare you.”

As the song continues, Billie shifts perspective. “I thought that I was special / you made me feel / like it was my fault you were the devil / lost your appeal.” With the snake firmly gripping her neck, Billie casts an accusatory glance at the camera. “Does it keep you in control / for you to keep her in a cage / and you sweat you didn’t know / you said you thought she was your age / how dare you.” Overall, it’s an incredibly mature piece of art from the young woman, showing that she continues to demonstrate her own power as a singer and a creative force.

Billie announced on Tuesday (Apr. 27) that Happier Than Ever, her highly-anticipated follow-up to WHEN WE FALL ASLEEP, WHERE DO WE GO?, will be out on July 30. “This is my favorite thing I’ve ever created and I am so excited and nervous and EAGER for you to hear it,” she wrote, while sharing the album’s cover art. Gone is Billie’s green and black hair, replaced by the blonde locks she debuted in mid-March. “I can’t even tell you. I’ve never felt so much love for a project than I do for this one. hope you feel what I feel,” wrote Billie, who punctuated this message with an appropriate, “AHHHHHHHHHHHHHHHHHHHHHH.”

Along with announcing the album, Billie shared the tracklisting for Happier. Along with the two announced songs (“Happier Than Ever,” “Your Power”) and the previously released “My Future” and “Therefore I Am,” the upcoming album will contain “Getting Older,” “I Didn’t Change My Number,” “Billie Bossa Nova,” “Oxytocin,” Goldwing, “Lost Cause,” “Halley’s Comet,” “Not My Responsibility,” “Overheated,” “Everybody Dies,” “NDA,” and “Male Fantasy.”

The album’s title track was first previewed in the documentary Billie Eilish: The World’s A Little Blurry, per CinemaBlend. Towards the end of the film, Billie and her brother/creative partner FINNEAS are picking out a song with lyrics, “when I’m away from you / I’m happier than ever / wish I could explain it better. Wish it wasn’t true.” Such content indicates that though Billie’s hair is no longer the slime-green it was on WHEN WE FALL ASLEEP, she hasn’t completely abandoned the dark and emotional themes woven throughout her debut. 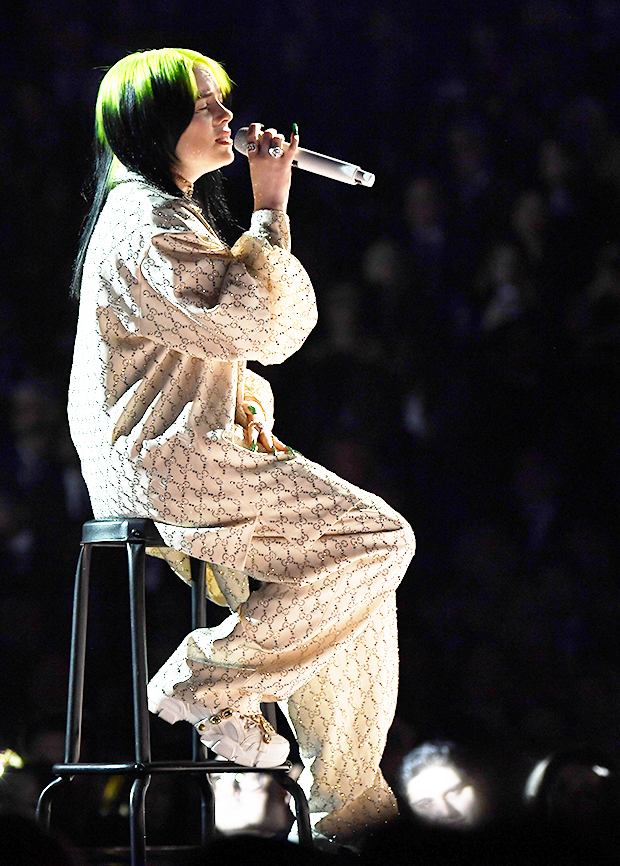 However, Happier will mark an evolution for Eilish, similar to how her new hairstyle signifies a new change. “Hair is the easiest way to feel like you’re evolving as a person,” Finneas said to reporters at the start of April. “Whenever you change your hair style or dye it a different color you feel like you’re growing up a bit.” Finneas acknowledged that fans were invested in Billie’s look because “the green roots were such a recognizable thing,” and that whenever there is a major change, “people get excited and fixated on it, but I think it’s deserving. It looks really great.”

Billie touched upon the subject of “happiness” in a 2019 interview with Elle. The “bad guy” singer has been open about her struggles with depression and self-harm, and the then-17-year-old Billie said she felt “like nothing mattered” when she was younger. “It hurt me to see that. I was a 16-year-old girl who was really unstable. I’m in the happiest place of my life, and I didn’t think that I would even make it to this age.”

“I haven’t been happy for years. I didn’t think I would be happy again. And here I am—I’ve gotten to a point where I’m finally okay,” she said to Elle. “It’s not because I’m famous. It’s not because I have a little more money. It’s so many different things: growing up, people coming into your life, certain people leaving your life. All I can say now is, ‘for anybody who isn’t doing well, it will get better. Have hope. I did this shit with fame riding on my shoulders. And I love fame! Being famous is great, but it was horrible for a year. Now I love what I do, and I’m me again. The good me. And I love the eyes on me.”