The Melbourne Fringe Festival Parade was an institution in the city for nearly 20 years, often attracting crowds of over 100,000 – more than the AFL Grand Final. This weekend it will return for the first time since 2001, as will the famous Waiter’s Race, with a host of wild and wacky floats and all sorts of crazy shenanigans.

The new incarnation of the parade will make its way down Lygon Street (rather than Brunswick Street in Fitzroy, as it used to) and will culminate in two massive block parties. 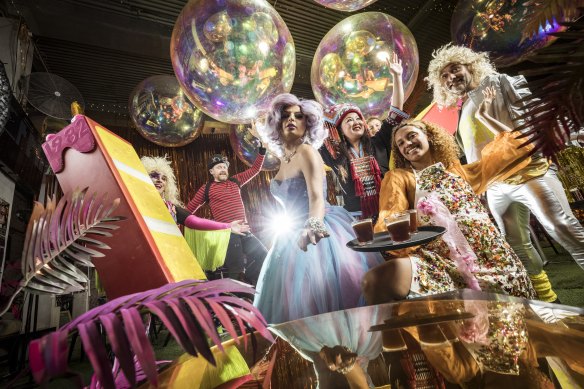 The event is designed to showcase and celebrate Melbourne’s artistic community, says Melbourne Fringe Festival artistic director Simon Abrahams. Staged at the halfway point of the festival, this year’s parade is a one-off – a special post-COVID event.

“I brought the parade back because it’s the iconic Fringe event,” Abrahams says. “It represented everything that the Fringe is: chaotic, irreverent, celebratory. It was of and by and for the people of this city.” 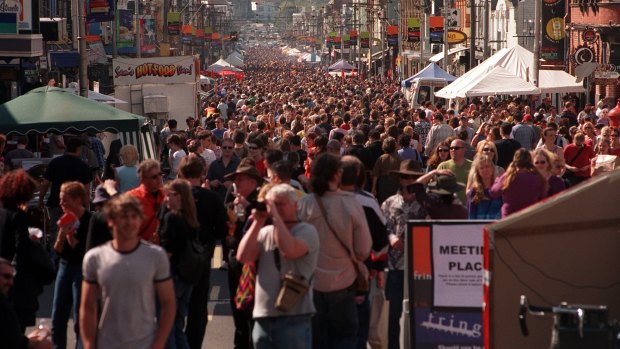 The Fringe Parade on Brunswick Street in 2001.Credit:James Boddington

“I’ve always felt that it was lost to Melbourne. It’s been a long-held dream of mine to bring it back, [and] now was the right time: it’s our 40th birthday, it’s a festival all about time, and also we haven’t had a festival in three years. This city needs people to come back!”

Abrahams says the parade has been framed as a march for the arts. “It’s like Mardi Gras in a sense, it’s not a protest, it’s a celebration. It’s about visibility; it’s about saying that, as a community, we are here and that creativity is central to our culture and that difference is beautiful and should be celebrated. Everyone is free to be whoever they want to be, nothing is too out there.”

“In the glory days, more people would come to the Fringe Parade than the Grand Final. It was held on the following day – it was an enormous event. It became so big, expensive and out of control that ultimately at the time it became about something else.

“I’m thrilled to bring it back to its roots of really celebrating artists and creating something that is family-friendly.”

While the parade kicks off at 3pm on Saturday, anyone interested in getting involved can turn up earlier to learn dance moves or find signs to hold. The famous Waiter’s Race, in which local baristas make a latte and then one of their waiters runs an obstacle course holding the coffee, trying not to spill it, is also at 2pm. Traditionally, staff from Brunswick Street’s Marios cafe often won. 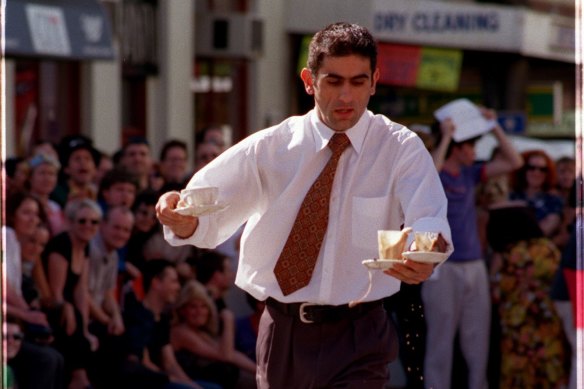 A Marios waiter spills a drop or two during the Waiters Race at Melbourne Fringe Street Parade and Party, 1998.Credit:Mario Borg

Abrahams makes the point that, like the artistic community, the hospitality industry has also had a tough time over the past few years. “It was about celebrating the businesses,” he says. “There was a perpetual trophy [too]. We don’t know where it is, someone out there has it. Probably Marios.”

For the parade itself, Amos Roach, son of the late Archie Roach, will lead a troupe of Indigenous dancers and musicians, as a tribute to his father. There will also be a celebration of Jack Charles. Expect to see Miss First Nations; large-scale puppetry by the Snuff Puppets and A Blanck Canvas; kinetic sculptures; a walking aqua aerobics group complete with a mobile pool; an ’80s dance group; unicyclists; ukelele bands; belly dancers and other community acts. Several unions will be involved too. Trades Hall is one of the festival hubs this year.

The parade will culminate in two big block parties: one at Argyle Street Square and another on the corner of Grattan and Lygon Streets. Both kick off at 4pm. Artists appearing include Betty Grumble, The Real Hot Bitches, Miss Cairo, Kutcha Edwards, Juniper Wilde and Cookin’ On 3 Burners. The block parties will finish at 10pm, but that won’t mark the end of the festivities.

“At the end of the night, we’re inviting people back to Trades Hall, and we’ll be dancing to the wee hours of the morning,” Abrahams says. “It is a chance to celebrate our collective creativity and to come together as a community and literally take to the streets – something we’ve not been able to do for three years.”