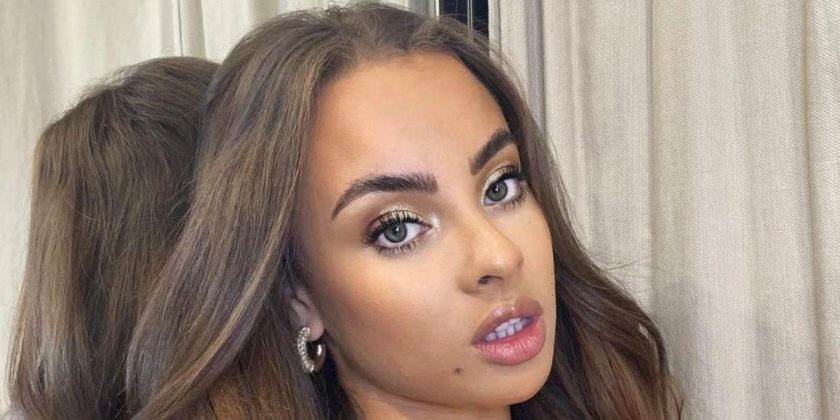 It’s only been a few days since Love Island 2022 finished and we’re already missing watching the housemates go about their daily villa lives. To ease our loss, we’re taking a look back down memory lane at some of the best beauty moments from series eight – and wow, were we treated to some transformations and trending product reveals.

From Danica’s now-viral gold eyeshadow, which fans hilariously say got more airtime than some of the contestants, to Laura Whitmore’s mid-season pink hair makeover, here are the top moments from this summer series that we won’t be forgetting about in a hurry….

Gemma Owen mostly chose to wear a deep neutral shade of lipstick for the evenings, prompting plenty of Twitter users to take to the platform to question whether or not the lipstick/lipliner combo is the same as Faye Winter’s – last year’s brown lipstick icon.

One fan tweeted: “Did Faye come and give Gemma her nude lipsticks?” while a second said: “Gemma’s lip look is giving me flashbacks to Faye’s brown lipstick debacle.”

“Gemma and her nude lipstick are Faye and the brown lipstick 2.0,” a third wrote.

We’ve since found out the answer is no. Gemma wore Sleek MakeUP Matte Me XXL Liquid Lipstick in Shabby Chic,£4.99 here, and 17 Lip Define Pencil Soft Liner in Rose Brown,£2 here. We’re already wondering who will be the brown lipstick queen for 2023!

Jetting back into Palma de Mallorca from the UK in preparation for the explosive post-Casa recoupling, Laura Whitmore was pictured with a gorgeous pastel pink hair colour. Considering she never strays from her signature beachy blonde lengths, the new look was quite the makeover for the Love Island presenter.

It was revealed shortly after her makeover that the exact product Laura used to give herself the temporary pink colour was Davines Alchemic Creative Conditioner in Pink,£26 here. For something more budget-friendly, we recommend trying Bleach London Rose Toner Kit, now£2 here.

Never have we warmed to a bombshell quicker than we did to Danica Taylor. Though she didn’t quite make it to the final, she left us with a lasting image of her in the form of her glitter-heavy eyeshadow – which fans say was given more airtime than some of the contestants!

For weeks the dancer wore the exact same glitzy gold look, prompting #LoveIsland Twitter to speculate on the palette she used nightly.

“Danica looks incredible. She deffo reads our tweets about the gold eyeshadow too,” said one, while a second tweeted: “Danica's gold eyeshadow has been on the show more than Deji for real.”

If you cast your mind back to the first few weeks of the series, you’ll likely remember Islander Afia Tonkmor’s brief stint in the villa. Though she only stayed for five days, she left a lasting impression: one she says wishes she’d have known she was making at the time.

In a now-viral TikTok video posted by the star after she arrived back home, Afia joked that the girls “did her dirty” by not telling her about a concealer faux-pas that left her with unblended under eyes.

“It was just your concealer, apart from that your makeup was fine!” one fan tried to cheer her up. Afia responded to the comment, saying: “That was a big part tho,” adding a laughing face emoji.

All we’ll say is that Kim Kardashian made an entire beauty empire out of her concealer-lightened under-eyes, so Afia might be onto big things too.

Last but not least is Indiyah Polack’s, quite frankly, amazing hair. Experts predicted before the show even began that Indiyah would set a big new two-tone hair trend thanks to her streaks of platinum blonde on the sides of her head – and those predictions proved true.

Not only are we all desperate to book in for an appointment to get bleach streaks, Indiyah’s high ponytail with 60s-like flicked ends is the top hairstyle trend of the moment. Snaps to Indiyah.