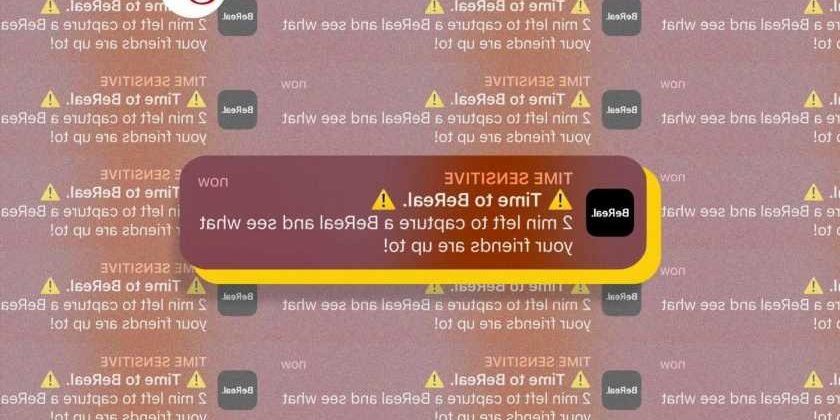 BeReal is social media’s self-titled “anti-Instagram” – a place not to flog product, get famous or build your brand, but share your most unfiltered self. But how much longer can it hold out before aesthetics and affiliates take the reins?

Back in 2005 a man named Jawed Karim uploaded the first ever video to a brand new platform called YouTube. It was an 18-second clip of Karim in front of the elephant enclosure at San Diego zoo, and if there’s one thing you’re bound to notice about the birth of the world’s biggest video-sharing site, it’s that ‘Me at the zoo’ is extremely boring (the quality is bad and his chat meandering at best). Fast forward 17 years and were Karim touring the zoo today it’d be a whole different story: a full production crew with one cameraman per elephant, a mood board for the petting zoo, a dedicated Photoshop budget for the capybaras, and a long list of #afflinks for the gift shop. Truly, we are not in Kansas any more.

This is not to say that only YouTube has changed from its heady candid days of yore. Facebook, Instagram and even TikTok (despite its infancy – it’s only been available worldwide since 2018) seem to have grown into places where real-life content takes uncharacteristically large amounts of work, from idea generation all the way through to professional-level editing and marketing. What used to be about getting an insight into people’s lives has become a look at the life they want you to see. In short, reality now demands stage direction. So imagine the horror of Zuckerberg et al when an app named BeReal began taking off in early 2022 designed around the very thing that traditional social media cannot seem to keep hold of: genuine, ugly, unpolished realness.

The French app launched by former Go-Pro employee Alexis Barreyat along with co-founder Kévin Perreau, first hit app stores in December 2019, but it only really began to make its way into the mainstream this summer. The premise is simple: at a random time every day users are served with a notification telling them it’s “Time to BeReal”. At that point you have two minutes to take a photo (using both the front and back camera) of whatever you’re doing in that moment and share it with your friends. There are a few crucial aspects designed to make the app the ultimate self-proclaimed “anti-Instagram”. Firstly, you can only post one picture a day, and if you don’t like what you’ve posted you only get the chance to delete it once. You can’t see others’ posts until you’ve shared your own – eliminating the urge to doomscroll – and there are no follower counts, blue ticks, ads or brand accounts. So far, so real.

The founders’ mission statement, too, was a real lesson in how to be a disruptor. Where other apps tout the potential to become famous as their main selling point to users, BeReal’s ethos is entirely the opposite: “BeReal won’t make you famous,” the company’s team said in a recent statement. “If you want to become an influencer, you can stay on TikTok and Instagram.” The app also eschews the trend for brand growth. There are no pay-to-play advertising options – in fact, formal advertising isn’t allowed. There are no verified accounts, images disappear after 24 hours and given the random nature of the daily notifications and the fact that each follower has to be manually approved by the account, BeReal has more or less created an entirely brand-unfriendly environment, which was kind of the point.

And yet, something interesting happened recently that sent the social media marketing world into a tailspin. A member of the social team at US fast-food chain Chipotle used their two minutes to share an image of a discount code for the first 100 claimants who saw the snap. Cue a company-wide grimace over at BeReal HQ. As the screenshotted image went viral online, the response that came back was mixed, to say the least. Some just wanted a free burrito, others were dismayed to see a brand in this space. “Oh good, more social media,” one person tweeted, while another shared a meme that read, “Silence, brand.” In all, the whole stunt seemed to perfectly illustrate the inevitable fate of any social media platform today; authenticity has a short lifespan. Put in all the boundaries you want, the machine is coming for you. So how long can we really expect BeReal to StayReal?

This isn’t just anti social media sentiment; the internet has cannibalised its own success before. Think back to the early days of Instagram: snap a blurry close-up of your boiled egg breakfast, slap a 100% Hudson filter on it along with an aggressive black border and you had yourself a post. Sure, the images were grainy, overexposed and kind of ugly, but so is real life. If BeReal says anything about the social media landscape, it’s that people miss that authenticity and the very purpose social media was first invented for: human connection.

TikTok, especially, felt like a return to the weird and wonderful improvised Vine days, where impromptu comedy reigned. Over time, however, smooth professional transitions, perfect lighting, scripting and storefronts became the norm. The potential to sell, promote and grow has sliced reality right down the middle. It’s no longer just enough to do something fun, now you have to do something ~aesthetic~.

“The beauty of social media in the early days was its authenticity,” explains Jack Richards, marketing lead at consumer intelligence platform Talkwalker. “Having the ability to look through a digital window into people’s lives was half the attraction. But as with all digital ventures, these platforms have to make money. The immense costs associated with the likes of Facebook and Instagram mean it isn’t viable for Zuckerberg to fund endless latte snaps and gender reveal videos.”

When the world we live in loves to commodify success, it’s natural that industry and commerce becomes a part of any new venture. And how averse are we to this anyway? Today, most people I know shop on Instagram. Most people edit their photographs before they post. Most of us enjoy TikTok’s clean transitions and catchy, viral sound-overs. Perhaps, then, it’s not that we’re unhappy to engage with brands, influencers and stylised content but that we want clear indicators of when and where these things are happening. In the case of social media, its very purpose is to Trojan Horse certain messaging into your everyday. The whole thing only works if we believe – at least a little – that heavily edited, brand-led content is as real as that first YouTube video in the zoo, which is where our anger comes in. We don’t mind going from users to consumers, only, we want to be in charge of when that happens.

BeReal user Kate, 29, relates to this. “I was an avid follower of certain YouTubers in the early days,” she says. “It felt like a landscape of creativity – much like how TikTok felt before the pandemic hit. Then, I felt there was a ‘boom’ that showed brands how much money could be made from social media stars, which in turn changed hobbyist YouTubers into career YouTubers – and the pressure to constantly perform started to corrupt the platform a bit.”

TikTok, Kate feels, has followed a similar path. “It’s had the same trajectory, albeit much faster. It started as an open landscape for creativity, attracted the attention of brands and became a viable career choice, meaning the content became ‘algorithm serving’. And, as we know, formulas, though useful, tend to kill creative vibes when overdone.”

Take, for instance, the moment Instagram changed feeds to serve people content algorithmically rather than chronologically earlier this year. For many, that was the point at which the app stopped being fun – it was no longer just about seeing friends’ photos, but about predicting what Future You might want to see. Even the Kardashians got involved in the backlash to the new algorithm, with both Kim and Kylie reposting the campaign to revert the change. And yet, Instagram’s revenue and number of users has reportedly continued to rise rapidly over the last two years. While parent company Meta doesn’t release Instagram revenue, Business of Apps’ Instagram Report estimates that the app’s revenue increased 77% from 2020 and 2021, while user figures went up 25%. Even when apps sell out, push product and change our feeds, we still use them. Will that be the case if BeReal eventually follows suit?

Right now, BeReal feels like “an oasis free from comparison”, adds Kate. “I like seeing the mundanity in others’ lives. Everyone just seems to be normalling around. Because of that, I’ve felt a certain reluctance to follow influencers on BeReal,” she explains. “I don’t want the app to attract brand money. I want it to stay sacred.”

There are, however, already enough indicators to give you that twitchy pre-spon-con-world sensation. If it’s not about growing your following, why would there be the need for a bio function, which allows users to tell followers who they are and what they’re about? And more importantly, WTF is going on with the ‘discover’ feed, where users can find strangers’ profiles? If the app is only about showing the mundanity of real life to your close friends and not about getting famous, making money or going viral, why is the app subtly encouraging you to ‘discover’ and follow the lives of strangers?

A quick search on TikTok throws up a whole load of content on “BeReal Tricks” advising users how to create the best “candid” shots, which include “getting up off the couch… because nobody wants to look as though they just watch Netflix all day”. Others advise using the dual camera feature on Instagram Reels to practise your BeReals in the given lighting, while one video opens with the title, “The trick to being authentic.”

So, where next? Most of us know the drill, enjoy it while it lasts, then once it’s over, scroll a little less eagerly, a little more mindlessly and wait for the next thing to come along and offer us a brief three-month glimpse at reality. Bleak, right? Not necessarily. The success of BeReal, the rise of finstagrams and even the growth of accounts calling out celebrities for editing their pictures (one for another day) all serve as a kind of crude backlash to the too-perfect social media world as it is.

According to Ben Marder, a specialist in consumer behaviour in digital technologies at the University of Edinburgh, genuine real-life content is becoming more important than ever, and the user is fuelling that shift. “There is an overt craving for it in response to the inauthentic world social media has become,” he explains. “Authenticity is a trait that we’ve always craved in relationships [digital or otherwise] to help get to know others and for people to better assess themselves against their peers. But now in filtered Instagram world it’s even more sought after precisely because of the lack of it.”

Apps like BeReal, Marder believes, will likely keep cropping up due to this dearth of realness, but they may have shorter and shorter life-spans. “Investors will be watching BeReal and they won’t get excited about future similar apps if BeReal doesn’t do well,” he explains. By do well, he of course means make money – which could involve sponsorship and influencers. “I can’t put an exact time on how long it’ll last but without monetisation [of some kind], not too long,” Marder adds.

The sheer fact that an app like this exists, though, shows we do want that change. What BeReal represents, he says, is a “core following who are rising up against the idealised content machine”. BeReal may not be the whole solution, particularly if the app eventually caves to the pressures of spon-con and influencers, but it certainly could be the start.