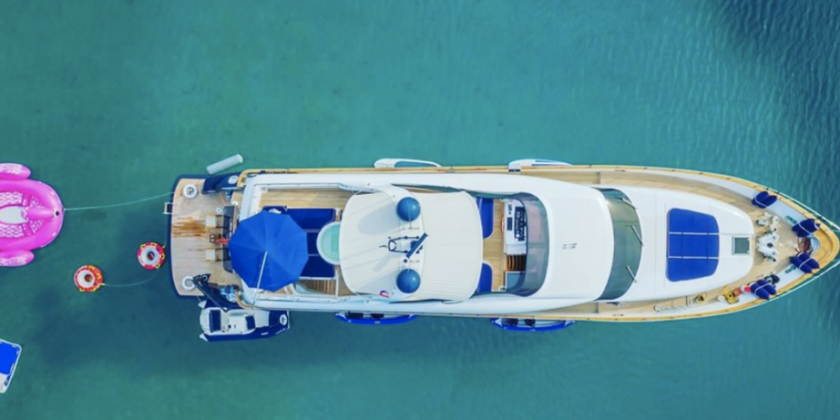 By now just about every Below Deck fan has seen the infamous accident that occurred this season on My Seanna.

Deckhand Ashton Pienaar was yanked off the swim platform by a rope which attached to his ankle. The scene played out again (and again) beginning with the season’s trailer. Plus Bravo pulled a fast one on fans and teased the episode over two weeks (angering fans).

But now that the season has wrapped and viewers are on the eve of the reunion, Bravo tossed fans a little treat post-Super Bowl. Below Deck Behind the Episode offered a play by play account of what happened during the big accident. Plus, producers lobbed some tasty insider morsels, like who snores the loudest. Also, which crew member is most comfortable being naked.

The accident viewers saw over and over only took three minutes from when Pienaar was pulled from the swim platform to confirmation he was safe. If someone goes overboard, is for crew members to remain on deck and not jump into the water. Because then you could potentially have two people in peril. Also, if someone goes over, the captain must kill the engine immediately.

Pienaar says he remembers everything vividly. This includes the tug on his ankle and looking down to see the line wrapped around his ankle. Brent was the only cameraman on the swim deck at the time. After his quick thinking, Brent confirmed Ashton was o.k. and then picked up his camera and continued to film. could not break the “fourth wall.” So it took days before Pienaar could properly thank Brent and hug him.

During recovery, Pienaar recalls sleeping a lot and watching a few movies Adrian provided for him. He was given anti-inflammatory medication and painkillers to help with his recovery. He reports experiencing a range of emotions. Pienaar went from being “shaken up” to “deadly calm.” To becoming “emotional.” The entire crew, especially deckhand Rhylee Gerber were haunted for some time following the accident. She was standing next to Pienaar during the accident and wished she said “man overboard” three times. However, she was so nervous about alerting the guests to the emergency she only said it twice. Pienaar called his parents after the accident.

Many Below Deck fans wonder how the show is filmed. Bravo confirmed about 10 production crew members are on board while filming. During the accident episode, crew members continued working, which meant production kept filming.

Filming occurs nearly 24 hours. Production begins shooting around 6:30 or 7 am and continues until , over three shifts. Fixed cameras are all over the yacht to catch what camera operators might miss. Although the production team stays in a nearby hotel, they are offered a small room on board the yacht to catch quick naps if needed. Production crew members are allowed to wear white soled shoes on deck. these shoes are only allowed on the yacht. They must be removed when the production member leaves the yacht.

Production staff may go out with the cast members at night. However, Captain Lee Rosbach stays on the ship. Unfortunately for the production staff, Chef Adrian Martin does not feed them. They get their meals from a support chef. Also, the WiFi and cell service is spotty. But production says chief stew Kate Chastain was on her phone most out of the entire cast. The crew thinks third stew Laura Betancourt was on her phone most. What were they doing? Gerber says Betancourt is taking selfies and Chastain is “escaping from reality.”

Who likes being naked (and more)?

Bravo offered some fun details from the cast. Pretty much everyone says bosun Ross Inia was the loudest snorer on the yacht. However, Chastain may be pulling a decent second on snoring. She agrees she sleeps hard and is lucky to hear her alarm in the morning.

The bunkmates who won “messiest bunk” was (surprisingly) Chastain and second stew Josiah Carter. Chastain says they had few breaks and little time to tidy their area. However, the twosome also had the “loudest” bunk because they liked to play music at night. While their bunk may have been loud, Pienaar says Gerber wins “loudest crew member” award.