In an international first an endangered species that was extinct in the wild has been successfully reintroduced and had its conservation status changed, with Victoria’s eastern barred bandicoot population successfully pulled back from the brink of extinction.

On Wednesday, Environment Minister Lily D’Ambrosio will announce that the bandicoot’s threatened species status has been downgraded to endangered and Zoos Victoria will close its 30-year captive bandicoot breeding program because it has been a success.

From a few dozen individuals, bandicoot numbers have increased to around 1500 in the wild. While a number of species worldwide have been listed as extinct in the wild and then reintroduced, such as the Przewalski’s horse and the Arabian oryx, they are still supported by global breeding programs.

Amy Coetsee, a threatened species biologist at Zoos Victoria who has worked with bandicoots for 16 years, described the reversal of their fortunes as “phenomenal”.

“So many organisations and people have been involved in bandicoot recovery over 30 years – it’s amazing to be able to celebrate this win,” Dr Coetsee said.

The successful wild reintroduction of the nocturnal marsupial species is the result of a significant undertaking by volunteers and government agencies. 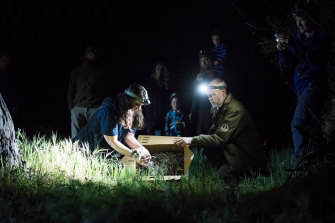 The release of bandicoots into the wild.

Eastern barred bandicoots, or Perameles gunnii, were once common across the grassy woodlands and basalt plains of south-west Victoria.

But they were decimated by habitat destruction, foxes and feral cats.

The last wild population was discovered living in abandoned cars at Hamilton’s rubbish tip in the mid 1980s.

By the late 1980s only 150 animals remained and the situation looked dire. 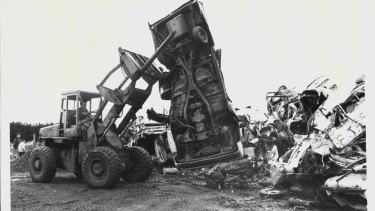 A photo from 1984, when a loader and compactor moved in on the derelict cars that have been home to eastern barred bandicoots at the Hamilton tip.

A recovery program was launched in 1988 and began trialling different approaches, including baiting for feral species and using fences. It soon became clear that foxes and eastern barred bandicoots couldn’t mix.

“Bandicoots don’t recognise them as a predator and foxes will ‘thrill kill’ – kill as much as they want and far more than they can eat,” said Dr Coetsee.

Instead, the recovery program relied on purpose-built predator fences to exclude foxes, and embarked on a breeding program to boost the existing population.

These fences were expensive – about $40,000 per kilometre – for a 1.8 metre-high fence with a chicken mesh “skirt” (to stop foxes tunnelling underneath), and a floppy overhang to prevent them climbing over.

Site monitors had to constantly check them for damage.

The recovery team approached the French Island community about releasing the bandicoots onto the island.

The locals were wary – koalas had been introduced in the 1800s, and it became home to the densest population of the marsupial in Victoria, over browsing the island’s tree canopy. 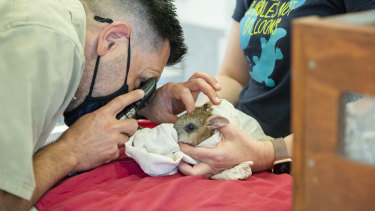 A bandicoot being examined before release.

After 12 years, an agreement was reached and eastern barred bandicoots were released on French Island, and later Phillip Island. Both islands are free of foxes and, combined, offer 9000 hectares of habitat.

The bandicoots are flourishing, despite the presence of feral cats on Phillip Island, says Dr Coetsee. “We know cats are preying on them, and we know they can get toxoplasmosis from cats, but it’s not preventing the establishment of the bandicoots.”

Ms D’Ambrosio praised every member of the recovery team: “Community volunteers have played a big role at many of the reintroduction sites, helping check fences, count bandicoots and remove weeds and pests.”

“This is an incredible first for Australia,” she told The Age on Tuesday.

The resurrection of the eastern barred bandicoot stands in contrast to the situation for some other critically endangered Victorian species. 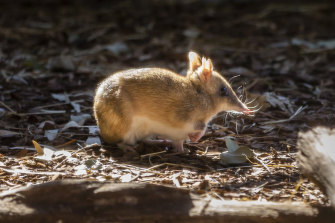 Eastern barred bandicoots are no longer extinct in the wild

Environmentalists recently warned the state government is failing to protect Victoria’s rare plants and animals after an inquiry revealed the Environment Department would take five years to complete “action plans” for 2000 threatened species.

A trial using trained maremma dogs to guard eastern barred bandicoots is underway at Skipton and Dunkeld, with 20 bandicoots watched over by two or three dogs at each site.

“If it works we could have one day have bandicoots across mainland south-west Victoria again,” says Dr Coetsee.

Instead of being protected by expensive fences we will protect them with dogs.”