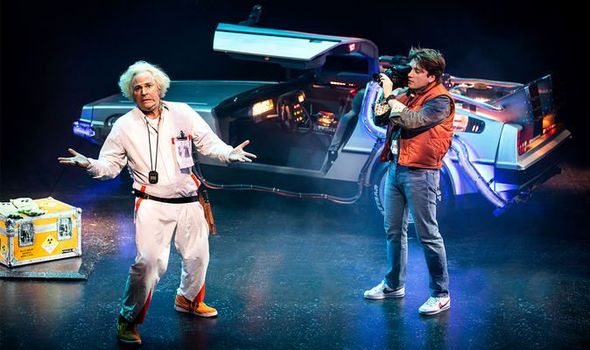 But thanks to the involvement of the film’s originators including director Robert Zemeckis, writer Bob Gale and composer Alan Silvestri, the story is faithful to the first movie while adding its own theatrical grace notes.

The Flux Capacitor is still the power pack that will take the adapted DeLorean from 1985 to 1955 in 7.5 seconds and the warnings about altering the past to affect the future/present still go unheeded.

It takes a few scenes to ignite but once the engine is revving it gathers an unstoppable momentum.

The songs are geared to each period – Doo Wop and faux Phil Spector songs dominate in the 1955 era, while 1980s music is more than vaguely reminiscent of Robert Palmer’s Addicted to Love and post-disco hits.

Best of all, the special effects are beyond belief.

Tim Lutkin’s lighting alone is worth the admission as the neon structure extends into the audience and the video projections by Finn Ross (who also did Frozen) create the illusion of the speeding car until the final climax.

No spoilers. Just be ready to duck.

There is plenty of emotional heart, too, along with an edgy relationship between Marty and his teenage Mum — “My mum has the hots for me!” — delivered in the best possible taste.

A couple of bland numbers could be ditched to bring it under 2 and ¾ hours but it is still a blast and a half of high-performance performances, staggering special effects and a fistful of decent songs.

Does Marty play Johnny B Goode and do the Duck Walk? That would be telling.