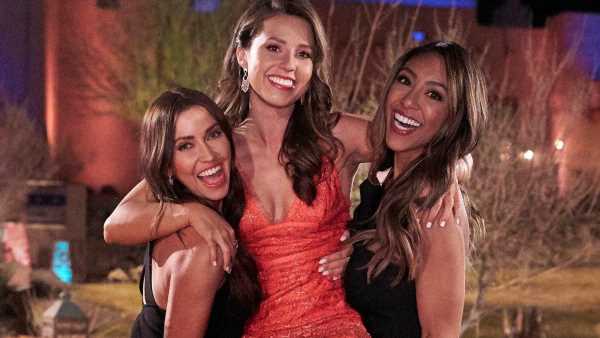 A familiar face from Bachelor Nation is poised to join the quest for Katie’s love as former Bachelorettes Kaitlyn Bristowe and Tayshia Adams make their co-hosting debuts, replacing Chris Harrison.

A new season of “The Bachelorette” kicked off with one of the franchise’s most exciting and authentic leads yet, as well as new co-hosts, a lot of weirdness, some unexpected tension, “bro,” and some early contenders for Katie Thurston’s heart.

Who got the First Impression Rose? Who made the most ridiculous entrance in an attempt to get Katie’s attention — and did it work? Who went in for the kiss on the first night? Who’s trying to establish themselves as the alpha male? And who’s already picking a fight … seemingly for no reason at all?

This season’s batch of contestants certainly appears prepared to bring a whirlwind of a season, and we apparently haven’t even met all of them yet. Okay, that’s not completely accurate. While they’re not all there yet, we have met all of them.

And it’ll be doubly awkward for him, as Blake Moynes is not only going to be trying to jump into the fray for Katie’s affection, he’ll be doing so in front of his own ex from Season 16, Tayshia Adams, who’s performing co-hosting duties alongside fellow Bachelorette Kaitlyn Bristowe.

Will she provide any input about Blake for Katie? Will his attempt to get into Katie’s season end in quick flames just like Heather’s attempt to jump into Matt’s?

Since we’re talking about Tayshia, we should really talk about her, and Kaitlyn. Chris Harrison’s role on the Bachelor franchise was always a little different than most hosts. He seemed to have less to do in the day-to-day operations of the show, but he did serve often as a calming presence.

As such, he’s perhaps not as difficult to replace as someone like Jeff Probst or Ryan Seacrest. That said, Kaitlyn and Tayshia did an admirable job of performing their perfunctory duties as host of the show, with Tayshia appearing a little more confident.

But their most important role, which is to serve as that steady voice of calm and reason, they might even do better than Chris. While he knows this show on almost every level, these ladies have gone through it. They know exactly what she’s experiencing at any time.

And because of the tight Bachelor Nation community, the ladies three are already friendly. This makes them almost more like girlfriends helping Katie through the craziest speed dating experience of her life, and what could be more valuable than girlfriends who have your back?

The final scene of the episode, with the three of them laughing over a bottle of champagne (and trying to open it), showed just how valuable they already are in helping Katie find her ease and confidence on this journey.

One of the more inexplicable and bizarre things producers did — they do work hard — was to let Katie think she was going to have to do this whole season alone with no host at all. It was already known Chris would not be a part of it.

It ultimately gave us some anxiety from Katie and one cute scene where Kaitlyn and Tayshia snuck up on her, but that was about it. Was it worth it to put Katie through that much emotional stress and turmoil? Oh, who are we kidding. That’s the lifeblood of these producers.

As a lead, Katie was exactly what we expected. She was bold, assertive, absolutely in love with a bad joke, a cat pun, or a heavily-implied sexual innuendo. The way to her heart is through her funny bone, and several of the guys definitely delivered.

As tonight was mostly about the guys, we didn’t get as much of a chance to see her shine, but it’s a testament to how strong she was on Matt James’ season that so many of these guys made reference to how she lifted others up, stood up for what was right and so on.

Katie made an incredible impression in that season, earning this chance of her own, so it was nice to see that spotlighted so heavily in the episode. This week was more about the men telling her that she was the reason they were there, and how impressed they were with her.

The rest of the season will be her chance to continue showing that, and we’ve no doubt she will. Even her opening toast was designed to put everyone at ease and allow them to not be perfect. Just being themselves was enough, and they delivered.

Katie even surprised herself, expecting to be drawn to outspoken extroverts who light up a room (much like she is) only to find herself drawn to a lot of the guys who were a little shy or stuck more in their nerves.

It’s nice to see her self-aware enough to set aside those pre-conceived notions (her co-hosts advised as such) and be open to whatever happens.

You can’t have a season of “The Bachelorette” without suitors, and on these shows, it’s all about how you can stand out and leave the Bachelorette with a good first impression. Some definitely did their homework on Katie, delivering in just the right way to get her attention.

A lot of the guys were very earnest and sincere and sweet with their hellos, which didn’t give Katie much to go on except that they were hot. She felt that way about all of them, which just proves the casting producers did their homework, too.

But earnest and sincere does not earn you a spot in the Bachelor/Bachelorette Hall of Shame. So who did take that spot this year?

We’ll be honest, we were enjoying the cat costume as much as Katie clearly did, and James definitely made an impression with his giant gift box he stayed in through most of the night (talk about anticipation!), as did Cody, with his blow-up doll named Sandy.

Justin got a lot of sexual innuendo out of a paintbrush, while Quartney played on both the Q in his name and then took that wordplay straight into the gutters and Christian got dirty with a genie’s lamp.

Some were just plain silly, like Tré’s truck-bed ball pit and Michael’s genuinely funny joke about the watch he brought. But others were just plain stupid, like Hunter’s dead fish and Kyle ripping his boxer briefs out of his pants (were they the ones he was really wearing? — yuck!).

But easily the worst was Jeff and his junked-out RV. We’ve seen quirky vehicle arrivals before, but this one turned out to genuinely be his actual RV. He brought Katie to it later, and his dirty laundry was laying around. It was not a good first impression, or second one for that matter.

Katie made it clear from the top that she was open to kissing guys on the first night, and it’s a good thing she was because several guys went for it. We may not have seen all of them, but we definitely got kissing action with Justin, cat-man Connor and Greg.

There were definitely the starts of some very cute burgeoning relationships between the Bachelorette and some of the guys, and thankfully no early front-runner like Clare Crawley with Dale Moss.

But that doesn’t mean we didn’t have some arrogance, aggression and what-the-hell-is-wrong-with-this-dude moments. Let’s break down some of the night’s first impressions:

First Impression Villain: It could just be a first impression, but Karl is coming on strong and not even with Katie. He is looking at every other guy there as competition, and started to lose it already at the thought James (the guy in the gift box) might get the First Impression Rose after spending the night inside a box. Either he just gives great quotes, or he’s being set up to be a villain down the road.

First Impression Meathead: We might be missing some context, but from our point of view, Aaron came out of nowhere to confront Cody outside and tell him he doesn’t like him. Even better, he tried to argue that it’s not his fault he doesn’t like Cody. Hot-headed and not too bright? Or just incapable of taking responsibility for anything? Why is he picking this fight?

First Impression Friend Zone: It always happens, it even happened to Katie with Matt James. Someone is incredible, the chemistry is easy and somehow they become just a friend, not seen in a romantic light at all. Katie and cat-man Connor have great chemistry already and really connected — even kissing to his and her surprise — but we have a feeling it might not go the way he wants.

First Impression Bad Impression: Do we need to say anything more about Jeff’s nasty RV?

First Impression Awkward: Quartney is as quirky as his name, and he comes across like he’s a bit socially awkward, prone to blabbering on, shifting gears and being a bit all over the place. He seems very intelligent, but also extremely awkward. There was plenty of nerves, but we suspect Quartney lives in this space. So far Katie is digging it, and he’s definitely endearing.

First Impression Rose: Greg connected with Katie in the most subtle ways, sharing with her a pasta necklace made by his three-year-old niece. He was nervous, but also very sweet, surprising Katie in how much she found herself drawn to him and some of the other quieter guys.

First Impression Front-Runners: It’s way too early to predict a winner, or even a Final Four, but when has that ever stopped us? We’ll put a pin in Blake, because Katie seems like someone who likes a twist and might appreciate his effort (Matt was already dealing with chaos from his women over late arrivals). Right now, we’d say Greg is pretty likely to go deep into this season, and possibly even win it. There’s just something intangible going on there. Andrew and Tré seemed to have breezy, fun connections with her, as well, so we’ll throw them in the mix. We still think Connor gets friend-zoned, so we’ll round out our picks with Cody … so long as he doesn’t get too mixed up with Aaron and show an ugly side.