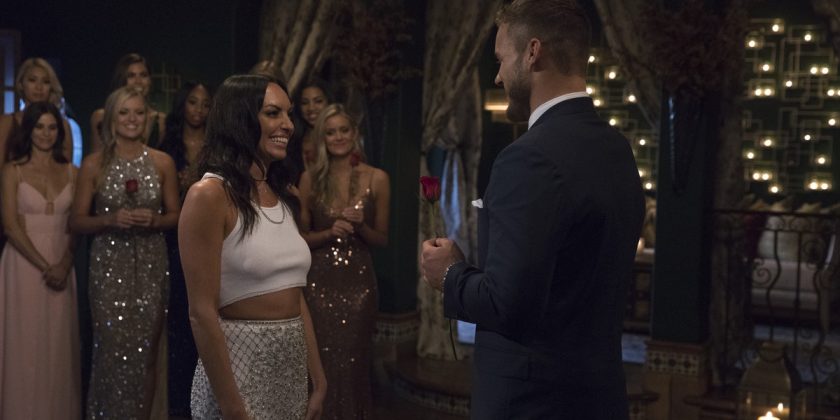 If her fashion police-themed entrance didn’t give it away, Bachelor contestant Tracy Shapoff’s Instagram account is all the evidence you need to see she’s got the style game on lock. After all, the Pittsford, NY native vying for Colton Underwood’s final rose is a wardrobe stylist, who helps "celebrities look their best," per Tracy’s official ABC bio. So while it’s no surprise that Tracy is an #OOTD queen, what’s more revealing about her social media posts is that she’s also an avid world traveler, music, sports, and Halloween junkie, and is highly devoted to her friends and family, which, yes, includes some adorable dogs, too.

Just to get this out of the way, there is one recent IG post that stands out: Tracy’s apology for some of her past tweets. For those needing a refresher, the Bachelor contestant expressed regrets over using "extremely hurtful words" in posts (uncovered by Reddit users) that some classified as offensive, racist, fat-shaming, and also as having included her using the R-word. Tracy also seemingly bashed The Bachelor, writing in a since-deleted 2009 tweet, "Do ppl really think they’re finding love on reality tv…or am I just the idiot that watches it?" (Bustle reached out to ABC at the time, but the network had no comment on Tracy’s tweets or her apology.)

Tracy’s other IG posts tell a much happier story, however. Over the years, she’s celebrated several career milestones, including assisting with styling Elizabeth Banks, Sally Hawkins, and Octavia Spencer for the 2018 Vanity Fair Oscar Party. Other past awards show highlights, including helping dress The Big Bang Theory‘s Melissa Rauch for the 2017 SAG Awards and getting singer-songwriter Julia Michaels red carpet ready for the 2017 American Music Awards as well as the 2018 Grammys.

Another proud moment: When her team styled James Franco and brother Dave Franco for the 2018 Golden Globes, both brothers landed on GQ‘s Best Dressed List.

Per Tracy’s IG account, other past styling clients have included: Gillian Jacobs, Ahna O’Reilly, Constance Wu, Toni Trucks, Nastia Liukin, Diane Guerrero, and Jermaine Fowler. As also seen in her posts, Tracy has worked as an assistant wardrobe stylist for MTV’s Undressed and on the wardrobe team for America’s Got Talent Season 13.

Also showing off some pics taken at runway shows from fashion designers like Mara Hoffman, Erin Fetherston, and Nicholas K, Tracy once found a street style photo of herself on Pop Sugar in 2015.

All of her hard work lead up to a November 2015 post when Tracy announced to her followers (she has more than 4,500, as of publication) that she was moving from New York City to Los Angeles. "LA I hope you’re ready for me…it’s time to make some new memories!" she wrote.

More than three years later, she’s done just that, along with the real stars of her Instagram: her family, including her sister Nicole Shapoff, whom Tracy’s called her "best friend, biggest supporter, role model, "real model" ?, and other half" in an IG caption.

Never one to miss the chance to post birthday, anniversary, or holiday social media tribute (often hilariously sharing her dad Gary Shapoff’s old headshots), Tracy has also traveled the world — often with her big sis by her side. Among the many countries Tracy has visited: Greece, France, Italy, Amsterdam, Germany, Spain, Mexico, Sweden, and Jamaica.

No stranger to nights out on the town with her girlfriends, Tracy’s first Instagram post in 2011 show’s her all dressed up for Halloween with a group of friends. It was the first of many Halloween posts since then that have included the following of her costumes: Lisa "Left Eye" Lopes from TLC’s "Creep" music video, Princess Jasmine, Pebbles from The Flinstones, Alice in Wonderland‘s Queen of Hearts, the Biblical character Eve, Barbie, Jennifer Lopez (from the 2000 MTV VMAs), Dionne from Clueless, and Leeloo from The Fifth Element.

Tracy’s also a bit of a fangirl herself. An alum of Ohio’s Kent State University, she once posted she was "raised a Cleveland fan my whole life," and, as such, roots hard for both the Cavaliers and the the Cleveland Indians. (She even pitched on her high school softball team, the Pittsford Mendon Vikings, according to another post.)

And when it comes to music festivals, she’s hit them all, including Coachella, Governors Ball, FYF Fest, and Soulquarius. Although she’s mentioned being a fan of artists like Brandy, TLC, John Mayer, and Drake, when it comes down to it, Tracy seems to be a true Belieber.

When attending a 2013 Justin Bieber concert, she proudly carried a sign that read, "Justin, As long as you love me, I’ll never say never." She also called her Bieber Purpose Tour tee her "Fav concert purchase ever. "

While her friends and family are consistently by her side, she hasn’t posted photos of past boyfriends, except for a man named John, whom she referred to as her "bf" in several posts around 2012 and 2013.

Now, of course, she’s looking for Colton to fill that role, and her Instagram went blank from early September 2018 until November when she re-emerged to thank her family for being her support system.

Following Bachelor filming, she spent the holidays with family and friends, of course, even dressing up for a pal’s Matrix-themed birthday party and ringing in 2019 in Miami at an 80s-themed bash. "For years I have wanted to find a way to repurpose my mom’s beautiful wedding dress and I was finally able to find the perfect moment," she wrote. "It was so special to me to be able to wear this almost 40 years (1980) after my parents married. I couldn’t have been happier to ring in the new year with people who I love in a dress that means so much to me. Cannot wait to see what 2019 holds, I know it’ll be good one!"

As for whether or not that involves a televised proposal from Colton, Bachelor nation will have to stay tuned.