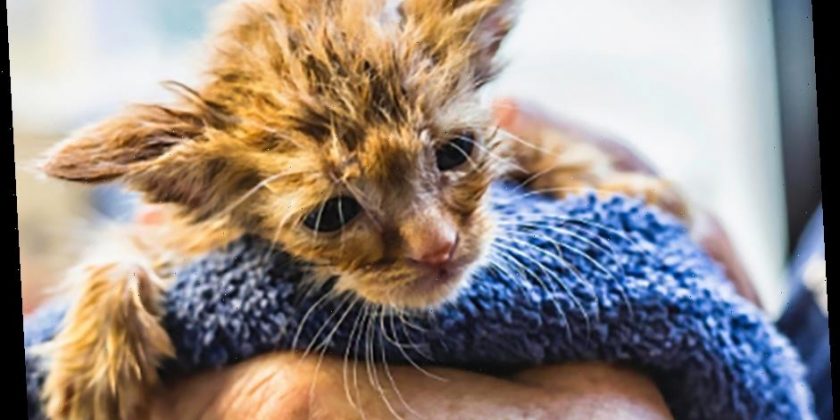 A weeks-old kitten with a strong resemblance to Baby Yoda was rescued last week in California, where a series of devastating wildfires continue to burn.

The North Valley Animal Disaster Group shared in a recent Facebook post that the kitten was rescued by firefighters battling the North Complex blaze, which has burned through over 304,000 acres in the past 37 days.

"Over this past weekend, Firefighters rushed this tiny 2 or 3-week old kitten to the Cal Oak Animal Shelter. They found her in the middle of the road on their route, thank goodness!" the group wrote in the social media post alongside two photos that showed how the kitten’s ears go out to either side, just like the beloved Mandalorian character.

Although the adorable kitten "came in covered in smoke and ash," Baby Yoda’s story has had a happy ending so far.

After receiving immediate medical attention, the kitten was given a bath and two minutes later, she was able to get a much-needed catnap. For now, the animal group says the feline is "being cared for by a medical foster to receive the special care she needs."

As of Friday, at least 26 people have died due to the ongoing wildfires, which have been burning since last month, according to the latest report from the California Department of Forestry and Fire Protection.

Although the North Complex Fire is now 78 percent contained, weather conditions are still "ripe for wildfires."

"A significant warm-up begins Saturday, stretching across the state into the following week, with a chance of record-breaking highs in some areas. Locally gusty winds may also occur, bringing elevated fire danger," Cal Fire stated, noting that several alerts have been issued, which will remain in effect until Monday.

A website has also been created to help reunite pets lost during the fires with their owners.

To help communities facing destructive wildfires in the Western U.S., consider donating to the following organizations:

• The American Red Cross allows donors to direct funds to support people impacted by the fires.

• GoFundMe’s California Wildfire Relief Fund aims to “support a range of needs” by issuing “grants to individuals, organizations and communities that have either been impacted themselves or are dedicated to helping.“

• The California Fire Foundation “provides emotional and financial assistance to families of fallen firefighters, firefighters and the communities they protect.“