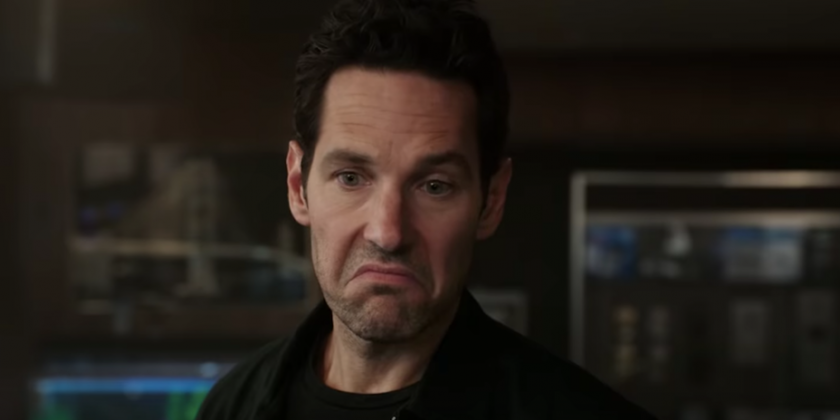 He’s baaaaack! Ant-Man is gearing up to officially join the Avengers in Avengers: Endgame (previously known as Avengers 4), or at least that’s what the first Endgame trailer suggests. Ant-Man appears at the very end of the trailer, quite literally knocking on the Avengers’ door, looking for Cap. While this is objectively great news, it also raises a lot of questions, specifically, how did Ant-Man get out of the quantum realm after the end of Ant-Man and the Wasp?

In the first trailer for Avengers: Endgame, released Dec. 7, fans saw many interesting things. For one, Tony Stark (Robert Downey Jr.) is readying his deathbed. And Black Widow (Scarlett Johansson) seems to have taken lead with Captain America (Chris Evans) back on Earth. Meanwhile, Bruce Banner (Mark Ruffalo) is looking at the faces of those they lost. And then, there’s Ant-Man (Paul Rudd), who has apparently escaped his tiny fate from the after-credits scene in Ant-Man and The Wasp.

Last fans saw Lang, he was floating in the quantum realm after trying to gather matter that would help Ghost, aka Ava Starr, regain stability after being warped with quantum energy, which is currently killing her. However, while in there, Thanos’ snap occured, and Hope van Dyne, Hank Pym, and Janet van Dyne — who were all monitoring him and in charge of getting him back to his normal size — all turned to dust. Being as they were the ones who sent him into the quantum realm, it looked to many fans like there might be no way out for Ant-Man. But it looks like he managed to have done just that in the new trailer. The question is: how?

After the serious setup that the trailer lays out for fans, the last 20 seconds is kind of a mood changer. Scott’s voice is heard yelling in a video Steve Rodgers is watching. Even in a tense situation, Lang brings a bit of humor to the scene by trying to get their attention, yelling "Is anyone home?" Lang continues with, "We met a few years ago. At the airport. In Germany? I got really big." Of course this is in reference to their time together during Captain America: Civil War when they were fighting on the same team against Iron Man and his squad.

Captain America is sitting in awe as he asks Black Widow if that’s an old message. This is because, since the van Dyne/Pym family were all turned to dust, no one was around to set the record straight that Scott was still alive. When he also went missing the same day as Thanos’ snap, it was most likely presumed he was one of the 50 percent of people that disintegrated, as seen in the trailer when Bruce is looking at pictures of the lost. Scott Lang’s headshot is up there with the words "Missing" underneath; Shuri’s and Peter Parker’s faces can be seen on that monitor as well. But Black Widow confirms it’s actually live footage from the front door.

So, back to the quantum realm. Fans might remember that in Ant-Man, when Hank Pym (Michael Douglas) first warned Scott about it, it was in response to Scott learning the dangers of going sub-atomically small. "It means that you would enter a reality where all concepts of time and space become irrelevant as you shrink for all eternity," Hank said. But fast-forward to now, and viewers know that not only did Scott survive that first time in the quantum realm, Hank Pym survived it as well when he went in to save his wife, Janet van Dyne, after decades of being stuck in there.

So while it has been proven that Scott can get out of the quantum realm, he’s a bit stuck without a ship or other device to help him out. And considering he’s waiting for them to bring him back, and the rising panic in his voice, Scott doesn’t seem to have a way to bring himself back this time. If Janet couldn’t get herself out for years and years, how did Scott succeed? Well, as Michael Douglas presumably confirmed recently, the quantum realm is the key to defeating Thanos once and for all.

Despite Janet’s warning to stay away from time vortexes, it’s possible that Scott used one to save himself this time. Plus, major theories about time travel have been around since Infinity War as being one of the only ways for the Avengers to come out on top after Thanos’ snap. And with Scott showing up to their door with his van that has a mini quantum tunnel inside, he could hold the key to said time travel. Will it be safe? Nope, but it might get the job done.

There are a few fans out there, as well, that think it’s not actually Scott Lang but a Skrull in the form of him. It would explain why he repeatedly said who he was: "Ant-Man? I know you know that. That’s me."

One user, @TheRexterrr, was among a few to point out that another shape shifter could have taken Ant-Man’s form: Loki. That might be a reach, but you never know honestly. Loki has faked his death before.

However, that behavior could easily be explained by the fact that Scott was starstruck by Captain America in Civil War and is still a little nervous about meeting again. It’s possible that he also doesn’t think Cap would remember him. He’s also most likely a bit frazzled from saving himself from the quantum realm.

There’s a lot going on here, and the quantum realm can be so confusing, and hold so many more secrets, that it could literally mean many things for the Avengers. But one thing is certain: if Scott Lang found a way to manipulate or travel through the quantum realm, it’ll be a vital weapon to fight back against Thanos and the deaths he’s caused.