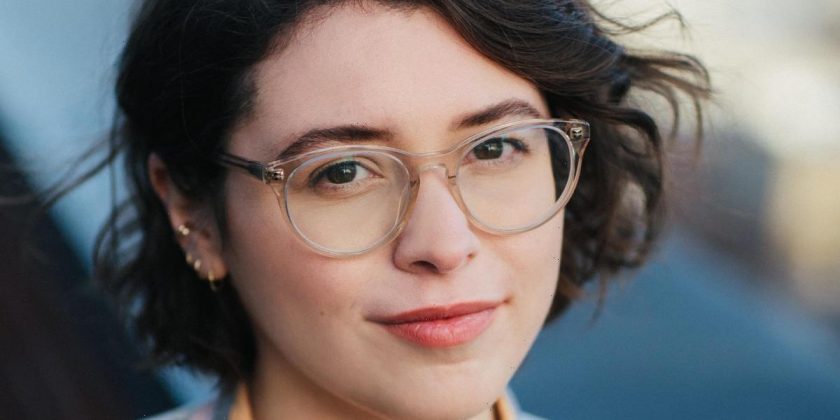 At 12:23 a.m. on Tuesday morning in Brooklyn, New York, a curly-haired girl in a matching two-piece fuschia suit jumped down the step of the bookstore Books Are Magic, shrieking ecstatically, eyes still glued tight to the smiling author waving behind the arched glass doors.

“Nobody talk to me!” she exclaimed, before grabbing her friend’s hand and doing a small happy dance down the street.

In her hands, clutched tightly between her fingers and a small tote bag, was “One Last Stop,” the latest book from Casey McQuiston, which debuted Tuesday morning to at least 100 in-person guests at the indie bookshop and an entire literary world waiting to read McQuiston’s sophomore offering. 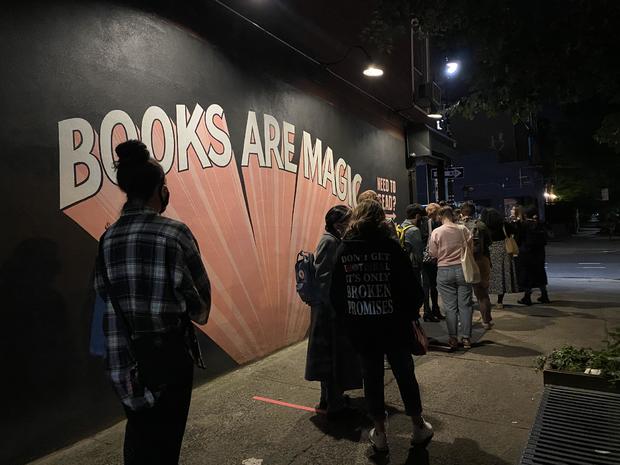 But beyond the world of bestseller lists and midnight releases, McQuiston’s life was (and still is) far less chic than their fans might expect. After becoming a New York Times bestselling author for their debut book “Red White and Royal Blue,” they were living in Colorado with three roommates, a whiteboard for a door, and their poodle Pepper when they got the idea for their newest novel “One Last Stop.”

“I think people have this idea that because my book has been pretty successful that it was a very rags to riches story super quick,” McQuiston said. “But my first book tour, I literally paid for the whole thing out of my own pocket. I was doing book events where I was signing 200 books and then going home and sleeping on my friend’s bean bag chair in our living room.”

Sound familiar? Then “One Last Stop” might be for you. Set in the Brooklyn neighborhood of Flatbush, “One Last Stop” tells the story of intrepid August Landry and punk rock activist Jane Su. August is a newcomer to New York running from the past and Jane is a mysterious girl on the subway who can’t seem to figure hers out. “One Last Stop” paints a picture of two girls’ New York as they wrestle with family, love, a 1970s time slip, and life on the Q train. McQuiston spoke to me from their Astoria apartment about accidentally creating the perfect pandemic novel, how their own queer experience inspires their characters, and why they think their newest novel is their best work yet.

can i hear a little commotion for the launch look?? pic.twitter.com/raq0tv7wrO

“When you’re queer, such a big part of your 20s is about finding your people,” McQuiston said. “It’s so much about finding out who you can depend on when you’re broke and finding out which of your friends are going to come pick you up when you’re at your rock bottom and drive you around town while you’re crying, and that’s what I wanted to infuse in this book.”

McQuiston took special care to weave both the spirit of the city and their own personal story into the book, taking dedicated trips to New York to find the truest details to add to the story. August, a detective and Louisiana transplant (like McQuiston), finds herself living with three strangers (like McQuiston). Many of the inside jokes and traditions August builds with her friends were taken directly from McQuiston’s own roommate group, while the apartment she lives in was scouted in person by McQuiston during one of their research trips to New York City.

Jane and August have a magic attachment and are determined to solve a fantastical problem before time runs out. But the real treasure of “One Last Stop” lies in McQuiston’s character development, building out a found family for August that not only speaks of the love and dedication McQuiston has for their characters but truly highlights the author’s queer experience.

“On a personal level, I think this book really resonates with my career journey, because when I was writing my first book, I hadn’t come out to my family yet, and it felt so apocalyptic. The thought of coming out to my family, it felt like it would be like the end of the world. And so I think that’s why the stakes in my first book are so high, because, like, it felt like the entire world in my life at that time, like it could make or break my whole universe.”

“So with my second book, I wrote it when I was out to my family and I stepped into this role of being a lot more publicly queer. I really started to settle into myself, so I think the reason ‘One Last Stop’ feels a lot more quiet was because I was able to dig deep inside myself in a way that I hadn’t been as comfortable doing before.”

The book revels equally in August falling in love with Jane and with her friends, detailing late-night train rides, longing stares across train aisles, and drag queen kickbacks in equal measure; all while the Louisiana native works her butt off to pay her rent, something McQuiston skillfully shapes into a more intimate and nostalgic sophomore offering.

“My first book was very much about rich people falling in love so my second book, I was like, ‘You know what? Let’s talk about what it’s actually like to be broke when you’re 23,” McQuiston said. “I think so much of your early 20s is such a hot mess, and there’s something really beautiful about that that I miss sometimes.”

McQuiston, now 30 years old, thinks fondly on that time, which helps their books read as inventive rather than like a millennial trying and failing to “get with the times.”  Their debut, “Red White and Royal Blue” used well-loved fanfiction tropes to tell the story of Alex Claremont-Diz, the son of America’s first female president, falling in love with Henry Windsor, a crown prince of England.

This approach to the LGBTQ+ romance genre clearly worked in their favor, as the book, which was published in 2019, debuted at No. 15 on the Times’ bestseller list for paperback trade fiction. But what was more unexpected was its second coming, when the coronavirus pandemic made “Red White and Royal Blue” a pandemic must-read thanks to young creators on TikTok, placing the book back on the Times’ bestseller list. 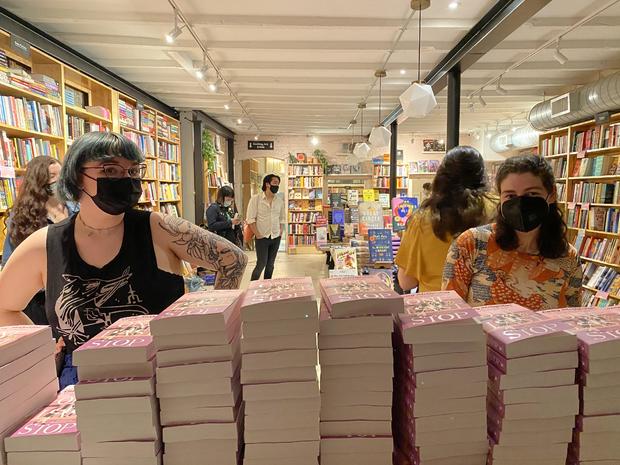 McQuiston makes it clear their books have adult themes and were not created for young readers, but they embrace the audience their books have strongly resonated with and have made strides to connect with them on a personal level. At the Books Are Magic event, McQuiston’s cheerful demeanor greeted almost every young guest, waving and talking to fans, excitedly yelling with those they recognized from past events and meetups.

Earlier this year, they joined TikTok to be closer to their fans, they regularly make Spotify playlists and star sign reveals for their characters, and they’ve been listening to a lot of Olivia Rodrigo while they work. “I write adult romance novels,” McQuiston said. “But I do have a lot of readers that are older teens or even middle schoolers, and I think I need to get them. I mean, If they’re going to get me on the New York Times bestseller list, then I owe them enough to understand them.”

As a romance, “One Last Stop” succeeds by checking all of the expected boxes of a queer romance: two girls lock eyes and their worlds change forever. But as a story about true family, the realities of growing old, and what it means to be queer, the book is a gentle reminder of all that love can be.

Without spoilers, the end of the story deviates from the traditional swelling arc of most romance novels. Instead of a triumphant conclusion, August and Jane’s story ends with a chance for a brand new adventure. This keen focus and understanding of the characters feels like a special love letter from the author, not to a partner, but to their own journey.

“I very much talked myself into moving to New York by writing ‘One Last Stop,'” McQuiston told me about their new city. The lights from their windows stream through their new apartment, and the bookshelves behind them are carefully stacked with coordinated books, their dog Pepper snoozing on the colorful couch to the right of the screen. “I’ve always loved New York, and I spent a lot of time here, but I never really thought I could make it. And now I really feel very bonded to the city. I mean, even after the pandemic, I don’t think I’m ever going to leave. Once you go through something like that, I mean, I’m in it for life.“ 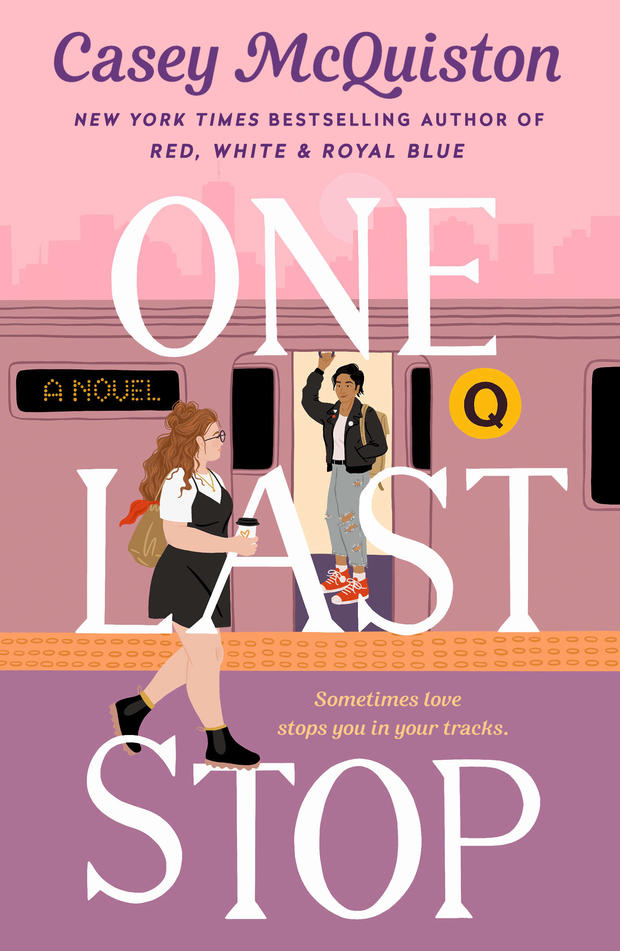