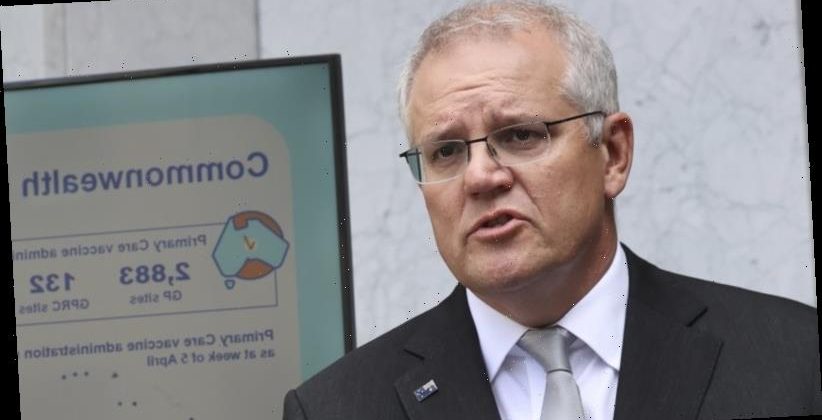 A decision on the science of the vaccine rollout has given Scott Morrison a chance to reset the politics of a troubled program that could decide his fate at the next election.

The Prime Minister is using the guidance of his medical experts – specifically, on the risk of blood clots from the AstraZeneca vaccine – to make changes that should have come weeks ago. 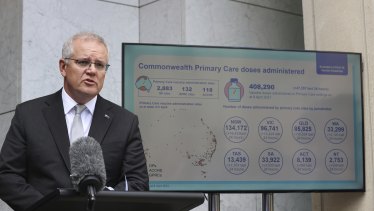 Prime Minister Scott Morrison running through the latest figures on the vaccine rollout on Friday.Credit:Alex Ellinghausen

The government’s addiction to secrecy made it unwilling to admit problems in the programs as vaccine supplies dried up.

One simple fact, for example, was never disclosed. It turned out that 717,000 doses of AstraZeneca had to come from the United Kingdom because none were coming from the European Union. Behind all the assurances, the government was scrambling for shipments.

The most important and immediate change is positive. Australia will gain an additional 20 million doses of the Pfizer vaccine on top of 20 million already under contract.

The Health Minister, Greg Hunt, struck the deal in talks with Pfizer over the past few days. This fills a huge gap when the medical experts are cautious about giving AstraZeneca to people aged under 50, but it is not clear whether all the extra doses will arrive this year.

The timing matters just as much as the volume. A deal on paper means nothing without delivery – as the EU showed by stopping supplies of AstraZeneca. The promise, at least, is that Australia will receive enough Pfizer doses to vaccinate most of the adult population.

Morrison and Hunt should use this moment to own up to some of the false promise of the vaccine rollout.

The first step is to reset the targets. The October deadline for first doses was already unrealistic because of the slow start to manufacturing the AstraZeneca vaccine at CSL’s laboratories in Melbourne. The technical obstacles are not the government’s fault, but voters deserve the facts about the delays.

The second step is to adopt a new approach with the states and stop the blame game over who does what. It is too early to judge which part of the rollout is failing, given the underlying source of every problem is the lack of supply, but there are strong arguments for a faster shift towards mass vaccination hubs.

The third step is to manage expectations. Too many Australians feel they are not being told the truth about the vaccine program. Politicians naturally dislike disclosure, but the secrecy is hurting all governments and undermining confidence.

This reset is a chance to adopt a national approach on releasing daily figures on all aspects of the vaccinations. Governments did it with daily updates on COVID-19 infections last year. They can do it with vaccine jabs this year. This goes for state premiers and ministers, too. They have to be accountable for their progress on a shared challenge.

Morrison was right this week to put a premium on vaccine confidence. He was right to let medical experts decide the response on blood clots, even though the risks are small.

But his mistakes are more obvious by the day as other countries race ahead with their vaccination plans. He was wrong to think Australia did not need more vaccine deals last year – with a larger deal with Pfizer in the first place, for instance.

Would the recovery be stronger this year if the vaccine deals had been bigger last year? The answer is yes. Australia is hostage to a global vaccine shortage.

So Morrison pays a price for his habit of congratulating himself on a job well done. “Our strategy puts Australia at the front of the queue,” he said last November. If only that were true.

Labor leader Anthony Albanese turns this into a basic issue of trust in the Prime Minister.

Australians are more realistic, and can be more forgiving, than the daily political cycle suggests. Some people are in no rush to get the vaccine. Given a choice between a safe and a swift rollout, they choose safety.

The cost of delay is significant, however, and Morrison cannot afford to let the timing slide. The threat to health continues for as long as Australians wait for their vaccinations. The threat to the economy remains, too. Australians want an end to lockdowns, state border controls and closed international borders.

Morrison pretended for too long that everything was going more smoothly than it was. The pressure is on the government to prove the doubters wrong.