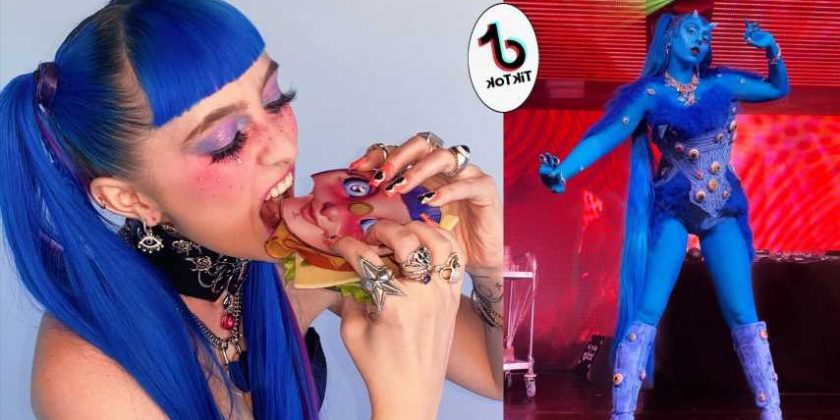 Social media platform TikTok has gone beyond infiltrating the psyche of young tween’s minds and their susceptible addiction to the instant-gratification feedback loop that is the ForYou page. It has forged its way into the music industry, allowing the algorithm to dictate the next hits that top the Billboard charts. With one viral song and an overabundance of videos offering their own visual spins on the track, rising stars can earn both recognition and fame virtually overnight. One such star is Ashton Nicole Casey, better known by her stage name Ashnikko.

Ashnikko stormed her way into the TikTok metaverse in 2019 when she released the popular song “Stupid” featuring Yung Baby Tate on the platform. Quickly, the track went viral and became the soundtrack to every demographics attempt at a comedic or viral video that could launch them into fame. But while the majority of users attempted to enter the mainstream via her song, Ashnikko benefitted from all such attempts, no matter their level of quality. The brilliantly-timed move resulted in a number one single in the UK, a collaboration with fellow cyber-spiritual artist Grimes, and a world tour that included sold-out shows in countries such as Canada, Ireland and England.

While the virality of her music has launched a well-deserved career fuelled by leftover angst, creative direction that parallels some of the best sci-fi cinema to date, and bold fashion decisions such as hiring bodyguards to carry her already-iconic blue hair down the red carpet, it is worth noting the role the social media platform TikTok has played throughout the process. Her method to success can be charted as a course of action for other stars wanting to land a spot on the Billboard charts.

TikTok is known for having the tracks that go viral on the platform find their way onto top spots on the Billboard charts. One of the first artists to achieve this feat was Lil Nas X and his genre-bending, algorithm-driven track “Old Town Road”. The track was a self-described meme that debuted on TikTok but launched a career featuring creative direction that caused controversy.

Ashnikko’s rise to fame reflected a similar pattern. Born in the United States, she and her family later relocated to Latvia in the ninth grade. She developed her style of vulgar angst with a sweet twist and began writing a variety of songs that featured disturbing imagery presented in a fun fashion. Her single “Stupid” debuted on TikTok and was shared continuously by fans on the platform. But these fans included celebrities like Logan Paul, Miley Cyrus, and Cody Simpson. It then quickly became the number two most used song on the platform. TikTok has the ability to dangle fame in front of users that serves as a conveyor belt of opportunity. The addiction to the never-ending newsfeed prompts users to keep creating content, even if they use the same song for multiple videos. And once someone is able to go viral with a certain song, other users flock like moths to a light in the hopes that the algorithm will pick up their video and carry them into the virtual spotlight. This concept of instant success for one viral decision has commanded such a scale of popularity that it is now being reflected in media outlets and record-setting billboard charts. Once Ashnikko gained viral success from “Stupid,” she started releasing additional music, including the track “Daisy” which went on to earn over 97 million views on YouTube alone.

Make it or break it: Cross-Platforming

While TikTok can fuel the musical careers of artists like Ashnikko and Jax, the burden then falls on the artist to utilize the boost provided from the platform. While some artists drift off into obscurity after one successful song goes viral like Roddy Ricch’s The Box and Puri’s “Cono,” others are able to leverage the new following and attention by bringing their new audiences onto other platforms like YouTube, Spotify, and Apple Music where they can access additional music. Such was the case with Ashnikko. After the success of her singles “Hi, It’s Me” and “Special,” she put in the work in expanding her music career which eventually resulted in her debut album, Demidevil. The release of the album also coincided with her becoming a Spotify ambassador.

Another way to solidify a career from the TikTok virality is through consistent collaborations with other celebrities who have already navigated the complex maze of fame. Ashnikko has utilized this element several times throughout her career, with one of the most innovative endeavors being a music video that featured fantasy elements and computer generated animation that featured fellow digital-driven artist Grimes. Ashnikko has also collaborated with fellow TikTok influencer and social star Princess Nokia on the single “Slumber Party.”

The idea of collaboration doesn’t just benefit the newly rising star, either. It can also serve as a means to uplift and rejuvenate careers that are fading out of the mainstream. With a younger audience glued to their screens, TikTok is an easy and accessible way to retain relevance. This has worked in the case of Jax and her collaboration with Impractical Joker Joe Gatto.  It allows both artists to mutually benefit from their respective online communities.

Billboard’s Reflection of the ForYou Page

While TikTok has the Creator Fund to further legitimize the platform to pay creators directly for their content, success on the platform can also seem very ethereal. It’s hard to gauge what the actual implications and benefits will be when going viral on the platform. If someone can make a name for themselves overnight, that means the app also has the potential to take that name away just as quickly. One external way to mark the real-world implications of the viral success is through alternative charts like Billboard for music. The charts serve as a way to show how audiences are engaging with new music and recently, TikTok has been one of the most dominant sources for new music on the list.

Over the course of TikTok’s rise to fame, the billboard charts have started to reflect what songs are popular on the app. In April of 2020, a majority of the songs featured on the Top 10 list already had a prominent virality on the TikTok platform. This included songs like Doja Cat’s “Say So” and The Weeknd’s “Blinding Lights”. The result of the music industry grappling with this significant change has also resulted in more singles than ever before for the music industry.

Ashnikko has been able to leverage her TikTok propulsion to create an expansive career of art, music, and digital media. She has even embraced the viralness of her career by acknowledging and paying homage to the cyber world through both her stylistic decisions and concepts of her songs.

With track like “God is a Machine”, she acknowledges a simulation-theory view of the world popular among digitally-native content creators. Her original music videos reflect a similar theme as Ashnikko often appears as modified versions of herself through the help of both CGI and practical effects. With a full immersion into the digital space and community, Ashnikko has become a virtual metaphor for how TikTok and the metaverse have impacted the music industry as a whole. She proves it’s more valuable to exist online, within the digital sphere, and to expand that form of existence, than it does to continue to play bar shows, open-mics, and other live venues. Though to her credit, she does still pay homage to the traditional ways by designing tours around the world.

With new methods of listening to music developing daily, one of the most important facets to the art is getting the music into the hands, and ears, of as many people as possible. TikTok is now just the latest and most convenient way to do so.