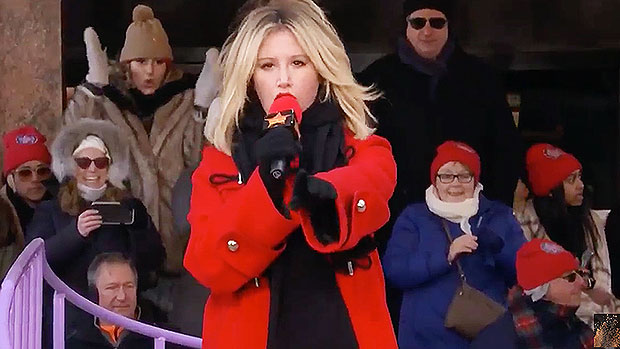 Cutie! Ashley Tisdale thrilled fans at the 92nd annual Macy’s Thanksgiving Day Parade. We’ve got her performance of her new single ‘Voices in My Head’

Way to slay the holidays! Ashley Tisdale made her triumphant return to the Macy’s Thanksgiving Day Parade on Nov. 22 for the first time in 11 years. The 33-year-old rode aboard the Fantasy Chocolate Factory from Kinder float and sang her new single “Voices in My Head” which she released earlier in the month on Nov. 8. She looked amazing in a red coat with a black scarf to protect her from the 20 degree morning in New York City.

This marks Ashley’s return to the Macy’s Thanksgiving Day Parade for the first time in 11 years. She performed her holiday tune “Last Christmas” at the annual event way back in 2007 when she was just 21 and still a Disney starlet during the height of the High School Musical days. She’s all grown up now and that’s long in Ashley’s past.

HSM fans were recently let down when Ash revealed that she’s not up for a reboot of the popular Disney channel musicals in an age of everything old being new again. “I honestly don’t think I would just based off of I don’t know if I could fill her shoes again,” Ashley told E! News referring to her character of Sharpay Evans. “I’ve matured so much I don’t know if I could give her justice — Sharpay — and be that character again and I would hate to not have it be great.” She also revealed that she still sees HSM co-star Vanessa Hudgens socially but hasn’t seen Zac Efron in “a long time.”

Ashley is part of an all-star lineup for the Macy’s Thanksgiving Day Parade that includes John Legend, Diana Ross, Rita Ora, Martina McBride, Pentatonix, and Sugarland. The three hour long parade culminates in front of Macy’s Herald Square where the team from the Today Show will be broadcasting live on NBC beginning at 9am EST.