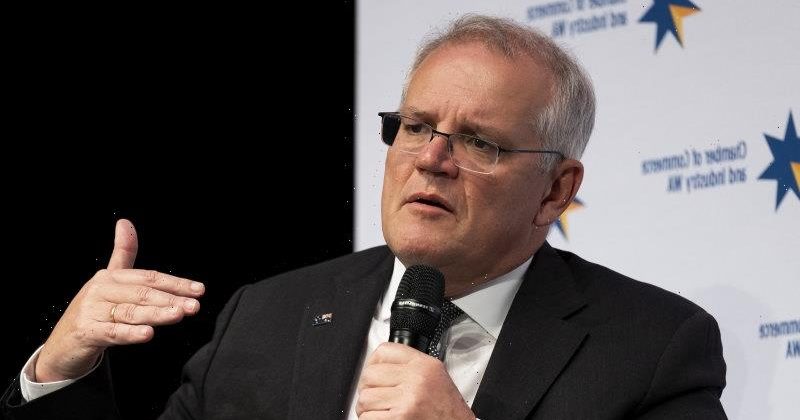 Three years ago, it was unthinkable that the Australian Prime Minister would threaten to impose trade boycotts on China. Yet, this week, this unthinkable also became reality. Scott Morrison said it would be “an abomination” if Beijing were to send military aid to Moscow for its invasion of Ukraine. 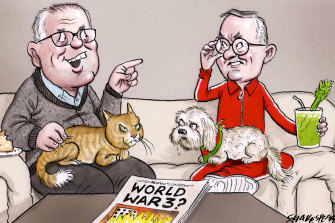 “We will move in lockstep with our partners and allies” in imposing any sanctions on China, as the US has threatened to do, Morrison said without qualification.

This is remarkable. China still dominates Australia’s trade in goods and services. Even after Xi Jinping imposed bans on more than $20 billion worth of Australian products, annual two-way trade is valued at a quarter of a trillion dollars.

That’s 30 per cent of the total national trade, more than the next five countries’ shares combined. Any Australian sanctions against China need not be economic. But economic pain is Xi’s favourite form of coercion. He still has ample scope to inflict more on Australia should he choose.

He has other options, too. The Chinese navy’s foray last month into the waters of Australia’s exclusive economic zone, where a Chinese warship “lit up” an RAAF surveillance plane with a targeting laser, gave Australia its first taste of one of those options.

So Morrison’s emphatic commitment this week, tying Australia’s fortunes to the future decisions of its allies, elevated alliance politics over Australia’s other interests. Any hint of a conciliatory tone with China is gone.

Was this calculation or bravado? Business people, investors, indeed everyone, should also pay heed to another remark of the Prime Minister’s this week: “Global economics is downstream from global politics,” he said. Meaning that global politics takes precedence.

To clear any doubt, Morrison told The Australian Financial Review Business Summit: “A relatively open and free trade and financial order is not a naturally occurring phenomenon. It never has been.” He said “strategic security” is now an “overriding imperative for … economic policy” in liberal democracies. 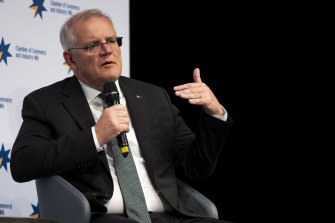 This is a watershed. Three easy decades of apparently limitless market-led globalisation is over. Thomas Friedman’s 2005 book, The World Is Flat: A Brief History of the Twenty-first Century, was flat wrong. Where he foresaw the smoothing out of all government obstacles to corporate-led globalisation, the opposite is now the reality.

One of the most dramatic illustrations of this was the way that Canada, the US and European Union in the past two weeks announced bans on Russian oil and gas. The EU was the most dependent on Russia. It’s so dependent, it could not afford to ban Russia, ran the conventional wisdom, and meant that Russia could intimidate the EU. When Putin’s missiles slammed into Ukraine’s capital on the first day of the invasion, the conventional wisdom was upended in a moment.

Europe’s outrage at Moscow, remorse at its own complicity, fear for its own future and new resolve crystallised in a new EU energy plan. The sentiment was best captured by a Latvian member of the European Parliament, Sandra Kalniete, who helped draft the plan: “We, with our euros, have effectively built and financed Putin’s war machine, which is now being used to slaughter innocent Ukrainians.”

In announcing that Europe’s presidents and prime ministers had agreed on a new plan to cut imports of Russian gas by two-thirds within a year and entirely by 2030, the EU’s foreign policy chief, Josep Borrell, said: “The heads of states and government agreed to phase out our dependence on Russian gas, oil and coal imports as soon as possible. It is not possible for us to continue to feed Vladimir Putin’s war machine through our energy imports.”

The most dramatic change is possible when security is at risk. The US foreign policy scholar Joe Nye once said: “Security is like oxygen. You tend not to notice it until you begin to lose it, but once that occurs there is nothing else that you will think about.”

Ukraine has just demonstrated the truth of this. Australia’s default complacency shows that it has yet to start thinking seriously about its oxygen supply.

Waking with a start, the Morrison government’s 2020 Defence Strategic Update said: “Previous Defence planning has assumed a 10-year strategic warning time for a major conventional attack against Australia. This is no longer an appropriate basis for defence planning … Australia can no longer rely on a timely warning ahead of conflict occurring.”

So thank goodness the government is making all these big announcements about national security, right?

Not if it takes its own Defence Strategic Update seriously. We don’t have 10 years, according to the update, but Morrison’s announcement of nuclear-powered subs says the first one won’t be in the water for perhaps another 20. His announcement of an extra 18000 Defence Force personnel doesn’t take full effect till 2040. And so on.

The announcements are coming thick and fast. The actual capability remains nothing more than pieces of paper.

Liberal senator Jim Molan, a former army major general, wrote last year that “the Australian Defence Force (ADF), even after the $270 billion [promised by Morrison to roll out over 10 years] is put into it, is unlikely to last even a few days in a high-end conflict with China” because it “demonstrably lacks lethality, sustainability and mass”.

But Beijing need not bother with destroying the ADF. It could bring Australia to its knees with a simple blockade on, say, oil imports. Australia depends on imports for 90 per cent of its crude oil supply. And its “strategic stockpile”, uselessly held in America, amounts to all of 1.5 days’ worth of consumption.

And the Albanese opposition’s defence policy is to agree wholeheartedly with everything the government proposes, and otherwise avoid the subject because it judges it to be Coalition territory. So long as Labor avoids talking about it, it will remain so, no matter how poor the government’s performance.

Rather than confront the uncertain future of our national oxygen supply, our pre-election preoccupations are with trivia.

So many unthinkables have become realities in the past three years that we really should be thinking about the next wave of unthinkables for the three to come. My list would include these four.

One. In the past three weeks, pacifist Germany has announced a near-doubling of its defence budget over two years and is now debating the reintroduction of compulsory national service for all young people; almost half the country is in favour, according to opinion polls. Sweden reintroduced limited conscription in 2017.

For Australia, this is unthinkable and for our political leaders unspeakable, but this is a debate we are likely to have to have. The national service need not be military. It could, however, take up non-military tasks that the ADF is doing today, as retired admiral Chris Barrie has suggested. Such as working on emergency relief and staffing aged care homes. The ADF would be relieved to concentrate on war-fighting.

Two. Just as Josep Borrell said that the EU could not “continue to feed Vladimir Putin’s war machine through our energy imports”, Australia will have to confront the fact that it continues to feed Xi Jinping’s war machine through iron ore exports. China has embarked on a policy to diversify its iron ore imports away from Australia in any case; Australia could soon be forced to debate whether to accelerate the process. Iron ore is the country’s biggest export, so this is unthinkable today and for political leaders unspeakable. But China’s aggression may force a rethink.

Just as Australia had to rethink sales of pig iron, part-processed iron ore, to Japan in the 1930s. When the unions in 1938 refused to load ships bound for Japan to build Tokyo’s war machine, Liberal prime minister Bob Menzies forced them to. And earned himself the derisory nickname “Pig Iron Bob” in the process. Of course, inevitably, the trade soon ended abruptly.

Three. Australia soon will be discussing with Washington the options for hosting major US combatants, including nuclear-capable planes and ships and subs, on Australian territory, in rotation or home-basing. It might be unthinkable today and would make Australia a prime target for any Chinese hostilities. But the US will need to move some of its forces further out of China’s missile range; Australian governments of either stripe will take comfort from the further enmeshment of US forces into the defence of Australia.

Four. Any arrangement with the US could be fraught, however. The US could be one election away from abandoning democracy and embracing autocracy. A return to Donald Trump or a Trump protege would be all it takes. That might be the most unthinkable of all. Yet, rather than Albanese’s weight-loss program, we should be thinking about all of them.