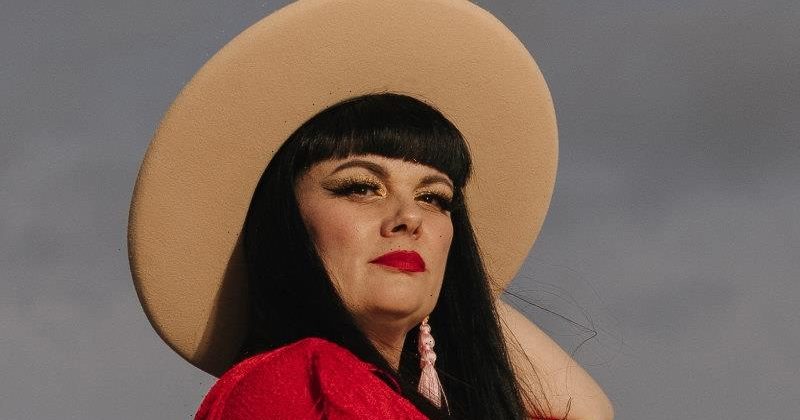 “I’ve had a terrible flu that is going around — not the Covid one, just a good old-fashioned one,” she says down the line. “So pardon me if I sound like I’m hacking up a lung at any point.”

Having grown up north of the 49th parallel but a long resident in the land of the long white cloud, does she hack up a lung in Canadian or New Zealander? 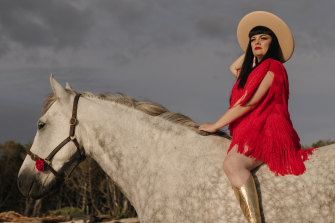 On her new album Tami Neilson sings about not caring about men’s delicate sensibilities.Credit:Sophia Bayly

“I’m bilingual: the right side and the left side,” she guffaws. “I think I’ve grown soft. I’ve definitely grown soft since living in New Zealand for the past 17 years.”

In her younger years, her religiously minded family band regularly traversed the country, hitting the Trans-Canada Highway playing gospel songs so she, her two brothers and their parents could eat. That childhood has had a lasting impact.

“However we grow up, it seeps into our entire lifetime, right? It shapes how we view the world, it shapes what follows,” Neilson says. “I can remember moving to the house we are in now and settling in and feeling like it was a dream. I was so happy but there was this lingering thought in the back of my mind: this is going to get taken away from me any minute; it’s too good to be true. I’d never been in a house this long in my lifetime and I’d keep waiting for the other shoe to drop.

“Even though I’m in my 40s now, there is still that underlying feeling, the [Damoclean] sword of every musician: when is it all going to disappear and I’m going to be back on the rails to make it from one paycheck to the next? You don’t forget.”

Nor do you forget those who were party to it, or who smoothed the road just that little bit.

“I can remember having a conversation with Willie Nelson,” she says, casually.

(Who? “Yeah, he’s kind of an obscure musician I gave an opportunity to be on my album, just trying to share my platform,” and out comes that husky laugh again. To clarify: Nelson duets with her on her new album, in the song Beyond The Stars.)

“And I said to him, when he recorded the duet with me, ‘I don’t know if you can remember the feeling of when someone finally gave you a chance, that moment when you knew this would push you through to the next level, but I feel like you’ve given that to me’.

“He said ‘I remember it well’, and he knows exactly who it was and where it was: the woman who wrote Heartbreak Hotel [Mae Axton], and she was his ticket to Nashville. It doesn’t matter how many decades or how much success you’ve had, those things shape you right from the beginning and you carry that with you forever.”

Axton was yet another woman who was vital in the early days of country or rock or blues or pop but obscured or forgotten by male-centric history. They were, to borrow a phrase from the title of Neilson’s album, kingmakers.

“These women were, and have held up, the foundations of the Nashville music industry without being remembered for it,” Neilson says.

One thing those women were told, as so many have been, was not to show anger and not to demand because that would only put men off and they would get nowhere. But on Kingmaker, Neilson is not following that rule. One song, Ain’t My Job, has great screw-you energy. In another, she sings “I’ll stop begging for what’s already mine”.

One of the life lessons she sings about on the album is knowing what and what not to care about, and men’s delicate sensibilities – and those of white society generally as this Indigenous Canadian woman can attest – definitely falls into the latter category.

“That’s it in a nutshell. It’s coming into your power and your confidence,” she says. “Just by existing as a woman that’s unapologetic about what she has to say on the music she makes and not looking for approval, that makes a lot of people uncomfortable, still.”

Tami Neilson’s Kingmaker is out now.