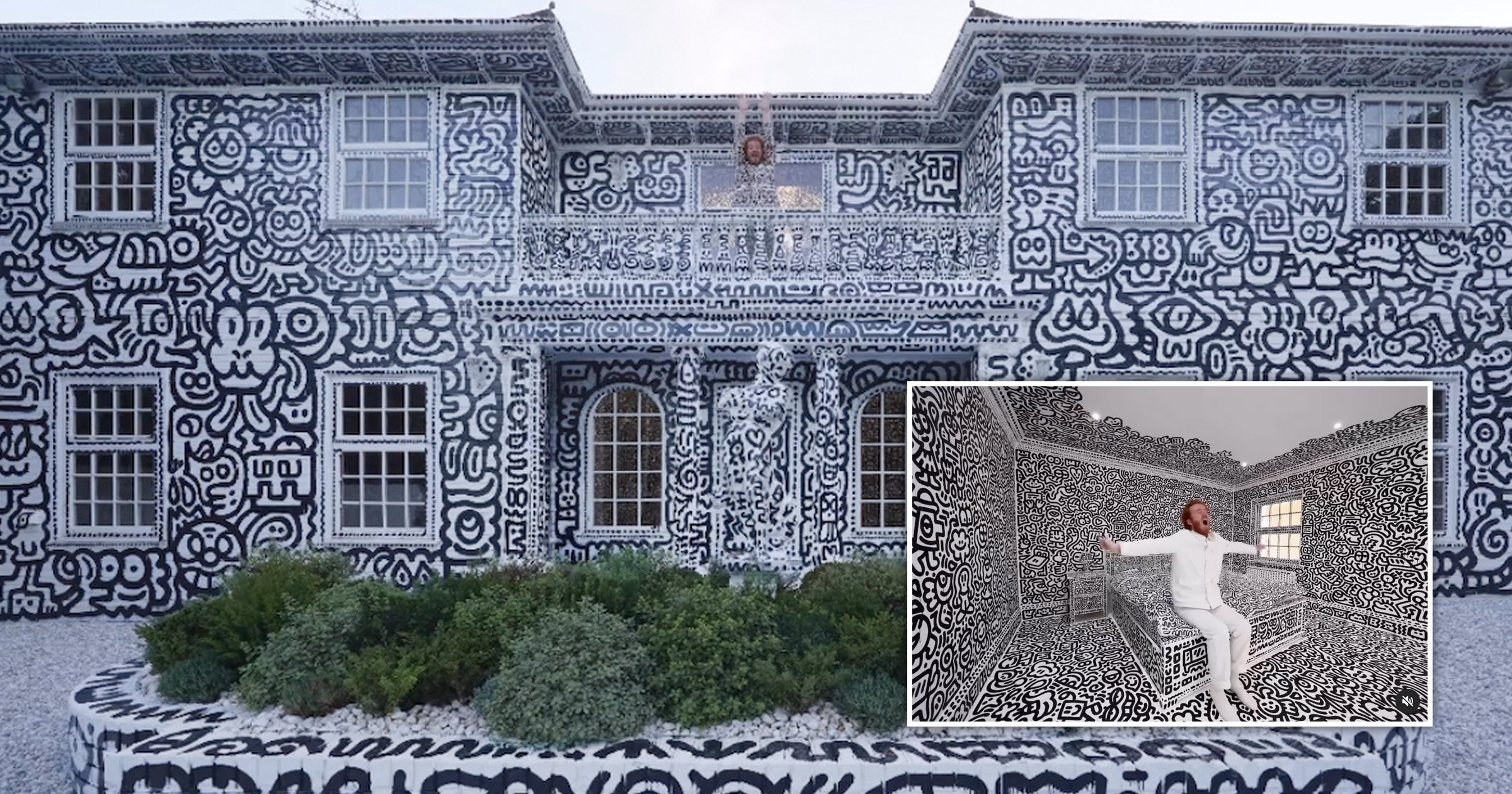 The previous home-owners begged him not to doodle on the walls – but this man couldn’t help himself.

A world-renowned artist has covered every square inch of his £1.35million house in doodles – working his way through 900 litres of emulsion, 401 cans of spray paint, 286 bottles of drawing paint, and 2,296 pen nibs.

Sam Cox, also known as Mr Doodle, has spent the last two years plastering the walls of his six-bedroom, neo-Georgian mansion with the signature black-and-white drawings.

The 28-year-old artist built his 2.7 million Instagram following after studying illustration at the University of The West of England, in Bristol, where he’d spend 16-hour days drawing, earning himself the nickname ‘the Doodle Man’.

He rose to fame in 2017 when he opened a ‘Mr Doodle pop-up shop’ at Old Street station in east London and a Facebook video of his creations was viewed 46 million times in a week.

But according to Sam, his lifelong goal has been to buy a house to transform into a ‘doodle-verse’.

And in 2019, the 28-year-old’s dream came true when he purchased a property in the quaint town of Tenterden, Kent for £1.35million.

Sam said the couple who sold him the house begged him not to doodle on the walls but he ignored their pleas.

He told The Sunday Times: ‘They told me whatever you do, please don’t doodle. I didn’t listen.’

The artist’s adventurous project began in the main bedroom – which he decorated with ‘dream’ themed drawings – and the 2,000-tile en-suite bathroom, which has a sea theme.

The first stage took a gruelling two months to complete, but Sam was determined to finish it on his own.

He added: ‘It’s the longest project I’ve done. I wanted to say I’d done it all myself.’

On Sunday, Sam unveiled the finished product, which he describes as his ‘living artwork’, in a time-lapse video on social media.

He has left no surface untouched, with every wall and ceiling and all amenities, including the television, hob and bath, covered in monochromatic doodles.

Despite admitting he didn’t plan any of his drawings, Sam has given every room its own theme.

For example the hallway is covered with Noah’s Ark creations, while the stairs are decorated with heaven and hell drawings.

He said: ‘I had a rough idea of the theme but the individual doodles are spontaneous.

‘My main inspiration still goes back to when I was kid watching Tom and Jerry, Wacky Races and SpongeBob SquarePants, and video games like Crash Bandicoot. I always wanted to draw characters for video games.’

For the indoor doodles, the 28-year-old explains that he used black acrylic paint and a bingo marker-pen in four different sizes.

All the surfaces have been lacquered to ensure they don’t fade. And for the outside of the property he used spray paint.

The only downside to Sam’s whacky house is that it’s attracted attention from the local children who have taken to ringing the doorbell out of curiosity.

But the artist hasn’t received any complaints from his neighbours yet – so he has no plans to tone down the property’s aesthetic or move house any time soon.

He added: ‘I’m unlikely to be persuaded to move, even if it was amazing money.

‘I’d feel sad leaving this house, because it’s my first one.’

However, he admitted he’d like to spread his creativity further by doodling more houses in the local area to ‘make a doodle town’.

He told KentOnline: ‘The completion of the house is just the beginning of my childhood dream to doodle the entire planet and to encourage the art world to recognise doodles as an art form.

‘I am so excited that my doodles now have a permanent home in the UK.’