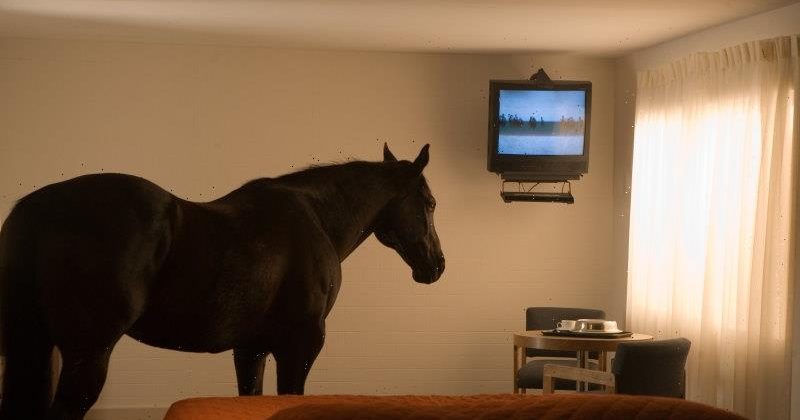 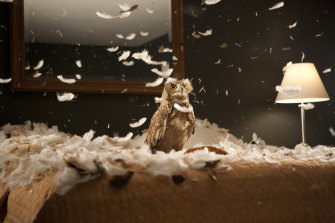 The place that most intrigues Doug Aitken might be no place at all. In the late 1990s, the celebrated American artist, 53, was browsing an atlas when he stumbled on an unnamed section of Namibia, bordering the Atlantic Ocean. It gave rise to a work that would broadcast his vision to the world, 1997’s Diamond Sea.

“It was this large piece of land, not on the map and inside it there were machines autonomously seeking out gem diamonds moving across the surface of the sand,” he says. “It was this contrast that attracted me, this idea of where we have been and where we are moving towards.” An expression of wonder crosses his face. “I was interested in this cohabitation between something so ancient and something so futuristic that it almost rendered the presence of humans obsolete.” 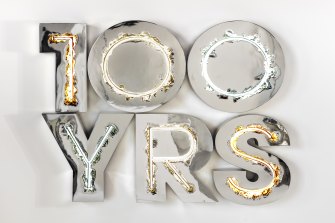 In 1994, Al Gore, then the vice-president of the United States, first referred to the Internet as an “information superhighway”. He didn’t predict how quickly that superhighway would move. Or that the quaint dream of a networked world would morph into our hyper-connected modern reality as comet-fast as the ping! of Whatsapp, a viral dance on TikTok.

There are plenty of highways in Aitken’s work. Airports, too. In Black Mirror, a 2011 video installation first shown on the Greek island of Hydra, the actor Chloë Sevigny, a friend of the artist, plays a glamorous drifter. She lolls on a hotel bed, making a phone call. She flits, frictionless, between places of transit: a lobby, a tarmac. Check in, check out, she intones. The grim voice-over that sums up a life in perpetual motion could just as easily double as the catchphrase of our mid-pandemic moment.

A drumbeat grows louder, propulsive. For Aitken, music, whether by minimalist composer Terry Riley or the British electronic musician Aphex Twin, is important. Watching his best video works, at least to me, can feel a little like standing on a dance floor in a nightclub, back when nightclubs were good. Rhythm inside and outside your body. Sound everywhere and nowhere at once.

Aitken evokes landscapes: sonic, digital, external, internal. But he also shows us how they overlap, how we float between them.

“Doug’s work is [about] this kind of immersion of the senses,” says Rachel Kent, the Museum of Contemporary Art’s former chief curator. 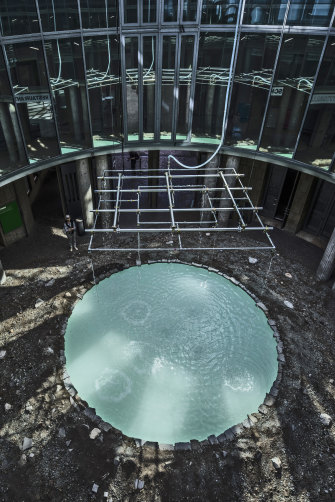 “[It’s] this idea of art as something that changes form and location and meaning and purpose very fluidly,” she adds.

I meet Aitken in his Venice Beach studio over Zoom. Californian light streams in. You can practically smell the sand and surf.

‘Doug’s work is about immersion of the senses … something that changes form and location and meaning and purpose very fluidly.’

“If you look at us as humans, how we see the world, how we process information,” he tells me, “it is very non-linear.”

Aitken, who wears a V-neck T-shirt and has floppy, light-brown hair, is open and unguarded. Almost boyish. But he speaks with the philosophical intensity of someone who’s never not thinking about who he is, what he does. 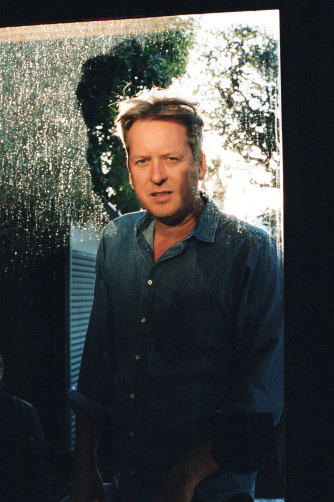 “We create fragments and pieces and we weld them together,” he smiles. “I have always been fascinated by art-making as a tool that gets closer to the integrity of how we perceive.”

Aitken was born in 1968 in Redondo Beach, a coastal city south of Los Angeles. His mother was a journalist, his father a writer and attorney. An only child, swathes of his childhood were spent on the road with his parents: a stint in Ireland, summer in the Peruvian Amazon.

“Everybody grows up in a completely different way,” he says. “For me, it was constantly different people, places, situations. It was like a collage.”

Aitken came to art early. “Visual art, for me, was always like breathing,” he says.

Back then, LA’s South Bay attracted counterculture. As a teenager, Aitken and his friends would roam the wilds of the city, watching punk bands. After high school, he studied illustration at Pasadena Art Centre, relocating to New York in the early ’90s.

There, he rented a room in the studio of the Melbourne-born, American painter Lawrence Carroll, resolving to create new work every 10 days. His breakthrough came in 1997, when he showed Diamond Sea at a space called 303 Gallery.

Two years later, he made a video installation called electric earth (1999). Over eight channels and multiple rooms, a man walks around the fringe of LA at night. He puts money in a soda machine and strides across a laundromat, body jerking spasmodically, possessed by the clicks and bleeps around him. The work won the International Art Prize at the 1999 Venice Biennale. When it showed at the 2000 Whitney Biennale in New York, its notes of alienation and discord felt like a dark harbinger of the new millennium.

Aitken’s gaze is cool, almost anthropological. He asks us, his viewers, to observe, to ask: how are we being rewired by the systems we live within? Where is the border between the natural and the unnatural?

Aitken’s gaze is cool, almost anthropological. He asks us to observe, to ask: how are we being rewired by the systems we live within?

In Migration, the natural world prevails. The 2008 work, the first in a three-part cycle of installations called Empire, sees migratory animals wander motel rooms. A deer hunts inside a bar fridge. A bison buts its head against the side of a bed, trying to topple it over. In a delightful scene, a beaver takes a bath.

“Each room was shot in a completely different location, across the continent,” Aitken recalls. “These creatures do what they do, they are unrestricted.” 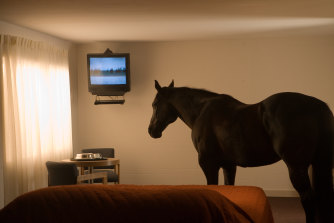 Aitken tells me he doesn’t think about whether his art is accessible. But his work draws from a shared visual language: natural vistas, abandoned spaces, celebrities. “Mr. Aitken achieves an almost unholy truce, if not an alliance, between spectacle and art,” Roberta Smith, The New York Times’ co-chief art critic, once wrote. She was reviewing Sleepwalkers, an epic exploration of urban isolation, starring Cat Power and Tilda Swinton, projected onto the façade of MoMA in 2007.

Station to Station: A Nomadic Happening (2013), seems to fit into this category. A neon train that shuttled between the Atlantic and the Pacific, the work, which was sponsored by Levi’s, featured “happenings” – including performances from the likes of Patti Smith and Beck, catering by chef Alice Waters.

But Aitken doesn’t care about aesthetic hierarchies. In our late capitalist world, of course, we’re assaulted by images that borrow the logic of advertising. Aitken is intrigued by the ways we’re bound together by forms of communication.

“One of the most incredible creations of the 20th century is the perfect pop song,” he points out.

Case in point: I Only Have Eyes For You, written in 1934 and famously covered by The Flamingos and Art Garfunkel. In 2012, Aitken showed Song 1, a hypnotic video work in which the song flies between listeners, a man in a factory, a woman in a parking lot. Aitken’s subjects sing alone to themselves, mouthing the lyrics, threaded by rogue melody. Song 1, to be presented at the MCA in December, was originally made for the façade of the Hirshhorn Museum in Washington. 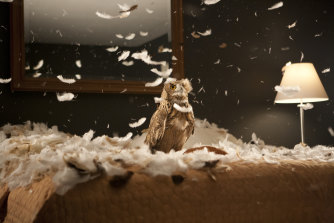 “There are no real links between the characters of the work, except this kind of song moving through the air or a tempo of a car on a highway or someone whispering to themselves waiting in a café,” he smiles. “It was a way of talking about the modern condition by using something that is almost subconscious.”

“When Doug talks about landscapes, he talks about the real and the virtual,” says Kent. “When you look at a cinema screen, it is in what you call a landscape format.”

Now, we connect with our loved ones on FaceTime, over Zoom. In late July, Mark Zuckerberg announced plans to turn Facebook into a “metaverse” company, a virtual universe where people could become their digital avatars. Pixels recast as flesh.

“I found myself really wondering one day, where did this come from?” Aitken says. “We don’t put a human face to technology’s advancement, it feels like it just moving without us in a way [that is] weightless.” 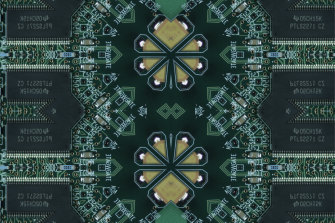 Cooper, Aitken tells me, once believed that the mobile phone was a ticket to freedom.

“There was this idea that we as humans were being tethered to place to the cables on our phones, waiting for them to ring,” he says. “[Cooper’s] view was that humans are inherently nomadic, so they should roam. We should cut the cord.”

How optimistic that was! The mobile phone, Aitken says, was fuelled by a desire for liberation. In New Era, soundtracked to pulsing techno, Cooper stands on a beach. Freeways, sprawl in every direction and keypads expand and contract like a kaleidoscope.

“I think [now] we see something radically different,” he says. “This period of hyper-connectivity, this sense of the inescapable. You can’t turn it off. You can’t remove yourself from the screen world.”

If as Aitken puts it, we’re living through a “tremendous period of self-reflection,” his art may help us see ourselves a little better.

“Maybe this period of time has allowed us to really question our choices, the speed of our lives, the quantity of information,” he says. “And in opposition to that: what really matters? How much is enough?”

Doug Aitken: New Era is at the Museum of Contemporary Art until February, with his largest ever moving image installation, SONG 1 (2012) opening in December.