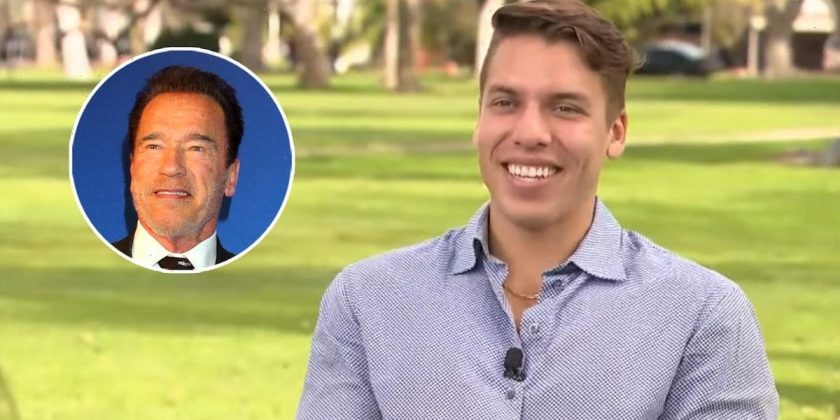 Arnold Schwarzenegger’s son Joseph Baena is an aspiring actor, but he has a pretty sweet “side hustle:” real estate!

In a new interview with Inside Edition, it was revealed that the 24-year-old — who is the son of Schwarzenegger and his former housekeeper, Mildred Baena — is now selling real estate and recently got his real estate license. The majority of the interview took place at a $25 million listing in Beverly Hills, with Baena giving Inside Edition a peek inside the mansion.

During the conversation, Baena opened up about his aspirations to become an action star like his father and revealed why he doesn’t use his father’s last name. 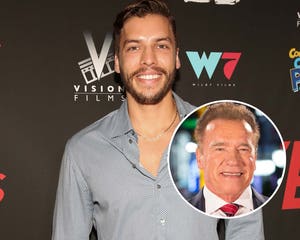 “You have a famous last name, but you don’t use it,” Inside Edition reporter Victoria Recano asked Baena, kicking off the interview.

“Well I already have a last name, and I don’t have a problem with my last name,” Baena explained. “I like my last name.”

After the interview then cut to a clip of Baena recreating “Terminator 2,” the aspiring actor spoke about his hopes for a career in Hollywood, and in particular, shared whether he believes he’ll be compared to Schwarzenegger.

When asked if he feels that he has “big shoes to fill,” Baena quipped, “Well, literally we have the same shoe size,” before adding, “I’ve never thought of it in that way. My career path is really just my own.”

Meanwhile, Baena went on share his thoughts about growing up in the public eye.

“The media’s never been like — well, it’s always been in my face — but I kind of just drown it out,” Beana told Recano. “It’s like outside noise.”

Beana went on to share why he feels inspired by both of his parents.

“My mom is one of my main motivators, and seeing her and how she works so hard, I want to make her proud,” he explained. “Same with my father. What he made of himself from nothing. I mean, both of my parents are immigrants that kind of created something out of nothing.”

“So, seeing them, it’s been a huge inspiration, and I want to make them proud,” he added. “I want to myself proud.”

The interview concluded with Baena working out at Gold’s Gym in Venice with Inside Edition. The gym was made famous by Schwarzenegger and catapulted him into fame.

“There’s so much history. Nothing really beats this place, because of the energy and the community that’s here,” Baena explained.

Earlier this month, Baena opened up about his relationship with his father and how their father-son bond originally had a bit of a slow start.

“I also have to point out that with my relationship with my dad it took a little while for me and him to get really close and just [feel] like I can joke around with him and talk about anything,” he said during an appearance on the “Unwaxed” podcast, which is hosted by Sylvester Stallone’s daughters Sophia and Sistine Stallone.

“I grew up with my mom and I was always nervous and I didn’t want him to think bad of me and be like, ‘What the heck is this guy doing? He’s just partying all the time,'” Baena admitted. “Now it’s like awesome. I’m so close to my dad and we joke about everything.”

The two are often spotted together on each other’s Instagram profiles. Back in October 2021, Schwarzenegger wished his son a happy birthday on the social media platform.

“Happy birthday Joseph! I am so proud of you and I love you! You are crushing it in the gym, in your real estate career, and in acting,” the actor captioned his tribute to his son. “I know this will be another fantastic year.”

In addition to Baena, Schwarzenegger also has four kids with his ex-wife Maria Shriver: Christopher, 24, Patrick, 28, Christina, 30, and Katherine, 32.

According to Baena’s Instagram bio, he’s a realtor at ARIA Properties.