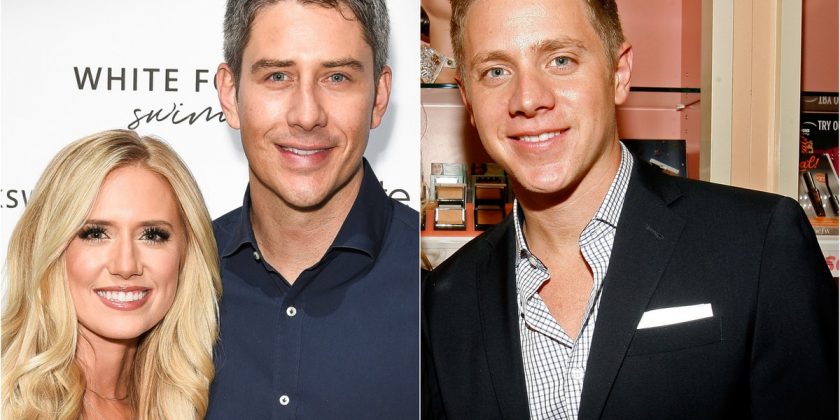 Bachelor Nation has just rung in the Year of Colton, but last year’s franchise lead Arie Luyendyk Jr. is ready to cash in on his Bachelor experiences. Set to marry his (second) Final Rose pick Lauren Burnham on Jan. 12 and expecting his first child with Lauren, the race car driver has an exciting 2019 in store, but he’s not giving up on a certain someone’s past promises. You may have to brush up on your franchise history to understand Arie’s feud with the winner of his Bachelorette season, but Arie Luyendyk Jr. and Jef Holm’s Twitter fight is proving that some grudges never die.

As you probably know, the 37-year-old’s Bachelor casting inspired a wave of confusion among fans back in 2017, as he hadn’t appeared on the franchise since he finished as the runner-up on Emily Maynard’s 2012 Bachelorette season. Single mom Emily ultimately sent Arie home right before the proposal stage, citing uncertainty as the reason why. She then accepted a marriage proposal from Jef, then a 27-year-old entrepreneur who famously arrived on Night One via a skateboard. The couple split only a few months after their engagement aired on TV, giving the season a rocky reputation compared to some of the more recent Bachelorette love stories.

According to Bachelor spoiler guru Reality Steve, Jef and Arie initially remained friends post-Bachelorette filming despite the latter’s heartbreak. In 2017, the blogger claimed that Arie had a reputation of "hook[ing] up with sorority chicks" and that Jef, now 34, was his wingman. Jef denied the story, tweeting, "I stopped being friends with [Arie] years ago because he’s disgusting." On an episode of Ben Higgins and Ashley Iaconetti’s Almost Famous podcast, Arie then implied that their friendship ended after he disapproved of Jef’s treatment of his date at the 2014 wedding of their fellow Bachelorette contestant Sean Lowe.

This brings us to a tweet Jef posted on New Year’s Day 2018, the day that Arie’s Bachelor season premiered. Clearly not as optimistic about love as he was while on The Bachelorette, Jef wrote, "I’ll give 5k to the charity of [Chris Harrison’s] choice if [Arie] lasts 1 year with anyone."

While we didn’t see Arie’s painful breakup with his first Bachelor fiancée Becca Kufrin on TV until March, the split and his subsequent reunion with runner-up Lauren actually occurred in January 2018. So, contrary to Jef’s prediction, Arie and Lauren have officially been together for almost a full year, squeezing in the trifecta of engagement, baby, and marriage all in that time frame. Mazel tov, kids!

On Jan. 2, Arie called out Jef for his old tweet, tweeting, "Pay up…Put that trust fund money into something positive instead of bottle service." Elite Daily reached out to Holm for comment but did not hear back by the time of publication.

No matter how you feel about Arie, it’s admirable that he has defended his relationship and proven that despite its controversial start, he takes his bond with Lauren seriously. While he definitely isn’t one of the more beloved Bachelors, his tweet has sent franchise fans into a frenzy. Where was this snark at Bachelor Mansion, Arie?

I guess we can assume that Jef hasn’t snagged an invite to Arie and Lauren’s Hawaii wedding. We’ll keep an eye on Chris Harrison’s social media to see if he takes Jef up on his offer.