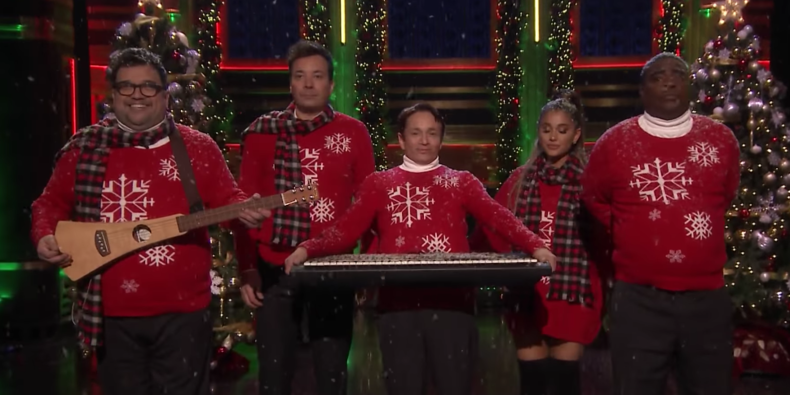 Ariana Grande just made her mark on Saturday Night Live history. On Tuesday night's episode of The Tonight Show, Grande joined host Jimmy Fallon and his former SNL castmates Horatio Sanz, Tracy Morgan, and Chris Kattan in reprising their long-running "I Wish It Was Christmas Today" musical sketch from the show, making her the first guest star to ever appear in any of the quartet's six oddball performances, dating back to 2000.

As momentous as the occasion may have been, Grande's presence had almost zero impact on the now-iconic song. As always, Fallon and Sanz carried the entire group on their backs: Sanz on lead vocals and backpacker guitar, and Fallon singing backup and playing the electric keyboard, getting increasingly more experimental with the keyboard's many bewildering sound effects as the song went on. Kattan, too, reprised his regular role as Fallon's keyboard stand, occasionally whipping his head toward the camera in time with the music, while Morgan simply held a pouty look on his face, moved his hips from side to side, and repeatedly did that inexplicable arm movement we've come to know and love.

Grande was inserted between Kattan and Morgan, where she rested one hand on Kattan's shoulder and barely bopped along to the song, somehow doing even less than Kattan and Morgan ever have for the song—an impressive feat in itself and, truly, the only way a fifth member should ever be added to the already perfect group. She donned the group's usual bright red holiday sweater but, rather than wearing it over a white turtleneck and sensible slacks like the rest of her new bandmates, she wore an oversized version as a minidress, which she paired with thigh-high black boots. Besides this creative interpretation of the dress code, Grande stayed true to the spirit of the song, maintaining a straight face throughout and seeming unperturbed by the rather aggressive amount of fake snow raining down on the group.

Watch "I Wish It Was Christmas Today," version 6.0, here:

Later on in Tuesday's episode of The Tonight Show, Grande performed her new song "Imagine" for the first time since it was released last week. This eventful trip to 30 Rockefeller Plaza was actually Grande's second in the last week: On Saturday, shortly after Davidson posted an alarming message on Instagram and subsequently deleted his entire account, Grande rushed to the building, which also houses the SNL offices and studio. Though she was reportedly kept from seeing Davidson, she tweeted (and later deleted) a message telling him, "I'm not going anywhere."

Related: Ariana Grande's "Imagine": All the Mac Miller Clues in the Song