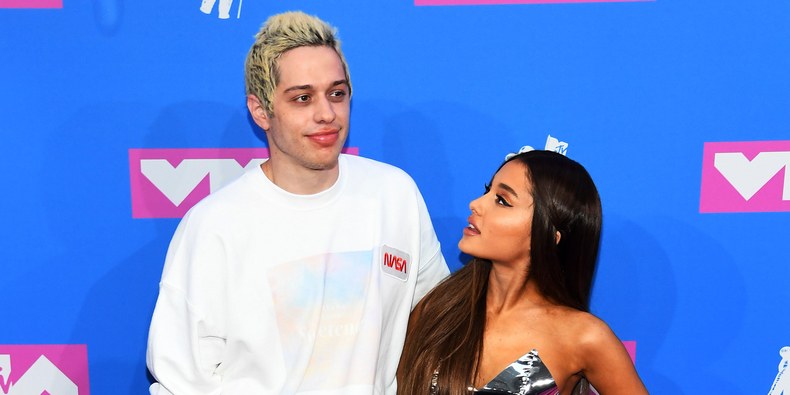 If you give a mouse a cookie, he's going to ask for a glass of milk. And if a comedian milks a recent whirlwind relationship and subsequent breakup for laughs, his ex-fiancée isn't going to just let it slide. Ariana Grande proved as much this week, when, in a series of since-deleted tweets, she appeared to fire back at comments Pete Davidson made about their called-off engagement in a new Saturday Night Live promo. In the clip promiting this Saturday's SNL episode with host Jonah Hill and musical guest Maggie Rogers, Davidson introduces himself to Rogers, then promptly proposes—which, to be honest, feels a lot like the same timeline on which he and Grande were operating earlier this year. Once the singer turns him down, Davidson turns back to the camera and deadpans, "0 for 3."

Grande seems to have stumbled across the promo on her Twitter timeline sometime Thursday evening and, understandably, had a very visceral reaction to it. Though the several tweets she fired off likely in reaction to the clip have since been deleted from her feed, countless loyal fans preserved them in screenshots. "For somebody who claims to hate relevancy u sure love clinging to it huh," she wrote in one such mysterious missive. A minute later, she added, "thank u, next." Finally, she retweeted a post pointing out Rogers's quick rejection of Davidson's proposal and her ensuing discomfort, adding only a period. You know what they say: A single punctuation mark is worth 1,000 words.

But while her tweets are long gone, likes are forever. As of Friday morning, Grande's list of hearted tweets still includes the post about Rogers that she'd previously retweeted, as well as a clip of the faux proposal with the caption, "SNL is about to milk their breakup just like they did with the engagement."

In a new series of tweets Ariana Grande shades Pete Davidson after the comedian joked about their breakup during SNL – “for somebody who claims to hate relevancy u sure love clinging to it huh”. pic.twitter.com/mCSzD7jREL

Per Vulture, Grande went on to tweet-and-delete "hell naw tho," "k that's the last time we do that," and "love u finishing my album," which, together, are reminiscent of and almost as perfectly crafted as her Pulitzer-worthy 2016 proclamation, "not today satan !!!!!! gtg finish this music & live my cute, drama free life !!" In 2018, that entails crafting a "healing" new album and sticking close to a support system that includes a tiny pig and Madonna on speed dial.

Related: In Memoriam of 2018's Most Devastating Celebrity Breakups, So Far

Antoni Porowski had been dating Joey Krietemeyer for about seven years before he became an overnight celebrity thanks to Netflix's Queer Eye, and the show's designated food expert even said that the pair were "basically married." Though, in recent months Krietemeyer didn't appear with Poroski in public nor on his popular social media channels. Us Weekly now reports that the two broke up two months ago, but that they remain friends.