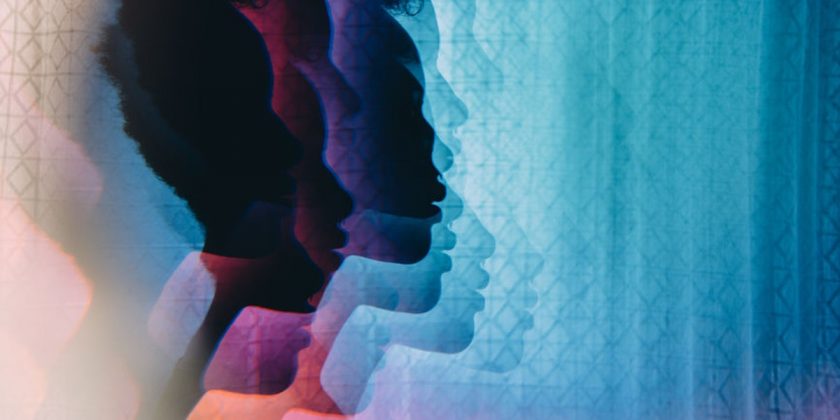 For some people, migraines happen without warning, hitting their body like a ton of bricks. Others, though, can almost predict when a migraine is about to set in, all because of certain warning signals that surface along with the pain. Migraine auras, for instance, "are usually visual," according to the Mayo Clinic, but they can also include "sensory, motor or verbal disturbances" in the body. Basically, it’s when your vision gets really funky in tandem with (or even before) a migraine, and while that alone probably sounds freaky, new research says migraine auras can actually be pretty dangerous if you’re not careful about managing them.

The new study, which has been published in Neurology, the medical journal of the American Academy of Neurology (AAN), found that the changes in your vision caused by migraine auras — which, according to an AAN press release about the study, typically include "seeing wavy lines or flashes of light, or having blurry vision or blind spots" — may be linked to an increased risk of an irregular heartbeat.

I know, I know, as if the whole, my-vision-just-went-foggy-and-my-head-is-killing-me thing isn’t bad enough on its own, now you also have to worry about how your heart, of all things, might factor into the equation. Great.

Migraine auras, irregular heartbeats — if your head is spinning right now, let’s take a second to break down what these things really mean and why they’re important to talk about. First of all, again, a migraine aura, as per the American Migraine Foundation, is when a "series of sensory disturbances" hits you shortly before the migraine itself, and it usually comes in the form of seeing things like "sparks, bright dots, and zig zags," but it can also include "tingling on one side of the body or an inability to speak clearly." As for an irregular heartbeat (aka a heart arrhythmia, an atrial fibrillation, there are a lot of fancy-sounding terms for it), that’s more or less exactly what it sounds like, but as the Mayo Clinic explains, it could mean your heart is beating too slowly, too quickly, or just simply in an erratic rhythm that doesn’t suit your body’s needs. Both an irregular heartbeat and migraine auras, as per the Mayo Clinic and the National Migraine Foundation, respectively, are associated with an increased risk of stroke — which leads us into the current study.

For the study, the AAN press release explains, researchers followed nearly 12,000 people (with an average age of 60) for 20 years to see if those who experience migraine auras would be more likely to develop any heart health issues over that period of time. Over the course of those two decades, researchers closely monitored roughly 9,400 people without headaches, and about 1,500 people with migraines, and in the latter group, about 400 people said they experience auras with their migraines.

Long story short, even after taking into account other potentially influential factors, like sex, age, blood pressure, smoking, etc., the study’s results showed that people with migraine auras are about 30 percent more likely to develop an irregular heartbeat compared to those who don’t get migraines at all, and roughly 40 percent more likely to develop similar heart health issues compared to people with non-aura migraines.

To put this in perspective, the study’s press release notes that about nine out of 1,000 people with migraine auras may experience an irregular heartbeat, compared to seven out of 1,000 people who experience migraines, but not auras. What’s most important to point out, though, is that with the increased risk for an irregular heartbeat, comes a potentially higher risk for stroke, too, according to this new study. And again, migraine auras, on their own, have already been linked to stroke, as per the American Migraine Foundation. So, in other words, the combination of migraine auras and irregular heartbeats is not a good one for your body, but unfortunately, it seems like the two do tend to overlap sometimes.

Now, if you have migraine auras yourself, none of this is meant to scare you. Still, it never hurts to know the nitty-gritty details of what you’re actually dealing with when it comes to your body, and it’s always helpful to know how you can tackle these issues safely and effectively when they come up. Study author Souvik Sen, MD, MS, MPH, of the University of South Carolina in Columbia, said in a statement for the study’s press release that an irregular heartbeat "can be managed through medication," meaning it’s really not a life-threatening thing to worry about, but the main issue, he explained, is that "many people do not [even] realize that they have [an irregular heartbeat]." And as for migraine auras, there’s no specific treatment for the weird sensory experiences themselves, according to the Mayo Clinic, but various prescription medications are used to soothe the pain of the migraine, the medical center explains.

Bottom line: If you get auras with your migraines, but this whole business about an unusual heartbeat is a completely new concept to you, make an appointment with your doc to talk it over. Again, it’s probably nothing to worry about overall, but the main takeaway here is that knowledge is power, and that it’s always a good idea to advocate for your own health.