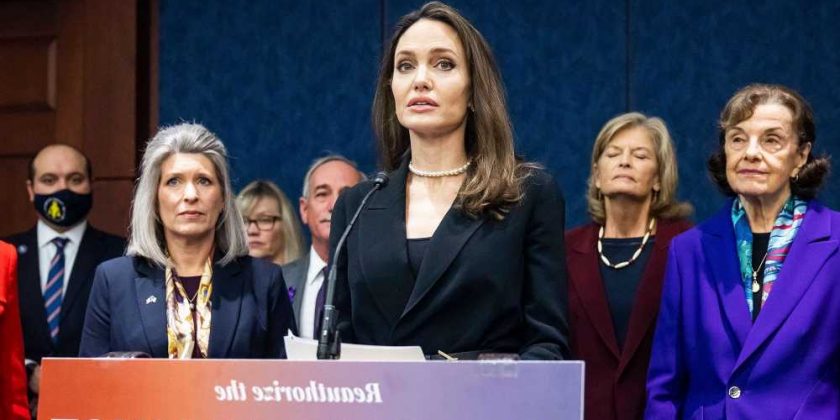 Being an advocate. Angelina Jolie gave a poignant speech while discussing domestic violence, urging the U.S. Senate to vote in favor of renewing the Violence Against Women Act.

“The reason that many people struggle to leave abusive situations is that they’ve been made to feel worthless,” the 46-year-old actress began her speech on Wednesday, February 9, while in Washington, D.C. “When there is silence from a Congress too busy to renew the Violence Against Women Act for a decade, it reinforces that sense of worthlessness. You think, ‘I guess my abuser is right. I guess I’m not worth very much.’”

The Maleficent star — who was joined by her and Brad Pitt’s 17-year-old daughter, Zahara, at the press conference — explained that women feeling “worthless” is one of the main reasons why “passing this law is one of the most important votes U.S. senators will cast this year.” 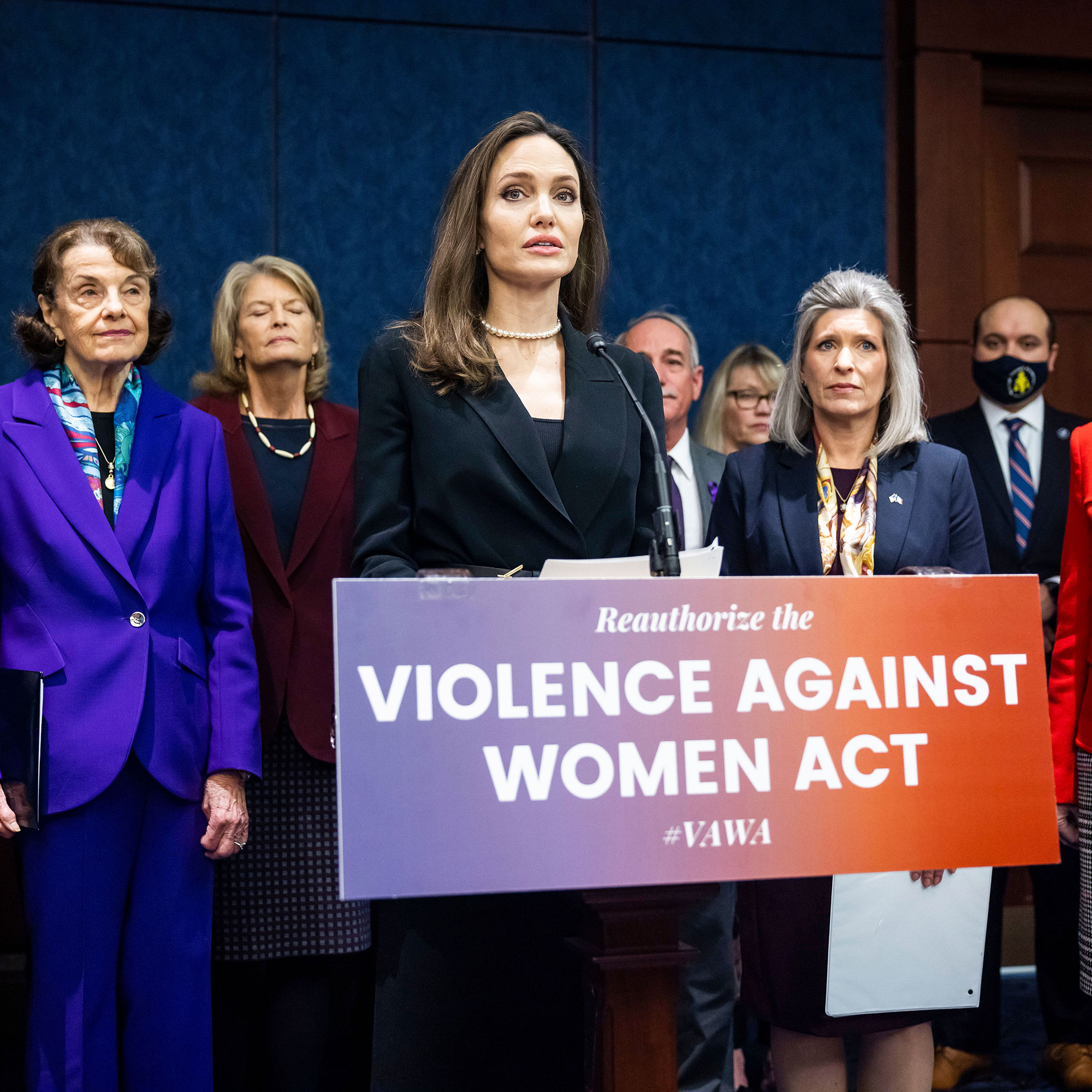 Jolie pointed out that the “ugly truth is violence in homes is normalized in our country,” which is why many victims have allegedly not gotten the help and support they need after dealing with an assault. The Violence Against Women Act has not been amended since 2013.

“As survivors of abuse know all too well, victims of our vailed systems are not allowed to be angry. They’re supposed to be calm and patient and ask nicely,” she continued. “But you try staying calm when it’s as if someone is holding your head under water and you’re drowning. Try to stay calm when you’re witnessing someone you love being harmed.”

Angelina Jolie Through the Years: From Movie Vixen to Mom of 6

The Girl, Interrupted actress — who also shares Maddox, 20, Pax, 18, Shiloh, 15, and twins Vivienne and Knox, 13, with the 58-year-old Fight Club actor — held back tears as she spoke about the children who are affected by domestic violence and the women who the system as failed.

“Most of all, I want to acknowledge the children who are terrified and suffering at this moment. And the many people for whom this legislation comes too late,” Jolie said, getting choked up. “The women who have suffered through this system with little or no support, who still carry the pain and trauma of their abuse. The young adults who have survived abuse and emerged stronger. Not because of the child protective system, but despite it. And the women and children who have died, who could have been saved.” 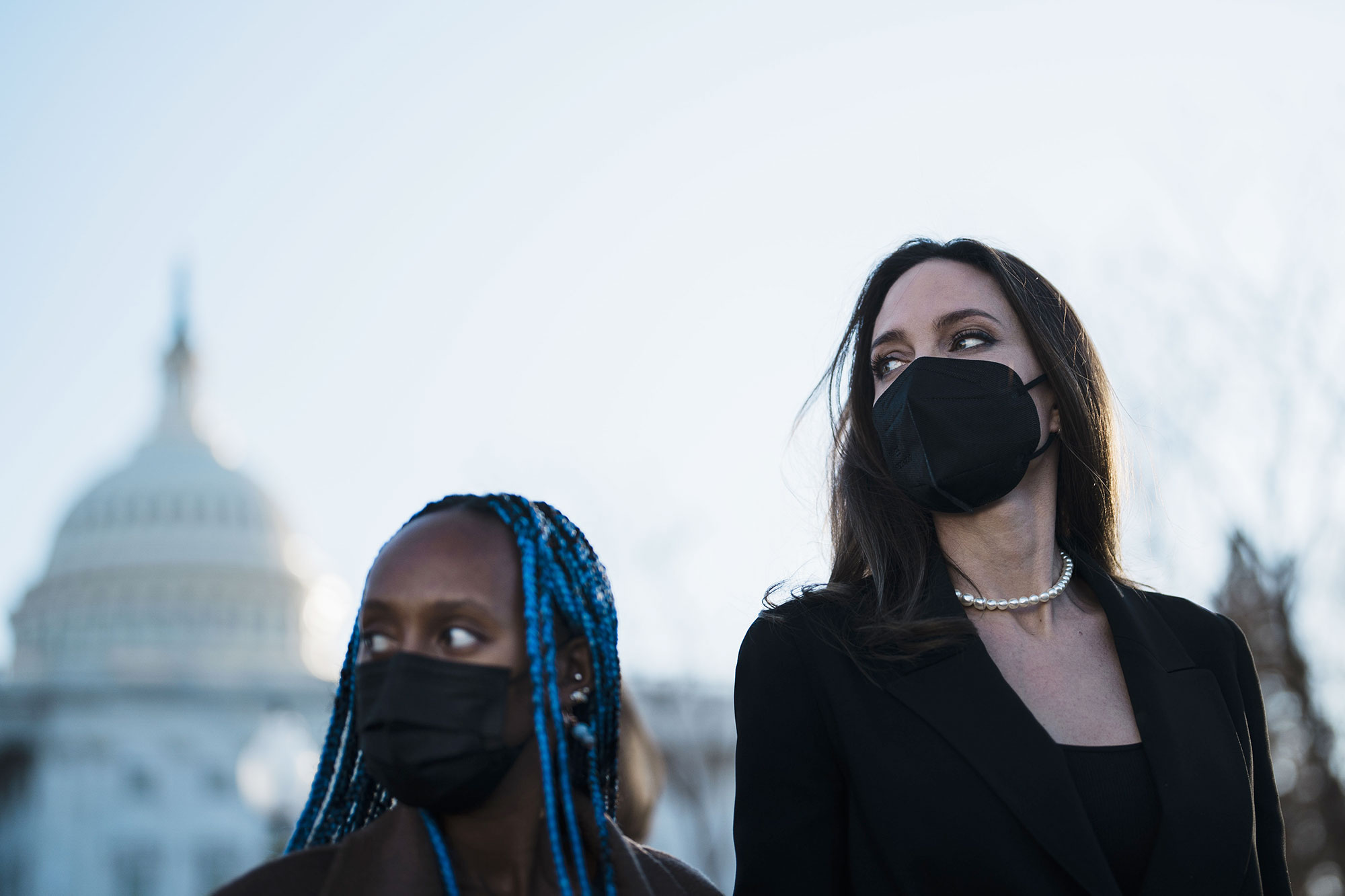 The Oscar winner shared a behind-the-scenes moment with Zahara ahead of the press conference on Wednesday, as the women looked over Jolie’s speech together.

“Heading into the Senate’s introduction of the Violence Against Women Reauthorization Act, I’m grateful and humbled to join with dedicated advocates and legislators,” the California native wrote via Instagram. “I’m also glad to share in the advocacy with Zahara — and for her presence to calm my nerves before today’s press conference.”

Jolie also met with the head of the Environmental Protection Agency, Michael Regan, while in town.

The trip came two months after the Salt actress previously appeared at the nation’s capital to advocate for the same bill. Zahara was again by her mother’s side as they continue to be allies for women and children affected by domestic violence.

Celebrity Charity: Stars Who Give Back

The domestic violence bill appears to be close to Jolie’s heart, as the Lara Croft: Tomb Raider actress previously claimed she has “proof” of alleged domestic violence against ex-husband Pitt. In March 2021, Jolie filed court documents regarding the alleged incidents, stating that she and her children were willing to offer “authority in support” of their claims against the Ocean’s Eleven star.

However, a source close to Pitt exclusively told Us Weekly at the time that the filing was nothing more than an attempt to “hurt” the actor amid the pair’s ongoing child custody battle. The twosome split in 2016 after two years of marriage. While they were declared legally single in 2019, the former spouses have yet to come to a custody agreement of their six children.

“Over the past four and a half years there have been a number of claims made by Angelina that have been reviewed and not substantiated,” the insider said. “The children have been used by Angelina to hurt Brad before and this is more of that behavior. This leaking of documents by her fourth or fifth set of lawyers has been done to hurt Brad.”

If you or someone you know are experiencing domestic violence, please call the National Domestic Violence Hotline at 1-800-799-7233 for confidential support.