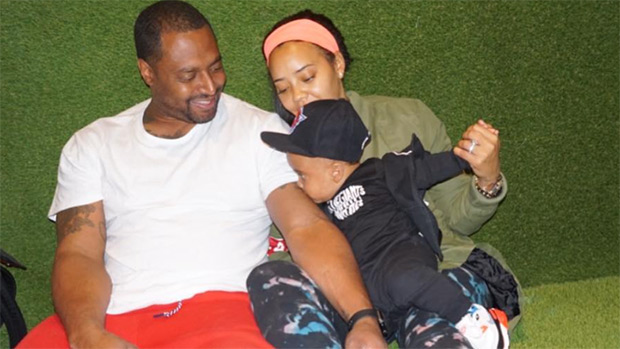 Angela Simmons is in mourning. Hours after her ex-fiancé was killed she paid a public tribute to him and an insider tells HL EXCLUSIVELY that she’s ‘traumatized.’

Angela Simmons, 31, is understandably heartbroken over the death of her ex-fiancé Sutton Tennyson who was shot and killed in the garage of his Atlanta, George home on Nov. 3. The 37-year-old was the father of the Growing Up Hip Hop star’s son, Sutton Joseph, who turned 2 in September, and the young mom is sharing her grief with her social media followers. Hours after the news broke on Nov. 4, Angela took to Instagram to pay tribute to her ex with a heartrending message and a gallery of pics.

Angela wrote, “Thank you for leaving behind my greatest gift. I’m hurting. I’m numb. Thank you for the out pouring of love everyone. I can’t believe I’m even saying Rest In Peace Sutton. I promise to hold SJ down in every way I promise.” The pics that Angela shared included one of Sutton holding on to their toddler son and another of her resting her head on her ex’s lap, presumably before they split in 2017. She also shared an adorable video of their son holding on to his dad’s head as they walked along a street together.

Thank you for leaving behind my greatest gift . I’m hurting . I’m numb. Thank you for the out pouring of love everyone . I cant believe I’m even saying Rest In Peace Sutton . I promise to hold SJ down in every way I promise ❣️

So too did Angela’s famous family, including her uncle, music mogul Russell Simmons (who posted a heart emoji) and his ex-wife Kimora Lee Simmons, who wrote, “We love you and are praying for you and always have your back!! We are right here for you.”

Meanwhile, an insider tells HollywoodLife EXCLUSIVELY: “Angela is beyond traumatized by Sutton’s murder. Words cannot even begin to convey her pain and angst. At this point Angela still isn’t able to really get her head around the fact that she will never see Sutton again and that her son is going to grow up without a father.” The source adds, “Angela and Sutton had their fair share of problems over the years, but he was always going to be a part of her life and the fact that he has been taken from her in such an awful manner is just sickening. Angela feels that her life will never be the same again, and right now, all she can focus on is getting through today. The thought of a future without Sutton in it is just heartbreaking and more than she can deal with at this moment in time.”

In another heartbreaking post, Angela shared a clip of her son Sutton watching himself playing with his late father in a swimming pool on a cell phone. She captioned the video, “Reflecting. He keeps replaying it. RIP Sutton.” Sutton and Angela got engaged in April 2016 but eventually split in 2017. Our hearts go out to Angela during this difficult time.