On the new ‘And Just Like That,’ Steve goes to Carrie for answers about Miranda and Che in the wake of Miranda asking for a divorce. Plus, Carrie makes a decision about her dating life.

While at lunch, the And Just Like That women discuss a variety of topics. Carrie reveals that she’s decided to have a do-over date with the widowed teacher, Peter. Miranda asks the girls to help her finish painting a women’s shelter. Carrie wants to just write a check, but Miranda won’t let her. Charlotte uses this opportunity to say that she hasn’t gotten her period in 4 months and believes she’s finally in menopause.

Carrie’s young downstairs neighbor brings her a ring to wear while she’s out and about. The neighbor is hoping to make a career out of being a jeweler and not a model. She points out Carrie’s wedding ring, and Carrie admits that she just hasn’t taken it off yet, despite her husband being dead. 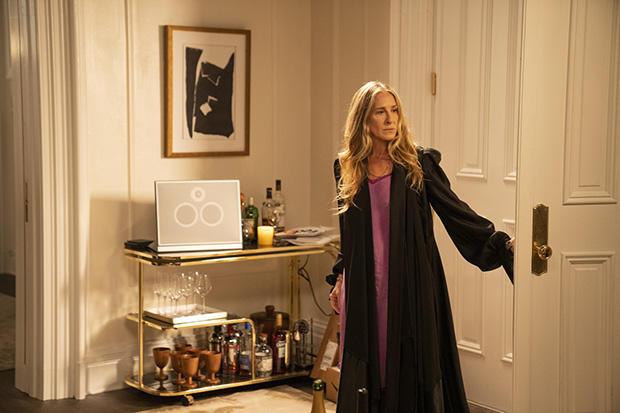 Miranda Freaks Out On Che

Lily freaks out over the fact that she’s scheduled to have her period at an upcoming pool party. Apparently, she doesn’t use tampons. Charlotte says Lily can learn to use a tampon or skip the pool party altogether.

Charlotte’s making dinner when Lily is finally ready to learn how to use a tampon. Anthony brings a date named Justin, who is immediately kicked out when says the “Holocaust is a hoax.” After some encouragement from Charlotte, Lily figures out the whole tampon situation.

Che and Miranda are happily dating, but Miranda seems to think this is a full-fledged relationship. While taking some fan pictures, Miranda mentions that she is Che’s “girlfriend.” Later, Miranda shows up at Che’s place with cookies. Che is caught off guard and in the middle of writing. When it becomes clear that this is not a great time, Miranda bolts in the most awkward way. Che goes after Miranda and explains that this isn’t going to work if Miranda’s looking for a traditional relationship. “This has to work!” Miranda yells. Che goes on to say that they’re not dating, they’re just “getting to know each other.”

Seema and Carrie go out to a club. Carrie ponders whether or not she should be wearing her wedding ring anymore. Seema wants to go dancing on her birthday but doesn’t want to make a fuss. Carrie tries to bribe the bouncer, and it doesn’t work out like she hoped it would. 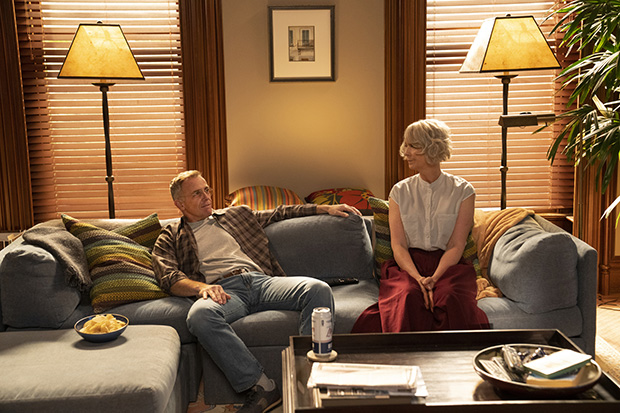 Before her next date with Peter, Carrie decides to keep her wedding ring on and put Big’s ring on. Peter is very understanding of why she’s keeping the rings on for now. They don’t go out on their date as planned. He calls this the “best rejection ever.”

At the women’s shelter, Steve shows up with Brady. Steve asks to work with Carrie so he can grill her about Miranda and Che. He wants to know when the fling started because this whole divorce situation has hit him “fast.” He asks if Miranda ever said anything to Carrie about wanting to be with women. Carrie says Miranda never said a thing.

However, she does tell Steve that Miranda said it’s not about being with women, it’s about being with Che. When Steve continues to ask questions, Carrie conveniently steps in paint. When she goes to wash her shoe off, Big’s wedding ring falls down the drain. Carrie freaks out and Steve quickly steps in to save the day.

Meanwhile, LTW brings her kids and husband to help out. Nya’s husband, Andre, looks longingly at the happy family. While Nya is pretty decided on not wanting kids, Andre isn’t so sure. “I just feel that I want one,” Andre tells Nya. He doesn’t know if he should be working so hard to talk himself out of it. 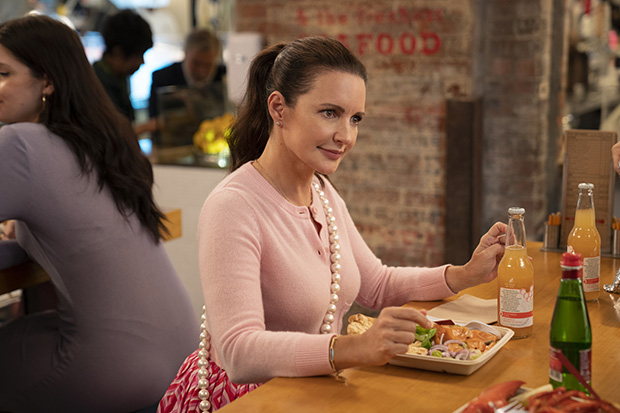 Lily’s tampon woes continue. Her string has disappeared. Charlotte takes Lily to a port-a-potty to help her locate the string. Lily does eventually find it, thank goodness. However, Charlotte’s not quite done with Flo just yet. She starts her period while wearing an all-white outfit. Miranda says this is a flash period.

Steve’s Not Over Miranda

Carrie apologizes for freaking out on Steve about Big’s ring. Steve understands where Carrie’s coming from. “This ain’t never coming off. I don’t care what Miranda does and with who. Till death do us part,” Steve says. Carrie asks if he wants to find someone at some point. “Never coming off,” Steve reiterates about his wedding ring. Steve’s not over Miranda whatsoever.

Carrie decides to take a step towards moving forward and texts Peter about another date. Maybe third time’s the charm?