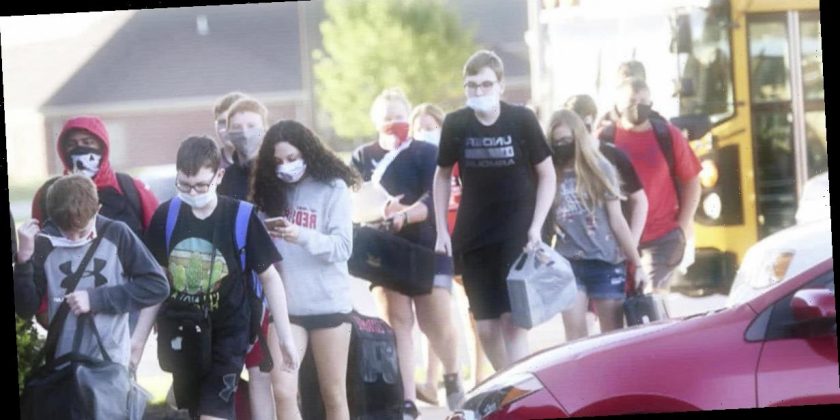 Parenting has long been marked by difficult decisions — whether to breastfeed, where to send your kids to school, whether to work or stay home — but for many, the decision forced by the coronavirus between virtual and in-person learning was the most impossible choice they’ve ever had to make as parents.

“To be honest with you, I didn’t think I would be able to make a decision,” said Candice Straughter, a mother of two in Nashville, Tennessee. “I just thought this is going to be the hardest thing ever. There’s no way I’m going to be able to decide whether to send them or keep them home.”

“I changed my mind at least five times,” said Kate Nurre, a mother of two in Iowa.

No matter how long they sat with the decision, parents couldn’t rectify the fact that both options carried life-altering consequences.

“This literally is the first time I’ve had to look at a situation and ask myself if I’m going to put my child’s life in danger because of the fact that I need my job,” said Nicki Beck, a mother of two in Indiana.

“We’re stuck with a bunch of options that each have downsides and are going to leave somebody in a vulnerable position,” said Jody Sanders, a father of three in Texas.

Most who ultimately decided to keep their kids home, opting for the virtual route, pointed to the obvious: safety.

“As a parent, their health literally trumps everything,” said Bryan Cureton, an army specialist and father of two in Indiana. “Being in the military, you have to take calculated risk. And any time you can get the mission done with zero risk, that’s a no-brainer for me. Even if it takes longer or it’s tedious, that’s too easy.”

Some parents, however, didn’t have the option to stay home.

“I’m essential, so my job doesn’t involve working from home,” said Beck. “If I would have had to quit, then we would’ve been without insurance during a pandemic. … How do you decide what’s more important, you know? Having your home and having the ability to provide for these kids that you made? Or do you stay home to keep them healthy?”

For some, the choice to send their kids back to school meant saying goodbye to their own parents for the foreseeable future.

“In August, we had like this series of goodbye parties with family, with grandparents, because we don’t know what will be safe,” said Maia Canlas, a mother of two in New Jersey. “My mother passed away a couple years ago, and so I feel my sole job with my dad, even if he doesn’t want to listen to me, is to keep him alive for as long as possible. And I would never be able to forgive myself if he was exposed.”

Parents of children with special needs also had that to take into account. Pittsburgh mother Melinda Wedde, for example, knew that her autistic son would struggle to keep a mask on for a full school day.

“I have no problems with masks, but I feel like he’d get uncomfortable and want to pull it down, or get hot. And I just feel like he’d end up getting in trouble,” she told CBS News. “When he is at school, he uses a standing desk or has freedom to walk around and switch different types of chairs. And they can’t do that.”

Regardless of the choice they made, parents on both sides of the decision told CBS News that they often doubted it.

“My son actually felt a bit sick. He was feeling dizzy and nauseous, and my head went straight to that place,” Canlas said. “Here we are, two weeks in, and my son is starting to feel sick and I made the wrong decision. Luckily it was just a fluke and he’s back in school, but I will say I didn’t sleep the night in between because you’re trying to keep everything afloat, but at the same time I was just like, why am I doing this?”

“I cried about it,” says Beck. “Like there were nights where you would just stay awake and you would think, what kind of mother am I to send my kids to school during a pandemic?”

And that sort of doubt isn’t reserved for parents who chose to send their kids back to school.

When asked if there were ever days so stressful she questioned the choice to keep her kids home, Candice Straughter responded, “Every day.”

Those who ultimately chose in-person schooling pointed to the benefits of socialization, in-person teaching and not having to simultaneously juggle working and parenting, undermining their performance at both. Those who chose to keep their kids home lamented the loss of those things. For parents this school year, there was simply no option without downsides.

“There was no right answer,” Beck observed. “You weren’t going to win if you sent your kids to school or if you kept your kids home. There was no winning.”