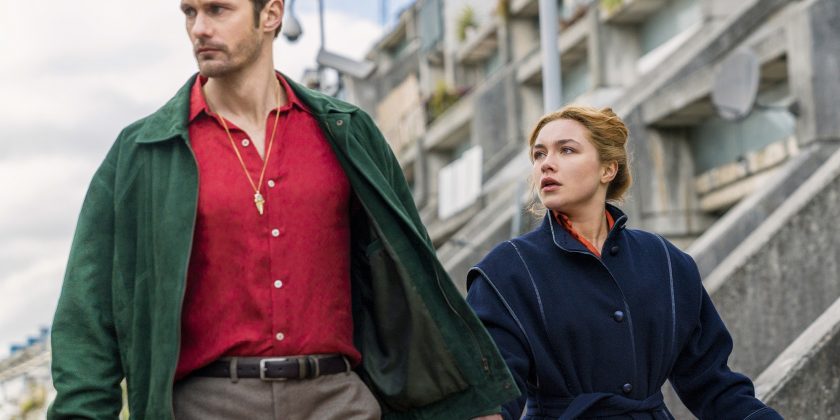 In 2016, AMC lucked out with an adaptation of John le Carré’s “The Night Manager,” a sexy, suspenseful spy story that almost launched Tom Hiddleston’s career as the next James Bond — and showcased Hugh Laurie’s performance as a cold-blooded arms merchant.

With backdrops in the Mediterranean, Middle East and the Swiss Alps, the series was an instant stylish seduction. As if that wasn’t enough, Hiddleston’s fans went apes–t on social media when he bared his butt in a love scene with co-star Elizabeth Debicki.

One understands why Le Carré’s sons wanted to rush another adaptation of their father’s work to the small screen. But “The Little Drummer Girl,” which was previously made into a 1984 film with Diane Keaton, pales in comparison. Fans expecting sexual tension on the order of Hiddleston and Debicki will stifle yawns when they see British “It” girl Florence Pugh throw herself at Scandinavian stud Alexander Skarsgård. She looks young enough — and short enough — to be his teenage daughter.

Pugh plays fledgling British actress and leftie Charlie Ross, emoting in the fringe theater production of “Saint Joan,” when Mossad operative Gadi Becker (Skarsgård) spots her as the ideal candidate for an undercover operation. They meet in person when Charlie’s theater company receives a mysterious invitation to work in Greece. A date on the Acropolis turns into a kidnapping as Becker takes her to meet his fellow agents, including the mastermind Martin Kurtz (Michael Shannon, typically evil), who have joined forces to avenge the bombing death of an Israeli child in Germany by a Palestinian terror cell. They would like her to infiltrate the Palestinian group, posing as the girlfriend of the brother who delivered the bomb to the Israeli diplomat. It is described as the “role of a lifetime.”

Charlie’s motivations for going along with their scheme, as betrayed by Pugh’s bewildered expression, seem unconvincing. Why does a nobody actress think she has enough political clout to score points for the Israelis?

Why doesn’t she try to escape when she is asked to deliver a cache of explosives in Austria and is left alone behind the wheel of a Mercedes? The mechanics of the spy plot unfold sluggishly as admired Korean director Park Chan-wook shows Becker “training” Charlie for her role in the scheme. By contrast, “The Night Manager” had not an ounce of fat on it as it raced to its inexorable conclusion.

The casting also seems unimaginative. Regular cable TV performers such as Shannon, who previously played another in-your-face villain in HBO’s “Fahrenheit 451,” is typecast at this point, and Skarsgård, who played another handsome sleazebag last year on “Big Little Lies,” needs a change of pace, like an Amish farmer or something.

Take a cue from Patricia Arquette or Viggo Mortensen, both unrecognizable in their current roles as Tilly Mitchell in Showtime’s “Escape at Dannemora” and the big-screen feature “Green Book.”