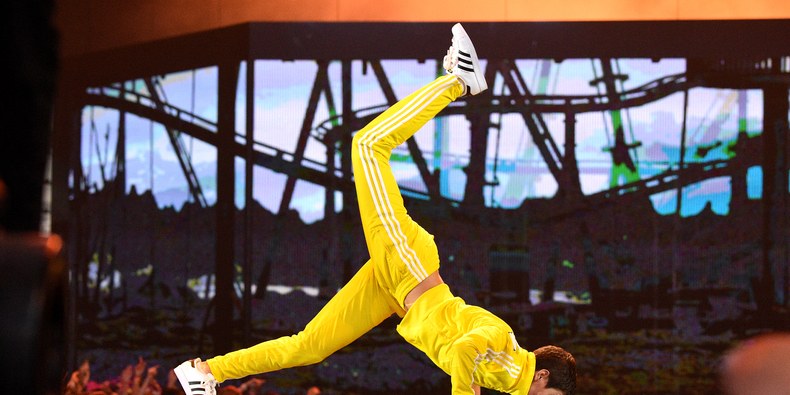 For the first time in a long time, MTV's VMAs felt vital last night. Shawn Mendes and Camila Cabello managed to make not kissing almost as titalating as Britney and Madonna made kissing. Normani announced herself as force to watch. Even the "New Jersey legend" closer, which was easier to mock when it was announced, was a fun watch. Still, it was undoubtedly Missy Elliott's long overdue Video Vanguard performance that was the highlight, and the cherry on top was Alyson Stoner's dance solo.

Stoner went on to childhood fame as a Disney Channel regular, but first shot to people's attention at nine-years-old as a featured dancer in Elliott's classic "Work It" video (she'd also go on to appear in "Gossip Folks" and "I'm Really Hot" with the rapper as well). It was almost a no brainer to include Stoner, now 26 years-old, in the performance, but as it turns out, Stoner only got notice a day before, and didn't even get a chance to rehearse.

When a Twitter user tagged Stoner while musing how much she time she had to prepare for the number, Stoner clarified that she basically didn't.

"HiHat hit me up a day before to jump in, said 'do your thing' and then it was showtime," she wrote. "But those grooves don’t leave your system."

A few hours later, Elliott took to Twitter to praise and thank Stoner as well.

"It’s been 17 years since we did Work I[t] and over the years people always ask me where is that lil girl from your video 'Work It,'" wrote Elliott. "So I couldn’t of done this vma performance without you there!"

Stoner, as should be apparent, has kept up with her dance skills. A video she released in 2015 recreating some of her iconic moves from Elliott videos quickly went viral at the time (it's at over 20 million now). She's also released music of her own, and has maintained a regular voice acting career as well (most notably as Kairi in the Kingdom Hearts franchise). Oh, and she also came out as someone who is "attracted to men, women, and people who identify in other ways" in a Teen Vogue article last year.

Though she had little time to prepare, Twitter wasted no time last night showering her in praise.

Clearly, the Stoner-Elliott reunion was almost as overdue as Elliott getting the Vanguard award, but, with Elliott releasing new music once again, we couldn't mind another joint video either.

Related: The MTV VMAs After Parties Were Just As Noteworthy As the Main Show