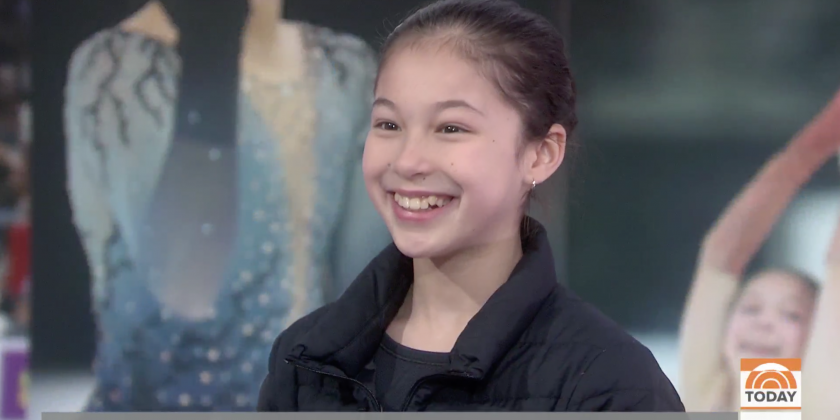 Alysa Liu just became the youngest U.S. women’s figure skating champion in history — but despite her obvious dominance, she can’t even compete on the world stage until 2022.

Still, Liu isn’t bothered by the lengthy waiting period until she becomes eligible to compete at the World Figure Skating Championships in 2022 — and then the next Winter Olympics later that year.

“I can’t even do internationals either, but I get extra practice before,” the 13-year-old figure skater said in an interview with Today on Tuesday.

Liu took home the top prize for women at the U.S. Figure Skating Championship in Detroit on Friday. The skater, who is from Northern California, beat the year’s previous winner, Bradie Tennell, for first place.

During her routine, Liu landed two triple axels. She’s only the fourth American female to land a triple axel in competition, after Tonya Harding in 1991, Kimmie Meissner in 2005 and Mirai Nagasu at the Olympics in 2018. She’s the first to make two.

“Every time I watch I’m like, ‘Yes, I did this, I did this,’ and I’m just looking over everything I did,” Liu said of watching back her performance over the weekend.

She also revealed that she stays mostly calm while tackling the tough spins on the ice.

“I’m telling myself over and over again, ‘I can do it, just do it,’ ” she explained. “I’m actually nervous right before I get on, but me and my coach do our ritual. I jump up and down eight times into a landing position. It’s like a superstition if I don’t do it.”

Liu, who said she started skating at age five, praised her father after for victory, saying, “He just helps me so much, bringing me to the rink every day, and I think he puts in a lot of effort.”

Arther Liu told the Today cohosts that he stays relaxed while watching his daughter perform, mostly because he has “confidence in her.” He told the outlet, “I knew that she was going to deliver.”

Before Liu, Tara Lipinski held the record for the youngest U.S. women’s champion. She won at age 14. The athlete was a commentator during the event.

Liu said on Tuesday that she spoke to Lipinski, who told her, ” ‘I’m so proud of you, records are meant to be broken, and I’m so happy you broke the record.’ “