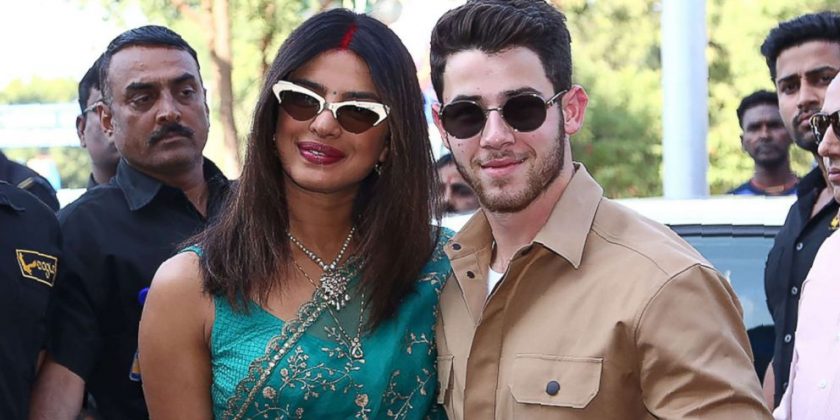 Priyanka Chopra and Nick Jonas tied the knot this weekend in India in front of friends and family and the extravaganza included Indian traditions and an epic family dance battle. Yes, that happened!

It was reported last week that two ceremonies would be held. Chopra, 36, said both she and the guests would need a vacation after this wedding and she wasn’t kidding!

“One of the most special things that our relationship has given us is a merging of families who love and respect each others faiths and cultures,” the actress wrote on Instagram.

She accompanied the heartfelt note with a slew of fun pics from the wedding weekend.

One of the most special things that our relationship has given us is a merging of families who love and respect each other’s faiths and cultures. And so planning our wedding with an amalgamation of both was so so amazing. An important part of the pre wedding rituals for the girl in an Indian wedding is the Mehendi. Once again we made it our own and it was an afternoon that kicked off the celebrations in the way we both dreamed. @nickjonas

“Once again we made it our own and it was an afternoon that kicked off the celebrations in the way we both dreamed,” she added in the post.

Chopra wasn’t done giving the world a peek inside her amazing once-in-a-lifetime weekend.

It all began as a fierce song & dance competition between the families but ended, as always, as a huge celebration of love.  Nick and I were looking forward to the Sangeet (musical evening), another pre wedding ritual.. and to see what each side had put together. And what a performance it was. Each family telling our stories through song and dance, filled with lots of laughter and love. We were both filled with gratitude for the effort, the love and the laughter and will carry the memories of this special evening for the rest of our lives. It is an amazing start to a lifetime of togetherness for our families and friends…#grateful @nickjonas ??/??: @calebjordanlee @josevilla @josephradhik

Jonas, 26, posted his own videos and pics, writing, “What an amazing start to a lifetime!!”

Priyanka and I have been looking forward to the Sangeet (the musical evening and a pre-wedding ritual) to see what each side of the family had put together. We’re both so full of gratitude for the effort and the love put forth by both families. What an amazing start to a lifetime!! @priyankachopra

He made sure to share a nice look at his brothers all dressed up in traditional Indian garb for the big day, captioned “family.”

Last week, the power couple gave an interview to Vogue, previewing their nuptials on Saturday at a palace in Rajasthan.

Over the course of their whirlwind romance, Jonas said he won the Indian icon over by saying heartfelt things like “I love the way you look at the world. I love the drive you have.”

And while Chopra admits she’s never been one to gush about a guy, especially to the press, Jonas is different.

“What is happening? I’ve not known myself like this,” she told Vogue. “This guy turned me into such a girl! If I could blush, I’d be tomato red right now.”

They also told the magazine there would be two ceremonies, one a traditional Indian wedding and the other a Christian service officiated by Jonas’ father.

It was also a three-day event and Chopra said one of her outfits would be a custom gown by Ralph Lauren.

Other guests posted pictures of the big bash as well and we can’t stop looking, staring and dreaming!

For our SANGEET, the Chopra family decided to depict Mimi didi and Nick’s love story though songs, scenes and skit – full bollywood style!!! The whole family rehearsed for days and days. And were ready to beat the Jonas side hollow!!! But when the ladka wallas came on stage, they stumped us. They had been rehearsing for a long time. They sang and danced LIVE, including lip syncing hindi songs!!!!!! Damn, we should have known. ?? All of this – but the spirit of competition was overpowered with love, happiness, laughs, whistles, cheering and noise!!! Wow wow wow. WHAT A NIGHT. P.S. We shared the trophy ??

THE MEHNDI. The job of us bridesmaids was to make sure the bride was happy and comfortable at all times. But we didn’t have to worry about it – coz Nick promised to do it all his life. Welcome to the family Nick jiju!! Im so so happy that the Jonas and Chopra family are now united!!! ??