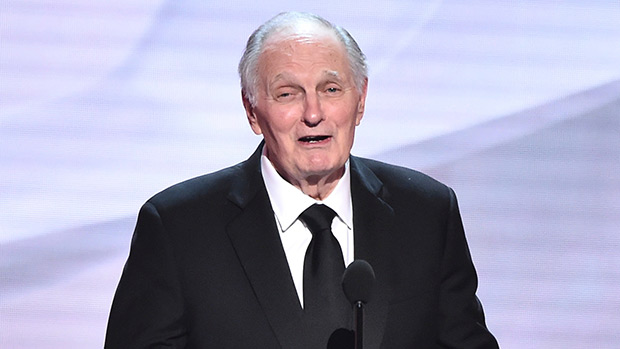 Congratulations to Alan Alda, who was honored with the Life Achievement Award at the SAG Awards on Jan. 27! The ‘M*A*S*H’ actor received a standing ovation from his peers, including Glenn Close and Amy Adams! See his full speech!

Alan Alda received the Life Achievement Award at the 25th annual Screen Actor’s Guild Awards on January 27. Tom Hanks had the honor of presenting Alda with the award live from the Shrine Auditorium and Expo Hall in Los Angeles. He graced the small screen on TV for 11 years in his now iconic role of Korean War surgeon Hawkeye Pierce on CBS’s hit military comedy M*A*S*H. Alda, who is the 55th recipient of the coveted award, follows Morgan Freeman, who took home the honor in 2018.

“The actor we honor tonight … he’s shown us all who we are and what we can be,” Hanks began his introduction to the award. He took viewers back in time, reminiscing over Alda’s iconic career in both television and film, as well as his accomplishments in front of and behind the camera. Hanks presented Alda with the award after he ended his speech with some touching last words, saying that the veteran actor did it all when it came to showbiz.

“It’s really hard to describe to you what it feels like to look out and see my fellow actors, my colleagues, my heroes, to welcome me up like this,” Alda said after he received a standing ovation from his peers. Glenn Close and Amy Adams were just two of the many stars who were beaming with pride and smiling from ear to ear as Alda overlooked the applauding crowd.”It’s an extraordinary feeling. And Tom [Hanks], thank you so much, you killed!”

Alda continued: “The thing is, this comes at a time when I had a chance to look back on my life and think about what it’s meant to be an actor. I see more than ever now how proud I am to be a member of our brotherhood and sisterhood of actors. When we get a chance to act, it’s our job — at least in part — to get inside a character’s head and to search, to search for a way to see life from that person’s point of view, another person’s vision of the world. And, to let an audience experience that. It may never have been more urgent to see the world through another version’s eyes, then when a culture is divided so sharply. Actors can help just a little just by doing what we do. The nice part is, it’s fun to do it. So, my wish for all of us is to stay playful, let’s have fun and let’s keep searching. You can’t solve everything but it wouldn’t hurt. I thank our great union for this and let’s honor the union contract. And, I honor our beloved Tony Howard — thank you, Tony. I share this with everybody in the room.”

SAG-AFTRA president Gabrielle Carteris raved over Alda in an official statement after it was announced he would receive the honor. “It is an honor and privilege to announce that our SAG Life Achievement Award will be presented to the fabulous Alan Alda,” Carteris said back in October. “He is an artist whose body of work is a testament to the craft and the magic of our business. His ability to make us laugh, to think and to feel is extraordinary. From theater to television, movies, and new media, Alan’s dedication and talent are exceeded only by his contributions to a just and caring society.”

Alda recently revealed that he was diagnosed with Parkinson’s disease nearly four years ago. He opened up about his diagnosis, where he admitted that he’s had a “full life since then,” when he made the announcement on CBS This Morning.

“I’ve acted, I’ve given talks, I help at the Alda Center for Communicating Science at Stony Brook. I started this new podcast. And I noticed that — I had been on television a lot in the last couple of weeks talking about the new podcast — and I could see my thumb twitch in some shots, and I thought, it’s probably only a matter of time before somebody does a story about this from a sad point of view, but that’s not where I am,” Alda explained.

“Not to shortchange people who are suffering with really severe symptoms, but in the very beginning to be immobilized by fear and think the worst thing has happened to you — it hasn’t happened to you. There are still things you can do,” he continued.

“It’s like a puzzle to be solved. What do I have to adapt to to carry on a normal life? … It’s a challenge. People have all kinds of things,” he added. Despite his diagnosis, Alda admitted that he hasn’t let it hold him back from living his life. “It hasn’t stopped my life at all,” Alda, who has taken up boxing and tennis since his diagnosis, said. “I’ve had a richer life than I’ve had up until now.”