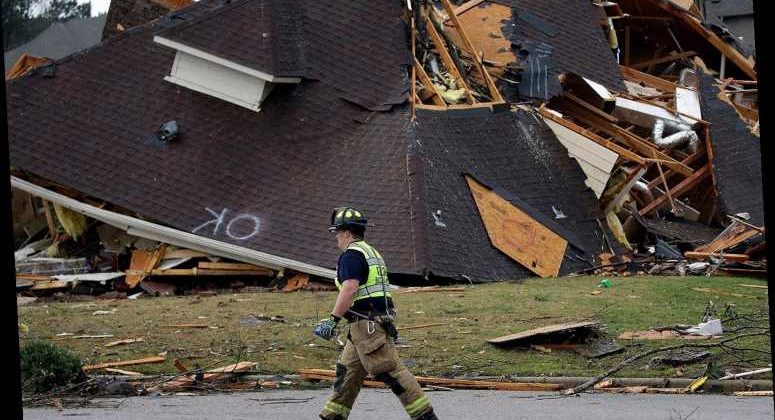 James Spann, the chief meteorologist at Alabama's WBMA news station, experienced a troubling realization on Thursday when he found out his home was hit by a tornado as he was live on television.

According to WBMA, an ABC affiliate, the veteran meteorologist was reporting on a deadly tornado that was sweeping through the state when he realized it was moving toward Shelby County and in the direction of his home, where his wife, Karen, was sheltering.

Fortunately, the couple had a storm shelter that could resist an E-F5 tornado installed when they built their new home a few years ago, and that's exactly where Karen went when the storm approached.

"A huge tree just missed our house!" Karen told the WBMA staff after she came out of the shelter to inspect the destruction to the area. "It's unbelievable! There is so much damage everywhere."

Karen was unharmed in the storm, and Spann — who won an Emmy in 2001 and was named the best weather anchor in Alabama by the Associated Press in 2010 — took a moment to leave the broadcast to check in on her personally, according to the news station. He returned to the air a few minutes later to address the audience.

"The reason I had to step out: we've had major damage at my house," Spann said. "My wife is OK. A tornado came right through there and it's not good. It's bad. It's bad."

Spann later posted an update to social media explaining while many trees were damaged at the property, his home was in no need of major structural repairs.

"Many thanks to all of you who have reached out to me; a tornado produced damage at our home today," Spann wrote in a post to Facebook. "My wife was home when it hit, but she got the warning, was in our in-home shelter, and is fine. While we lost many trees, the home is intact and we will not have to 'rebuild'. Please consider helping others across the state who have much more serious damage… some lost their homes and are homeless tonight. Thanks again for your kindness."

"Thanks again to all of you for your kind words and support," he said in a subsequent update. "A group is coming tomorrow morning to get trees off the house and start the big clean-up. There ARE many people in the state with real needs."

Gov. Kay Ivey declared a state of emergency for 28 counties as the tornado moved through the state, and later expanded it to 46.

At least five people — including a family of three — have died so far, the Calhoun County Emergency Management Agency confirmed to PEOPLE Friday morning. It's not clear how many structures were damaged or how many other people were injured at this time, officials said during a press conference Thursday night.